We are here for you to provide the important Current Affairs February 18 2019, which have unique updates of all daily events from all newspapers such as The Hindu, The Economic Times, PIB, Times of India, PTI, Indian Express, Business Standard and all Government official websites. 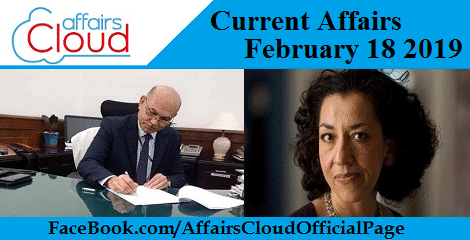 Government has published guidelines to institute EV Charging Stations at every 25 km
The ministry of Housing and Urban affairs has published a set of guidelines to establish charging station for EV (Electric Vehicles) at every 25 km to outline the ways to build fueling points.
Key Points
i. This necessity of instituting charging stations has arrived as government expects that 25% of road vehicles will be electric by 2030.
ii. Norms and standards of Electric vehicles will be incorporated by the building byelaws agencies of the respective guiding documents of the state government and union territories.
iii. For making provisions for establishing EV infrastructures, Ministry has made amendments to the guidelines of MBBL (Model Building Bye laws), 2016 and URDPFI (Urban Regional Development Plans Formulation and Implementation), 2014.
♦ Minister of Housing and Urban affairs: Hardeep Singh Puri

Odisha Chief Minister Naveen Patnaik inaugurated and laid foundation stones for Rs 2114 cr
Naveen Patnaik, Chief Minister of Odisha,inaugurated and laid foundation stones for numerous development projects amounting to Rs 2,114 crore in Kalahandi district on 16th February 2019.
The major projects inaugurated by him were:
i. Ret Medium Irrigation project which is constructed at a cost of Rs 768.46 crore.The project is expected to benefit 79 villages by providing irrigation facility for 8500 hectares of agricultural land under the four blocks of Bhawanipatna, Kesinga, Narla and Lanjigarh in the district.
ii. 38 more developmental projects worth Rs 1346 crore inaugurated out of which 23 projects were completed at an estimated cost of Rs 910.57 crore, while foundation stones were laid for 15 others,expected to incur a cost of Rs 435.28 crore.
iii. The chief minister also released Rs 15,000 each to 11,122 women self-help groups as seed money, Rs 25 lakh each to 14 block-level Mahasanghs, Rs 3000 each to 9836 SHGs as digital empowerment assistance under the ongoing Mission Shakti programme.

A Penalty of Rs 3.5 crore imposed on PNB, OBC and Bank of India by RBI
On 14th February 2019, The Reserve Bank of India (RBI) imposed monetary penalty on three Public Sector Undertaking (PSU) banks due to deficiencies in regulatory compliance with the directions issued by RBI on monitoring end use of funds, information exchange with other banks and on restructuring of accounts. Indianmoney.com Group acquired broking license to enter Insurance Business
Indianmoneyinsurance.com, a subsidiary of the Indianmoney.com Group has acquired a broking license from Insurance Regulatory and Development Authority of India(IRDAI) to enter Insurance Business.
Key points
i. The company will come to process within next few days and is planning to hire 2000 employees before the year ends.
ii. The brokerage also projects to institute 500 purchase centres of insurance across India with an investment of Rs. 4 billion.
♦ CEO of Indiamoney.com – Narasimha B.

Centre has increased Minimum Selling Price of Sugar by Rs 2/kg
Worried over mounting sugarcane arrears,summing up to nearly Rs 20,000 crore at the end of January, the government on 14th February 2019 increased the minimum selling price of sugar by Rs 2 per kg, from Rs 29 to Rs 31 to facilitate millers in timely payment of dues of the sugarcane growers.
The minimum selling price (MSP) is the rate below which the mills cannot sell sugar in the open market to wholesalers and bulk consumers like beverage and biscuit makers.

NPA under Mudra Yojana stands at Rs 7,277 crore
The Parliament was informed by the government on Tuesday that loans by PSBs(Public Sector Banks) amounting to Rs 7,277.31crore under Pradhan Mantri Mudra Yojana (PMMY) had turned into non-performing assets(NPAs) by the end of March 2018.
i. In a written reply to the Rajya Sabha, Minister of State for Finance Shiv Pratap Shukla stated that loans issued under PMMY by all member lending institutions (MLIs) amounted to Rs 5.71 lakh crore, since the beginning of the scheme until March 2018. Loans under PMMY can be covered under Credit Guarantee Fund for Micro Units (CGFMU).
ii. “As on 01.02.2019, over 15.73 crore loans amounting to Rs 7.59 lakh crore have been extended by MLIs under PMMY, since inception of the scheme. Almost 73 per cent of the loans under PMMY have been extended to women borrowers,” Shukla said.
About CGFMU
It was formed to guarantee payment against default in micro loans up to Rs 10 lakh extended to eligible borrowers by the MLIs.

India boosts Customs Duty to 200% on goods imported from Pakistan
On 16th February, 2019, India,with immediate effect has boosted the Customs Duty on all the goods imported from Pakistan to 200%,has followed day after India repealed Most Famous Nation (MFN) status from Pakistan.
Key points
i. This punitory move followed by the Pulwana Terrorist attack on 14th February, 2019 that led to the death of 40 CRPF (Central Reserve Police Force).
ii. This step is likely to strike Pakistan’s exports to India which were $381 million in the April-Nov period and for overall FY18, it was $489 million.
iii. This 200% tariff rate is higher than average bound rate of 113.5% for agriculture products and 34.6% for non-agriculture products.

PC Mody designated as new CBDT chairman
Pramod Chandra Mody, a 1982-batch IRS Officer was appointed as the new chairman of the Central Board of Direct Taxes (CBDT) which is the policy making body of the Income Tax Department. i. He has been appointed in place of Sushil Chandra, who was on Thursday named as Election Commissioner ahead of the Lok Sabha polls due this summer.
ii. Having worked on various posts in the I-T Department, he was currently working as the Member (Administration) in the CBDT.
iii. His tenure would last till June 2019. 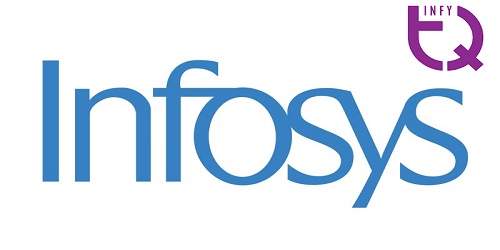 Key points
i. InfyTQ is a free platform available on both mobile and desktop, featured with always-on, anytime, anywhere learning catered through a continuous transfer of digital skills.
ii. The app will assist the students with latest happenings, conceptual and practical aspects of technology, extensive hands on learning, etc.
♦ Infosys CEO – Salil Parekh

106 Coastal and Marine sites got identified under National Wildlife Action Plan
According to a biennial report released by the government, the Centre has identified 106 Coastal and Marine sites as Conservation Reserves under its National Wildlife Action plan for the period of 2017-2031.
Key points
i. This was stated in second biennial update report (BUR) which was made by the Ministry of Environment and Forests and was submitted to UN body on Climate change in December 2018.
ii. According to report, India has been successful to sustain the ecosystem when it is at its edge of disappearing at an alarming rate. Also it will further conserve the coastal and marine ecosystems from the impact of climate change.
iii. Both the coastal and marine areas, provides fish protein to population and contributes in global food baskets, thus provide valuable foreign exchange in turn.
♦ Minister of Environment and Forests – Harsh Vardhan.

Dolphin numbers have shrunk in Odisha, reveals Census
A census carried out by the Odisha’s forest and environment department on January 19, 2019 revealed that the population of dolphins in its waters has drastically declined from 469 in 2018 to 259 this year.
i. The census covered all the significant aquatic ecosystems in the state like the Chilika lake, the Gahirmatha Marine Sanctuary and its nearby areas within the Bhitarkanika National Park in Kendrapara district, Balasore district and the mouth of the Rushukulya river in Ganjam district.
Findings of the census:

Vidarbha clinches the Irani Cup title
On 16th February, 2019, Vidarbha became the only 3rd team Bombay and Karnataka in Indian Domestic Cricket history to defend their Irani cup titles at Jamtha Stadium in Nagpur by defeating Rest of India(RoI). 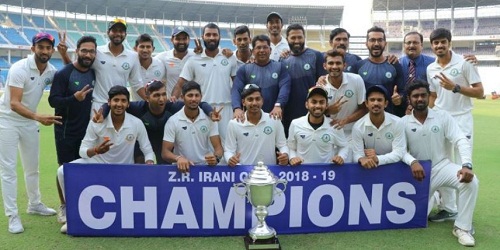 Key points
i. Vidarbha becomes the 3rd team after Bombay and Karnataka to defend the Ranji Trophy and Irani Cup.
ii. Vidarbha chased a target of 280 run on the day and young Karnewar was the Player of the match. 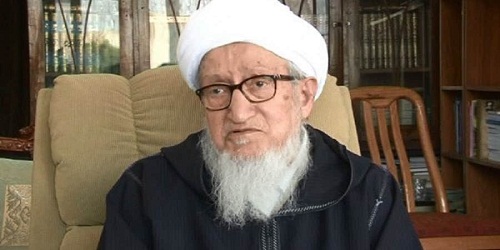 i. He played a significant role in fighting the Soviets and went on to become the interim President of the country after the collapse of the Afghan communist regime with 1992.
ii. He died three days before the 30th anniversary of the Soviet withdrawal from Afghanistan.
iii.In 2003, he served as chairman of the Loya Jirga or Grand Assembly, which approved the Constitution for a post-Taliban era. 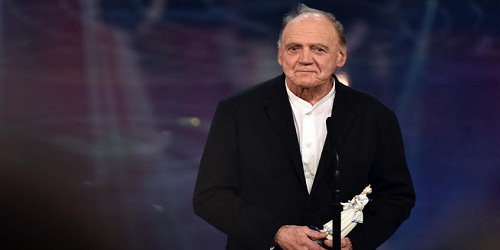 Key Points
i. Bruno Ganz was born on 22nd March 1941 and he was active in German theatre, film and television for more than 50 years.
ii. He was Iffland-Ring holder at the time of death and he was honoured with European Film Academy Lifetime Achievement award and David di Donatello for Best actor.

Best-selling British Author ‘Andrea Levy’ passed away
On 14th February 2019, The best-selling British author Andrea Levy, who explored the experience of Jamaican British people in a series of novel over 20 years, has died from the cancer at the age of 62.She hailed from London, UK. 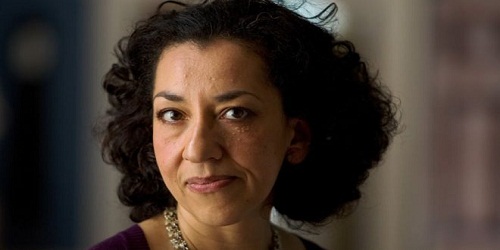 Key points
i. She was known for penning books ‘The Long Song’ and ‘Small Island’.
ii. Her novel “Small Island” was conferred with Orange prize for fiction, Whitbread book of the year, Commonwealth writers prize, etc.
iii. She is said to be the first black British author to achieve both critical and mainstream commercial success.