We are here for you to provide the important Current Affairs February 17 2019, which have unique updates of all daily events from all newspapers such as The Hindu, The Economic Times, PIB, Times of India, PTI, Indian Express, Business Standard and all Government official websites. 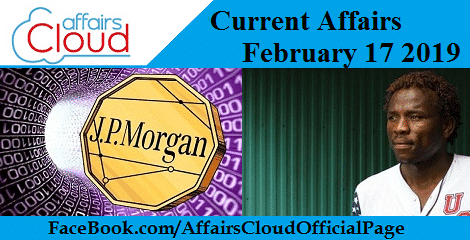 Second National Conference on “Sustainable and Environment-friendly Industrial Production” held in New Delhi
Second National Conference was organised on 15th February in New Delhi on “Sustainable and Environment-friendly Industrial Production (SEIP) Project”. It was organised by Ministry of Environment, Forest and Climate Change(MoEFCC) under Indo-German Development Cooperation.
There were 70 participants including representatives from 18 State Pollution Control Boards and 8 State Industrial Departments-including representation from J&K, Tripura, Jharkhand, Goa, Gujarat, Rajasthan, etc.
About the conference
i. The conference was inaugurated by Shri A. K. Jain, Additional Secretary, MoEFCC. He suggested the concept of Regional Replication Workshops which shall be carried out at various locations in involvement with state local bodies, in the next phase of SEIP.
ii. It was organised for discussion of results, existing successful models and experiences so that they can be further replicated and planned with state agencies, on an all -India basis.
iii. SEIP is joint programme by MoEFCCand GIZ– a German development agency.
iv. The project involved working directly with companies and advising them on environment friendly production and wastewater management in 5 industrial areas in three states(Delhi, Uttarakhand and Gujarat).
About Delhi
♦ Chief Minister- Arvind Kejriwal
♦ Governor- Anil Baijal

India’s first district cooling system to be built in Amravati
United Arab Emirates (UAE) based international cooling provider,National Central Cooling Company PJSC (Tabreed) entered into a 30-year concession with Andhra Pradesh Capital Region Development Authority (APCRDA) to build India’s first district cooling system in Amaravati,Andhra Pradesh.
i. The agreement is for a contracted cooling capacity of 20,000 Refrigeration Tons (RTs) and will cater to the State’s Assembly, High Court, Secretariat and other Government buildings currently being constructed, for which cooling services will start in early 2021.
ii. The district cooling system will save 40% of the energy currently being used and reduce CO2 emissions, as it uses only 50% of the primary energy consumption for cooling urban buildings, thus, improving the air quality and reducing general noise levels when compared to other traditional air conditioning systems.
About Tabreed
♦ UAE-based district cooling utility company that provides energy-efficient, cost-effective and environmentally friendlier year-round district cooling solutions in the Gulf Cooperation Council (GCC).
♦ The Amravati plant is Tabreed’s first plant outside GCC market.
Related Points
The first district cooling was set up in India at Gujarat International Finance Tec-City (GIFT), the first phase of which has been operational since April 2015, with a capacity of 10,000 RTs.
About UAE
♦ Capital – Abu Dhabi
♦ Currency – UAE Dirham
♦ President – Khalifa bin Zayed Al Nahyan

WHO says Measles cases nearly doubled in 2018
On 16th February 2019, World Health Organization says the number of Measles cases reported in 2018 is nearly double the number of infections contracted, in comparison to previous year.
Key Points
i. The number of Measles cases reported in 2018 was 2,29,068. It was 1,10,000 for 2017 who died from this highly infections diseases. In Europe itself there were 82,596 infections in 2018 as per WHO.
ii. WHO recommended to the Member States to close gaps in vaccination coverage. WHO won’t commit to a compulsory vaccination recommendation although it is working in affected areas.
iii. Measles is a viral infection caused by rubeola virus. It is a highly infectious disease but easily preventable by vaccination.
iv. Vaccination for measles was introduced in 1963.
About World Health Organization
♦ Headquarters – Geneva, Switzerland
♦ Director General- Tedros Adhanom

J P Morgan became First US Bank with Cryptocurrency
On 14th February 2019, JP Morgan rolled out as the first US bank with cryptocurrency. The change in opinion of JP Morgan is the first step in the program of making it more competitive. The currency is designed to be decentralized so that no one has control over transactions being sent over the network. 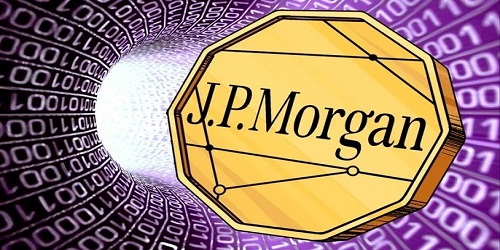 Key Points
i. JP Morgan will be using the cryptocurrency to see its potential in using digital coins to reduce risk and enable instant transfers.
ii. Cryptocurrencies are used successfully to move money between bank and a client which usually runs on a blockchain technology.
iii. JPM Coin is not for retail customers . It will be used internally by the bank to enable instant transfers of payments between institutional accounts.
iv. The bank stressed,all information required by the regulators will be tracked. Only with the approval of regulators and clearing money laundering, clients can use the blockchain network.

FPI investment cap on corporate bonds lifted by RBI
On 15th February 2019, Reserve Bank of India lifted the limit on Corporate bonds. RBI withdrew 20% limit on investment by Foreign Portfolio Investors (FPIs) in corporate bonds of an entity.
Key Points
i. The move will encourage more foreign investors to invest in corporate bonds in the country. It aims at incentivizing FPIs to maintain a portfolio of assets.
ii. In April 2018, it was stipulated that no FPI should have an exposure of more than 20% of its corporate bond portfolio to a single corporate as per the review of the FPI investment in corporate debt.
iii. The directions in this connection have been issued in the Foreign Exchange Management Act (FEMA). It is an Act in India to consolidate and change the laws related to foreign exchange with an objective to facilitate external trade and payments.
iv. FEMA will also promote the orderly development and maintenance of foreign exchange market in India.
About Reserve Bank of India
♦ Headquarter: Mumbai, Maharashtra
♦ Governor: Shaktikanta Das Key Points
i. The MoU will provide an opportunity to clients of both entities to access each other product platforms.
ii. Edelweiss became the first Indian Wealth management company to sign an MoU with offshore private bank (Bank of Singapore).
iii. Bank of Singapore has signed similar MoU with financial companies from Switzerland and Japan.

Government raised Rs.10000 crore from Bharat-22 ETF offering
On 14th February 2019, Government of India gets Rs.10000 crore from Bharat-22 Exchange Traded Fund (ETF) by additional offering. The government has absorbed approximately Rs.46000 crore by way of disinvestment with the successful offering of Bharat-22 ETF.
Key Points
i. The sale of ETF would help the government in achieving the disinvestment target of Rs.80000 crores for the current fiscal. In the current fiscal, it was the second ETF offering made by the government.
ii. The fund house will retain subscriptions worth Rs.13000 crore as it will buy stocks worth Rs.3000 cr from the market. The initial amount in the offer was Rs.3500 cr and additional amount was Rs.9500 cr.
iii. Bharat-22 is an Exchange Traded Fund ( ETF) will closely track the performance of Bharat-22 index. It was launched by Government of India on 14thNovember 2017. ICICI Prudential Mutual Fund AMC will manage the fund.
About ICICI Prudential Mutual Fund
♦ Headquarters -Mumbai,
♦ MD and CEO- Mr. N. S. Kannan

De Goede, Van Doren win 2018 FIH player of the year awards
Eva de Goede from Netherlands and Arthur van Doren of Belgium were titled the International Hockey Federation’s Players of the Year for 2018 on 14th February 2019. 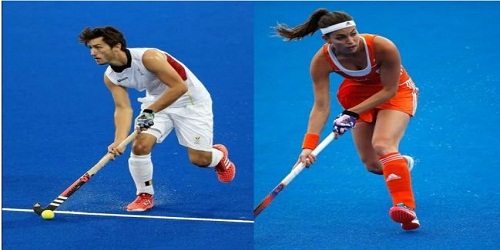 About FIH Player of the year awards
♦ Awarded annually by the International Hockey Federation to the best male and female field hockey in the world.
♦ The awards were established in 1998. 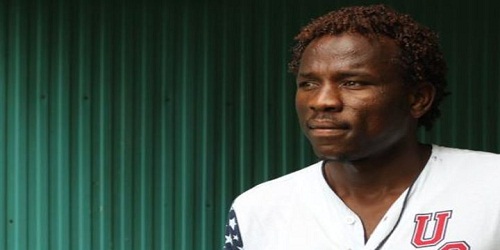 i. He said that his name was stripped off and he was referred to as number- QNK002 and prisoners were fed through a chain-link fence and treated worse than animals.
ii. It was the first time that the prize focused on the plight of refugees and awarded to someone who has suffered violations due to the policies of a Western nation.
Related Points
Abdul Aziz Muhamat’s podcast “The Messenger”, created from more than 4,000 WhatsApp messages Muhamat sent from the detention centre, had won best radio/audio feature at Australia’s Walkley Awards in 2017.
About Martin Ennals Award
The Martin Ennals Award Laureate is selected annually by a jury of 10 of the world’s leading human rights organisations, for demonstrating a deep commitment to human rights, often working under threat of imprisonment, torture, or worse. It is sometimes referred to as the “Nobel Prize for human rights”. i. She was commissioned in the IAF’s engineering branch in 2015 and completed the 6-month Flight Engineer course from the 112 Helicopter Unit attached to the Air Force Station in Yelahanka, Bengaluru.
ii. The Flight Engineer branch was opened to women officers in 2018.
About IAF
♦ Chief – Air Chief Marshal Birender Singh Dhanoa 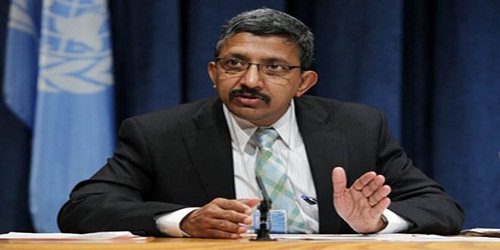 i. Mr. Ramanathan has led high level management initiatives, including implementation of IPSAS(International Public Sector Accounting Standards) and Umoja(the United Nations Enterprise Resource Planning solution).
ii. He has also served as Acting Controller since September 2018, along with his position as Assistant Secretary-General for Enterprise Resource Planning since 2016.  He previously served as Deputy Controller, Director of Accounts Division, and Chief of Service, IT Services Division.
iii. He holds a master’s degree in economics and is a cost accountant.
About United Nations
♦ Headquarters- New York, United States
♦ Secretary General- Antonio Guterres

i. A television campaign was also launched by Kurkure to introduce the new brand positioning ‘Khayal toh chatpata hai’ celebrating the progressive thinking the young Indian homemakers in traditional Indian families and the breaking conventional barriers.
ii. This is the first time that the brand has attempted to include a social message with its product’s marketing.
Related points
♦ Tapsee Pannu is a brand ambassador of 10 brands and has signed five big contracts in 2018, including Uber, Garnier Color Naturals, Melange by Lifestyle, Coverfox and Nivea.

Former Goa Deputy Speaker and writer, Vishnu Wagh, dies aged 53
Eminent writer and former Deputy Speaker of Goa Legislative Assembly, Vishnu Wagh, suffered a heart attack while touring in Cape Town, South Africa. He was 53 years old.
i. He has written over 20 plays in Marathi, 3 sangeet nataks, 18 Konkani plays and 16 one-act plays and directed over 50 plays in Konkani and Marathi.
ii. “Tuka Abhang Abhang”, “Suvari”, “Teen Poishancho Tiatro”, “Dharmashree”, and “Pedru Poddlo Baient” are some of his critically-acclaimed plays.
iii. He was a part of Goa Legislative Assembly from St Andre constituency between 2012 and 2017 and the Chairman of the state-run Goa Kala Academy.

i. It contains the wide experience of the Vice President in Public Affairs.
ii. Mr. Mukherjee and Mr. Naidu also paid homage to the martyrs of Pulwama terror attack and said that the country must stand together to fight against terrorism.