We are here for you to provide the important Current Affairs February 12 2019, which have unique updates of all daily events from all newspapers such as The Hindu, The Economic Times, PIB, Times of India, PTI, Indian Express, Business Standard and all Government official websites. 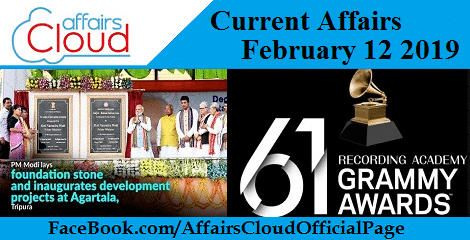 Overview of Prime Minister’s visit to Tripura
On 9th February 2019, Prime Minister, Narendra Modi visited Agartala in the final leg of his a day long tour to Assam, Arunachal Pradesh and Tripura. Various development projects were inaugurated by Narendra Modi in Agartala
PM Modi during his visit to Agartala, Tripura inaugurated various development projects. It was the final destination of a day long tour to 3 North Eastern States.
Key Points
i. Narendra Modi advocated the HIRA (Highway, I way, Railway, Airway) Model of Development for Tripura.
ii. Farmers and labourers in unorganized sector after 60 years of age will get Rs.3000 per month as pension through Pradhan Mantri Shram Yogi Mandhan Pension Yojana.
iii. Farmers who have less than 5 acres of land will get Rs.6000 per annum in their bank account through PM Kisan Samman Nidhi Yojana.
iv. A New Complex of Tripura Institute of Technology, Narsingarh was inaugurated by Narendra Modi.
Garjee- Belonia Railway Line was inaugurated by Prime Minister, Narendra Modi
Modi during his visit to Agartala inaugurated 23 Km long Garjee-Belonia Railway Line. The project was part of the Rs.3407 crore Agartala – Sabroon national railway project which is for 115 km.
Key Points
i. The 23.32 km railway track is in Southern Tripura under Garjee-Belonia section. It would facilitate the carriage of goods and passengers from North-eastern states on the Bangladesh railway network.
ii. The project costs Rs. 400 crores. The train will run at maximum speed of 100km/hr. It is the full – fledged rail connectivity with the rest of India.
Statue of Tripura’s last Maharaja was unveiled by PM
During the visit of PM Modi to Agartala he unveiled the statue of Maharaja Bir Bikram Kishore Manikya at the Maharaja Bir Bikram Airport, Agartala. It was part of the union government policy to honour the heroes of India.
Key Points
i. Maharaja Bir Bikram Kishore Manikya is considered as father of modern architecture in Tripura. He did the entire planning of present-day Tripura during his rule. He planned the capital city Agartala also.
ii. Statue was built by faculty and students of Tripura government’s Art and craft college. It costs Rs.5 lakh for the Maharaja Bir Bikram Kishore Manikya statue.
About Tripura
♦ Capital: Agartala
♦ Chief Minister: Biplal Kumar Deb
♦ Governor: Kaptan Singh Solanki

Overview of Prime Minister Narendra Modi Visit to Assam
Narendra Modi has visited Assam to attend the several programs and to lay the foundation stone of several vital and development projects worth Rs. 18,000 crore. 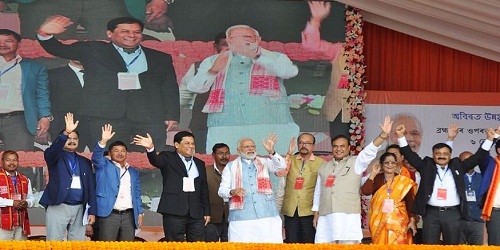 PMKVY Short Term Training has trained 25.25 Lakh Candidates
25.25 lakh candidates,out of the 37.32 lakh (aprrox.), have been trained under the Short-Term Training (STT) of the Pradhan Mantri Kaushal Vikas Yojna (PMKVY). Similarly, 11.27 lakhunder Recognition of Prior Learning (RPL) and 0.8 lakh under Special Project in various sectors across India.
i. ‘Skill Loan Mission’ has been launched by the Government to support youth by providing loan facility to individuals who wish to enroll for the skill development courses, as per the Skill Loan eligibility criteria.
ii. All the member banks of the Indian Banking Association (IBA) and other banking and financial institutions, including Micro Finance Institutions, regulated by the Reserve bank of India (RBI) are applicable for the Skill Loan Scheme.
iii. The Ministry of Skill Development & Entrepreneurship’s lead bank, ‘Bank of India’ is the first bank to notify and implement the scheme.
iv. Loans are available in the range of Rs 5000 to Rs 15,000.
v. In the financial year 2017-18, total amount of Rs 29.06 crore was disbursed against 3551 accounts, and during 2018-19 (till Dec 18), Rs 19.46 crore against 2429 accounts.
About PMKVY
Flagship scheme of the Ministry of Skill Development & Entrepreneurship (MSDE), aimed at enabling a large number of Indian Youth to take up industry-relevant skill training to help them secure a better livelihood.

India gets its 4 Chinook heavy lift helicopters from US
On the lines of Indo-US $2.5 billion deal in 2015, stating the purchase of 22 Apaches and 15 Chinook helicopters for IAF, India received a batch of first four, Boeing Co’s, CH-47F Chinook military helicopters, from US which arrived at the Mundra Port in Gujarat.
Key Points
i. These are modern heavy lift choppers which have a primary purpose to move troops, artillery, barrier materials, and equipment on the battlefield. Its tandem configuration also provides exceptional handling qualities like to operate in climatic, altitude, and crosswind conditions.
ii. These helicopters have been used by the US Army since 1962 and were also availed in Vietnam.
iii. These Chinooks will be conveyed to Chandigarh later this year, where they will be formally admitted into the Indian Air Force.
iv.They will replace the Russia-made Mi-17 medium-lift helicopters, the Mi-26 helicopters and Mi-35 attack helicopters.
United States of America
♦ Capital- Washington, D. C.,
♦ Currency- US Dollar
♦ President- Donald Trump 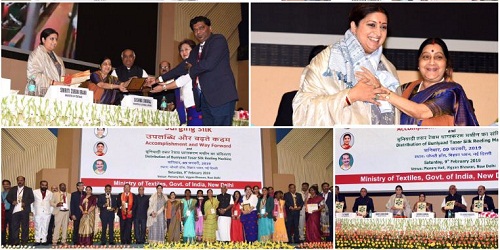 About the event
i. The event was organized with a motive to highlight the growth of silk industry in India.
ii. In this event, Buniyaad Tasar Silk Reeling Machines distributed to women reelers from tribal areas, to eradicate  the age old practice of thigh reeling by end of March 2020.
iii. These machines developed by Central Silk Technological Research Institute in association with an entrepreneur from Champa in Chhattisgarh will improve the quality and productivity of Tasar silk yarn.
iv. A mobile application e-cocoon was launched during this event to check the quality of  silkworm seeds.
Static Gk:
India is the second largest producer of silk after China and the largest consumer of silk.

Festival of Basant Panchami was celebrated all over the nation
Vasant Panchami is a Hindu festival which highlights the coming of spring. About the festival
i. According to the Gregorian calendar, it is celebrated between the months of January and February all over the nation.
ii. The celebration of the Basant Panchami is centered on the goddess of wisdom, Sarasvati.

A 3-day Krishi Kumbh Mela held in Bihar
Union Agriculture Minister Radha Mohan Singh along with Bihar Governor Lalji Tandon inaugurated the 3-day long Krishi Kumbh Mela in Motihari, Bihar.
i. The main objective of the event is promoting modern techniques and diversification in agriculture to help in doubling farmer’s income.
ii. According to the Shri Radha Mohan Singh, the government aims to double the income of farmers by 2022 and it is also creating a strong infrastructure from ‘Beej to Bazar’ for enhancing the farmer’s income
iii. Government is creating strong infrastructure from “Beej to Bazar” for enhancing the farmer’s income.
iv. The Union Agriculture Minister, with the support of state Chief Ministers, is set to the implement the Pradhan Mantri Kisan Samman Nidhi (PM-KISAN) program in an efficient manner to ensure expeditious transfer of benefits to farmers
About PM-KISAN Scheme
Centrally sponsored scheme under which an income support of Rs 6000/- per year (in 3 instalments) will be provided to small and marginal farmer families having combined land holding/ownership of up to 2 hectares
About Bihar
♦ Chief Minister – Nitish Kumar
♦ Governor – Lalji Tandon

RBI MSME package to help recast 1 lakh crore loan for 700k accounts
On February 11,2019,RBI restructuring package for small businesses will help recast Rs 1 lakh crore of loans to 7 lakh MSME s account holders.
About the scheme
i. This scheme must be implemented by every bank before March 2020.
ii. This MSME package would enhance job opportunities in the industry.
iii. This scheme announced by RBI is a one-time scheme wherein a loan tenor and interest rate can be revised without classifying the asset as an NPA.
iv. The facility is available for standard advances of up to Rs 25 crore .

i. Mr. El Sisi would succeed Rwanda’s President Paul Kagame,who served for a period of 1 year.
ii. The Egyptian President said that the objective would be to improve peace and security in Africa in a holistic and sustainable manner, by keeping mediation and preventive diplomacy as the priority.
Related News
♦ A statue of Ethiopia’s last emperor, Haile Selassie, was unveiled at the African Union’s meeting.
About Ethiopia
♦ Capital – Addis Ababa
♦ Currency – Birr
♦ Prime Minister – Abiy Ahmed Jamie Chadwick becomes the first female driver to win MRF Challenge title in Chennai
The 20 years old,Jamie Chadwick from Bath, England made history by becoming the first female driver to win the MRF challenge title after winning 3 out of 5 races in the final round in Chennai.
i. She has defeated Max Defourny of Belgium.
ii. She won 6 out of 15 races in the series which had started in November and included events in Dubai and Bahrain.
Related News
Chadwick won the British F3 race and became the first woman to win this title in August 2018. 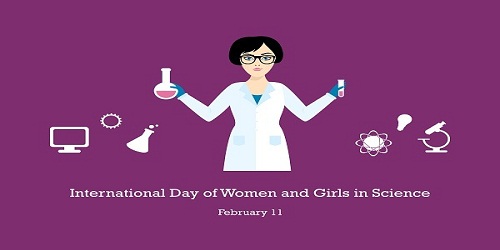 i. As per the UNESCO data (2014-16), only about 30% of all female students select STEM-related fields in higher education
ii. Globally, the enrolment of female students is particularly low in ICT (3%), Natural Science, Mathematics and Statistics (5%) and in in Engineering, manufacturing and construction (8%)
iii. The theme for the International Day of Women and Girls in Science 2019 was “Investment in Women and Girls in Science for Inclusive Green Growth.