We are here for you to provide the important Recent and Latest Current Affairs 9 October 2020, which have unique updates of Latest Current Affairs 2020 events from all newspapers such as The Hindu, The Economic Times, PIB, Times of India, PTI, Indian Express, Business Standard and all Government official websites. 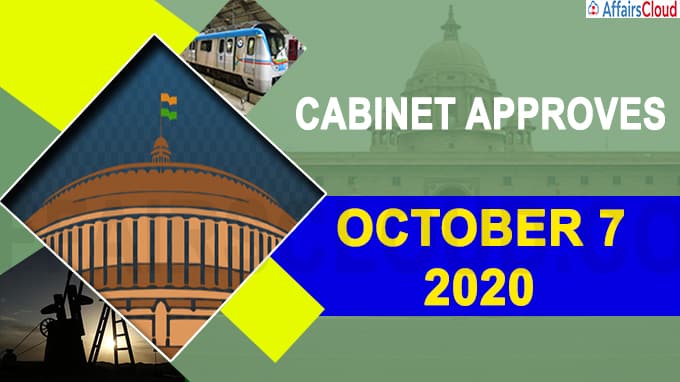 i.On October 7, 2020, Union Cabinet met and congratulated its chair i.e. Prime Minister Narendra Modi for completing 20 years as a democratically elected leader. He previously served as Chief Minister of Gujarat for three consecutive terms.
ii.During the meet, the Union Cabinet provided approvals to the following proposals which were elaborated by Union Minister Prakash Kehav Javadekar during a media briefing. 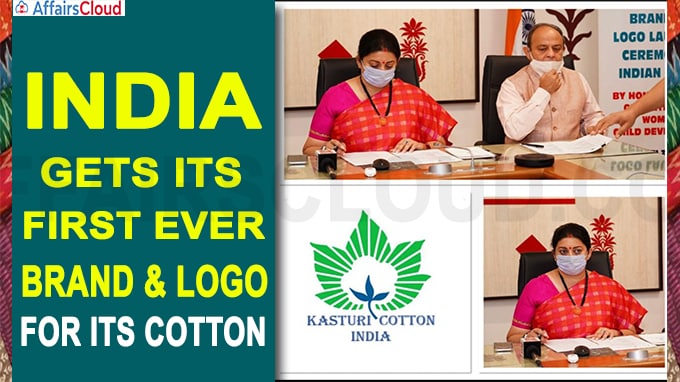 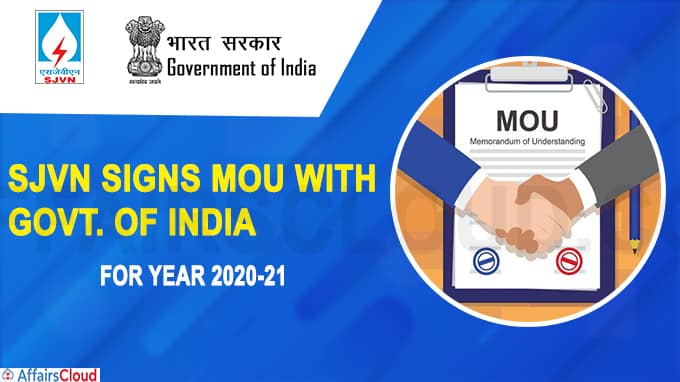 i.SJVN Limited signed a Memorandum of Understanding (MoU) with Govt. of India (GoI)for the year 2020-21 as per which the former has the target to achieve 9680 Million Units of electricity generation during FY21 under “Excellent” category.
ii.The MOU was signed by Sanjiv Nandan Sahai, Secretary (Power), Government of India and Nand Lal Sharma, Chairman & Managing Director (CMD), SJVN.
iii.It should be noted that SJVN has set a target of achieving installed capacity of 5000 MW (Mega Watt) by 2023, 12000 MW by 2030 and 25000 MW by 2040.
About SJVN:
Based in Shimla, Himachal Pradesh (HP), it is a Mini Ratna, Category-I and Schedule –‘A’ CPSE under administrative control of Ministry of Power. It is a joint venture (JV) GoI and Government of Himachal Pradesh (GOHP).
About Ministry of Power:
Minister of State (Independent Charge)– Raj Kumar Singh
<<Read Full News>> On October 6, 2020, Union Minister for Health & Family Welfare, Harsh Vardhan, and Minister of State (MoS) (Independent Charge) for AYUSH (Ayurveda, Yoga & Naturopathy, Unani, Siddha), Shripad Yesso Naik virtually released the National Clinical Management Protocol (NCMP) based on Ayurveda and Yoga for management of COVID-19.
The protocol will contribute to mainstreaming of AYUSH for management of COVID-19.
Key Points:
i.An Interdisciplinary Committee Chaired by Dr V M Katoch, former Director General of Indian Council of Medical Research (ICMR) and team of experts formulated the report and submitted recommendations to the National Task Force based on acceptable experimental and clinical data.
ii.NCMP will be beneficial to the public as AYUSH solutions will be easily accessible and it will end the confusion for the deployment of Ayurveda and Yoga-based solutions for clinical management of COVID-19.
iii.The next versions of the protocol will include other disciplines of AYUSH.
iv.NCMP promotes the use of ashwagandha, guduchi, pippali, AYUSH 64 tablets, and yoga to prevent COVID, treating mild symptoms and for post-COVID care. 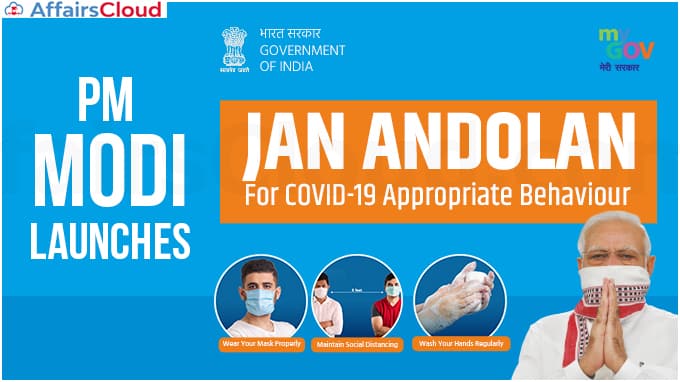 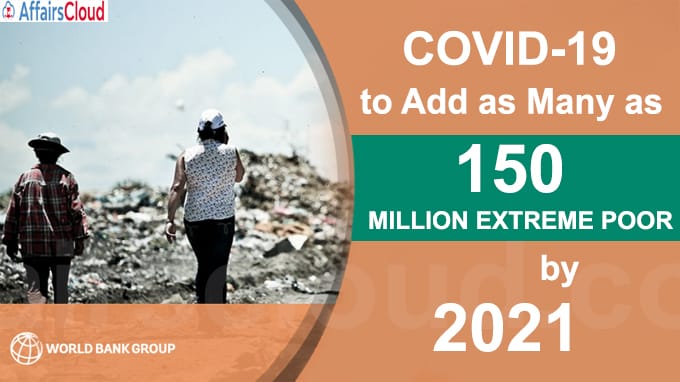 According to the Biennial report ‘Poverty and Shared Prosperity 2020: Reversals of Fortune’ released by the World Bank Group around 150 Million People will be pushed into Extreme Poverty by the end of 2021 due to COVID-19. This is the first rise in Extreme Poverty Percentage in 20 years.
The report analyzes three aspects which are driving the increase in global poverty – COVID-19, Armed Conflict and Climate Change.
Key Points:
i.The pandemic is expected to push 88 Million-115 Million people into extreme poverty in 2020.
ii.According to the report, Sub-Saharan Africa with 27-40 Million new poor and South Asia with 49-57 Million will be the worst affected regions.
iii.Middle-income countries are set to see a significant number of people slipping to extreme poverty. Around 82 % will be in middle-income countries.
iv.In order to reduce poverty, countries will need to control the virus, provide support for households and build strong economies.
Lack of Data in India:
i.The World Bank highlighted the lack of data in India as a hindrance for monitoring Global Poverty.
ii.Government of India has not released 2017-18 All India Household Consumer Expenditure Survey Data due to which there is lack of data.
iii.As a result, the World Bank has estimated India’s poverty numbers for 2017 based on assumptions, creating uncertainty around the estimates of global poverty.
About World Bank Group:
President – David R. Malpass
Headquarters – Washington D.C. (United States of America) 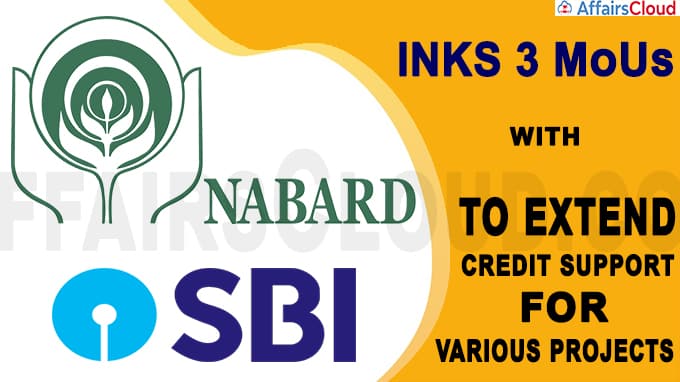 On October 7, 2020, in Ahemdabad, Gujarat, the National Bank for Agriculture and Rural Development (NABARD) has inked three Memoranda of Understanding (MoU) with State Bank of India (SBI) to  extend credit support for various NABARD projects.

As a part of MoU, joint liability groups, Farmer Producers’ Organizations (FPOs) and Self-Help Groups (SHGs) will be supported through financing, and economic support also provided for watershed development projects. These will help in providing credit support to the different sections of the society including the priority sector.
About State Bank of India:
Chairman– Dinesh Kumar Khara
Headquarter– Mumbai, Maharashtra
Digital Assistant– Ask Sia 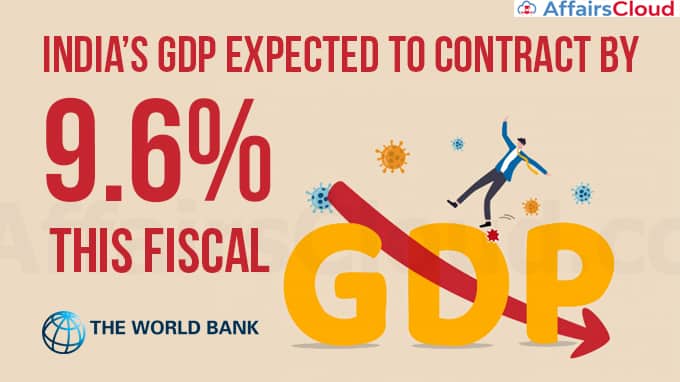 i.As per World Bank’s latest South Asia Economic Focus forecasts, India’s Gross Domestic Product(GDP) is expected to contract by 9.6%(-9.6%) in FY21. This prediction reflects the national lockdown and the income shock experienced by households and firms due to the COVID-19 pandemic.
ii.On the other hand it expects a 5.4% rebound in FY22.
iii.Regional growth(South Asia) is expected to contract by 7.7% in 2020, after topping 6% annually in the past five years, and rebound to 4.5% in 2021.
About World Bank:
HeadQuarters– Washington, DC, United States
President– David Robert(R.) Malpass
<<Read Full News>> 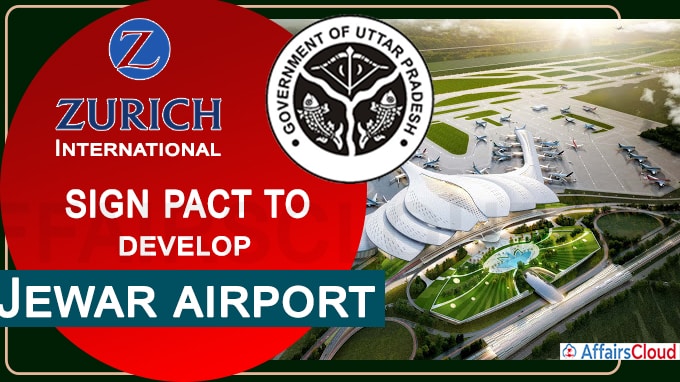 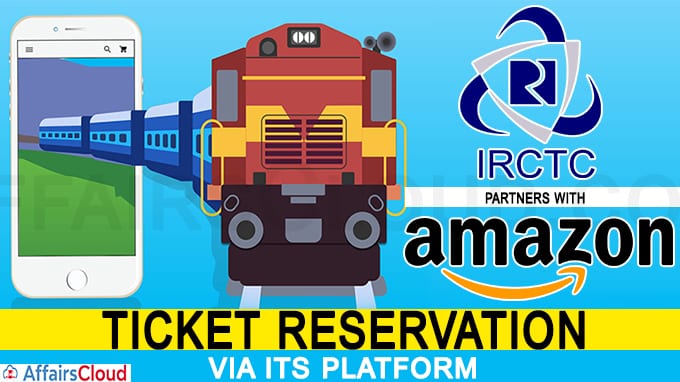 On October 8, 2020 Reserve Bank of India(RBI) extended the term of  Rajesh Kumar(R.K.) Chhibber as Chairman and Managing Director(CMD) of Jammu & Kashmir(J&K) Bank for another 6 months, effective from October 10, 2020 or till the appointment of Managing Director(MD) and Chief Executive Officer(CEO), whichever is earlier.

Key Info
i.R.K. Chhibber(Non-Independent Executive Director) was appointed as interim CMD in June 2019, following the removal of Parvez Ahmed from the post by the state government.
ii.He has been serving as a full-time CMD under section 10BB of the Banking Regulation Act, 1949, since October 10, 2019, before which he got a few extensions as the interim CMD.
iii.His term was earlier extended in April 2020.
About R.K. Chhibber

i.On 6th October 2020, at the emergency session of the Parliament of Kyrgyzstan (also known as Jogorku Kenesh) appointed Sadyr Zhaparov, as the Acting Prime Minister(PM) of Kyrgyzstan. He was appointed following the resignation of the former PM Kubatbek Boronov amid post-election vote rigging protests.
ii.The parliament nominated Sadyr Zhaparov as the prime minister after he was released from the prison following the protest.
About Kyrgyzstan:
President– Sooronbay Jeenbekov
Capital– Bishkek
Currency– Kyrgyzstani Som
<<Read Full News>> 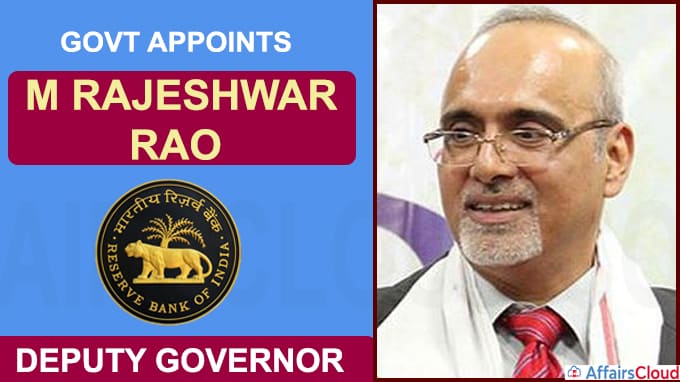 On 7th October 2020, the Government of India appointed M Rajeshwar Rao as the new 4th deputy governor of the Reserve Bank of India(RBI) responsible for Financial regulations. He will succeed NS Vishwanathan, the former 4th Deputy Governor of RBI, who resigned in March 2020 before the completion of his term (June 2020).M Rajeshwar Rao is currently serving as the executive director of RBI.
About M Rajeshwar Rao:
i.M Rajeshwar Rao joined the RBI in 1984.
ii.He was appointed as the executive director responsible for the department of the Statistics and information management, financial markets operation department and international department in November 2016.
iii.He served as the chief general manager in the financial market operations department.
iv.He also served as the Banking Ombudsman in New Delhi and in RBI Regional Offices in Ahmedabad, Hyderabad, Chennai and New Delhi.
Note:
According to the RBI Act, 1934, RBI is required to have 4 deputy governors, 2 from within the ranks, 1 commercial banker and 1 economist to head the monetary policy department.
The other 3 deputy governors of RBI are Bibhu Prasad Kanungo, Mahesh Kumar Jain and Micheal Debabrata Patra.
About Reserve Bank of India(RBI):
Governor– Shaktikanta Das
Headquarters- Mumbai, Maharashtra 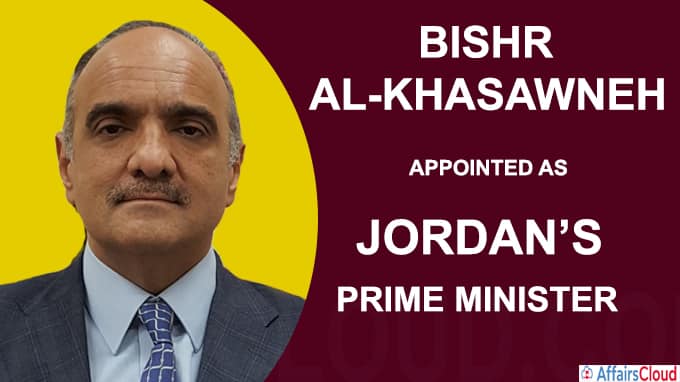 Mario Molina, The Only Mexican Scientist to Win Nobel Prize in Chemistry Passed Away at 77 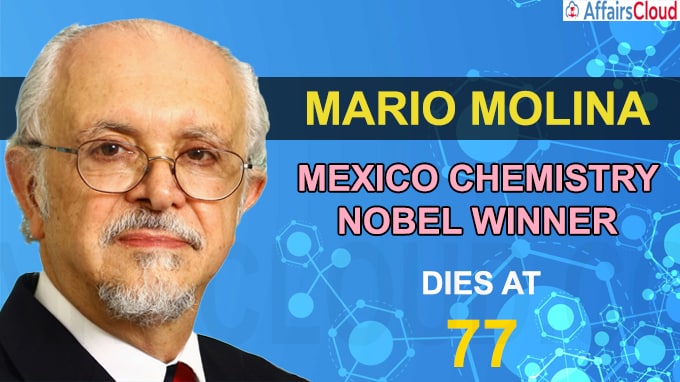 On 7th October 2020, Mario José Molina, the only Mexican scientist to receive the Nobel Prize, passed away at the age of 77 in his native Mexico City, Mexico. He shared the 1995 Nobel Prize in Chemistry with Frank Sherwood Rowland of the United States(US) and Paul Crutzen of the Netherlands for their 1970 research on the damage to Ozone layer. He was born on 19th March 1943 in Mexico City, Mexico.
About Mario J. Molina:
i.Mario was well known for his role in the discovery of the Antarctic Ozone hole.
ii.He discovered the effects of chlorofluorocarbon gases or CFCs on the depletion of the Ozone layer.
iii.This work contributed to the drafting of the first International treaty regarding the depletion of Ozone, the Montreal Protocol, which stopped the use of these substances.
iv.Mario Molina devised the CFC ozone depletion theory together with Rowland.
v.He established his own program to investigate the spectroscopic and chemical properties of various compounds and their role in the atmosphere.
Awards:
i.He won the American Chemical Society’s Esselen Award of the Northeast section in 1987.
ii.He won the United Nations(UN) Environmental Programme Global 500 Award in 1989.
iii.He received the Presidential Medal of Freedom from Former American President Barack Obama on 8th August 2013. 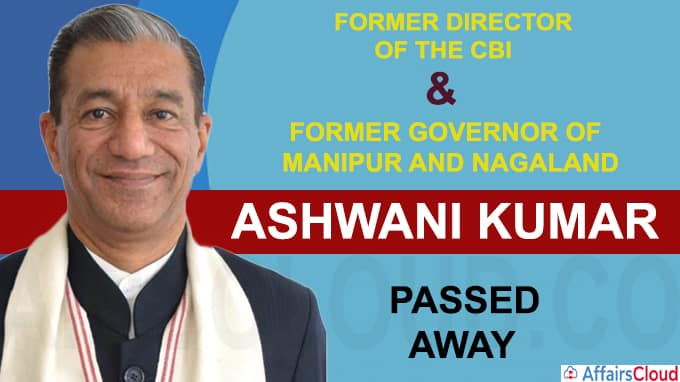 On 7th October 2020, 69 years old Ashwani Kumar, the former Director of Central Bureau of Investigation (CBI) and former governor of Manipur and Nagaland committed suicide and was found dead in his residence in Shimla. He was born on 15th November 1950 in Nahan, Sirmaur, Himachal Pradesh.
He was currently serving as the vice chancellor of a Private university in Shimla.
About Ashwani Kumar:
i.Ashwani Kumar was a retired IPS officer of 1973 batch from the Himachal Pradesh Cadre.
ii.He was selected and inducted in the Special Protection Group (SPG), responsible for the security of the Prime Minister in 1985.
iii.He served as the Director General of Police (DGP) of Himachal Pradesh from 2006 to 2008.
iv.He was appointed as the Director of CBI for a period of 2 years (August 2008 to November 2010) and became the first officer from Himachal Pradesh to head CBI.
v.He served as the 17th governor of Nagaland from 2013 to 2014 during which he also served as the governor of Manipur in 2013. 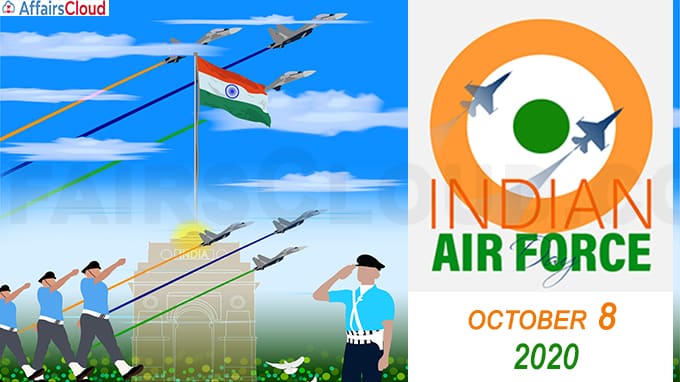 i.The Indian Air Force (IAF) day is held annually on October 8 as on this date the Air Force in India was officially raised in 1932 as the supporting force of the Royal Air Force of the United Kingdom (UK).
ii.The year 2020 marked its 88th anniversary.
iii.The day was marked by the main event comprising a parade and flypast at Hindon Air Force Base in Ghaziabad, Uttar Pradesh (UP) with COVID restrictions along with events at IAF establishments across the country.
iv.Notably, this year, the Tejas LCA, Mig-29 and 21 and Sukhoi-30 participated in show along with newly inducted Rafale jets, marking Rafale’s first public appearance since arrival in Indian.
About Indian Air Force (IAF):
Chief of Air staff (CAS)– Rakesh Kumar Singh Badhauria
Headquarter– New Delhi
<<Read Full News>> i.World Sight Day is observed annually on the second Thursday of October, this year(2020) it falls on October 8. The day aims to create awareness globally about blindness and vision impairment. Theme of World Sight Day 2020– ‘Hope In Sight’.
ii.The Right to Sight was launched in 1999 by the World Health Organization and the International Agency for the Prevention of Blindness.Globally, IAPB has a leadership role in  preparing the annual World Sight Day.
About International Agency for the Prevention of Blindness (IAPB):
Chief Executive Officer– Peter Holland
HeadQuarters– London, United kingdom
<<Read Full News>> 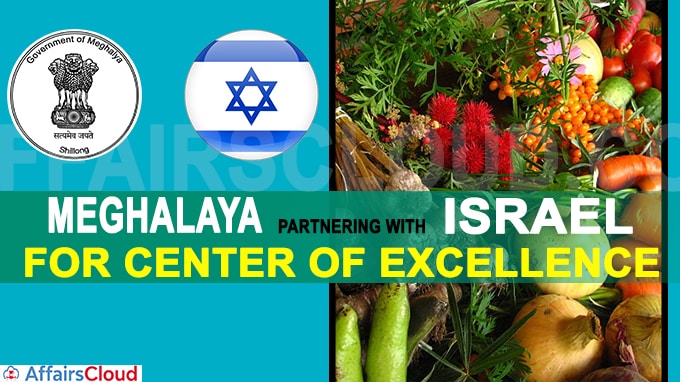 i.On October 7, 2020 In order to improve and promote the livelihoods of farmers, the Meghalaya government entered into partnership with Israel to establish a  one of a kind
Centre of Excellence(CoE) on high value vegetables in the state.
ii.CoE is important for tapping the diverse biodiversity and available resources in the state in terms of its soil and agro-climatic condition.
About Meghalaya:
Chief Minister– Conrad K Sangma
National Park– Balphakram National Park, Nokrek National Park
<<Read Full News>>