We are here for you to provide the important Recent and Latest Current Affairs 30 September 2020, which have unique updates of Latest Current Affairs 2020 events from all newspapers such as The Hindu, The Economic Times, PIB, Times of India, PTI, Indian Express, Business Standard and all Government official websites. 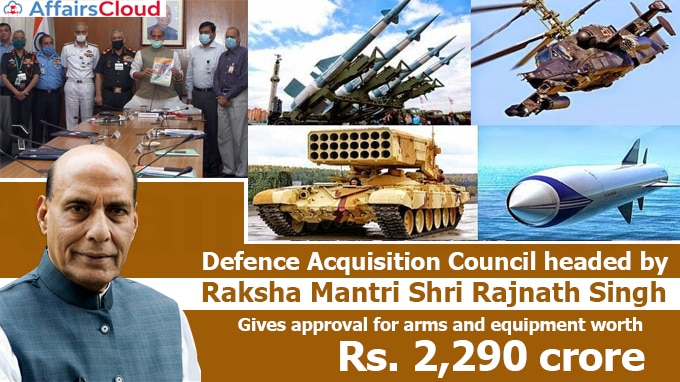 i.After the release of New Draft Defence Procurement Procedure 2020 in March 2020 (Read Here), the final form of DAP 2020, a renamed version of Defence Procurement Procedure (DPP), was unveiled by Defence Minister Rajnath Singh which has been prepared on the lines of Atmanirbhar Bharat to empower domestic industry with the ultimate aim of turning India into a global manufacturing hub. It will be applicable with effect from October 1, 2020 for a period of five years i.e. till 2025.
ii.During the meeting, DAC approved the procurement of Static HF Tans-receiver sets and Smart Anti Airfield Weapon (SAAW) under the Buy Indian [IDDM (Indigenously Designed, Developed and Manufactured)] category.
iii.Apart from above, DAC also accorded approval for procurement of SIG SAUER Assault Rifles at a cost of approx. Rs.780 crore to equip the Frontline Troops of the Army.
About Ministry of Defence:
Rajnath Singh constituency– Lucknow, Uttar Pradesh (UP)
Minister of State (MoS)– Shripad Yesso Naik
<<Read Full News>> 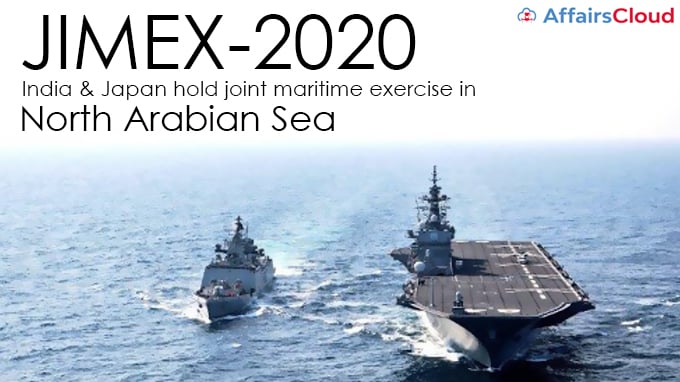 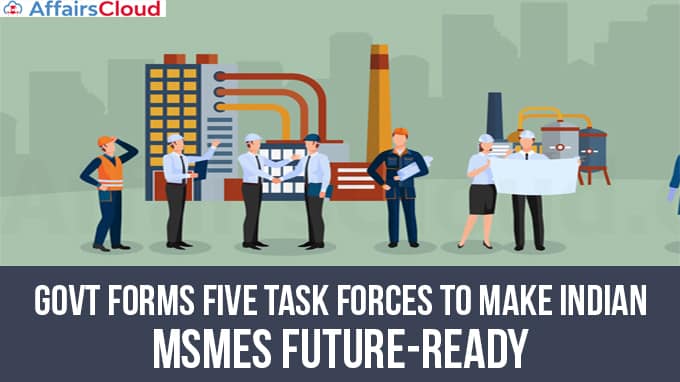 i.On September 28, 2020, a Virtual Bilateral Summit was held between Indian Prime Minister Narendra Modi and Prime Minister of Denmark Mette Frederiksen which was hosted by India to strengthen the bilateral relations between the two countries. The summit saw the conversations of the same opinions and a signing of a Memorandum of Understanding (MoU) in the field of intellectual property (IP) cooperation.
ii.It should be noted that PM Modi proposed the creation of India-Denmark Green Energy Park to help Danish companies active in India along with India-Denmark Skill Institute to help Danish companies operating in India to select the people they require from the local skilled population.
iii.On the other hand, Denmark has proposed to host the second ‘Knowledge Summit’ and if the situation normalizes.
About Denmark:
Capital– Copenhagen
Currency– Danish krone
<<Read Full News>> 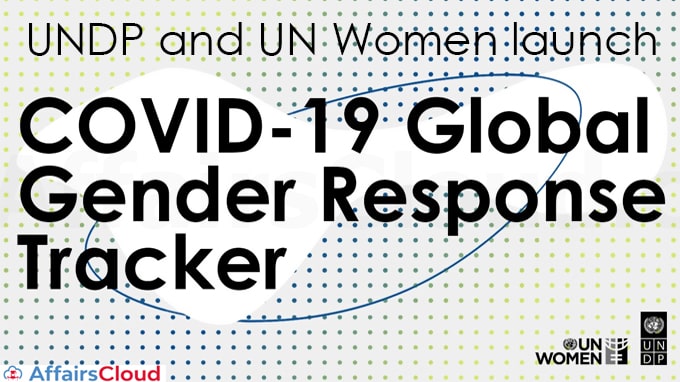 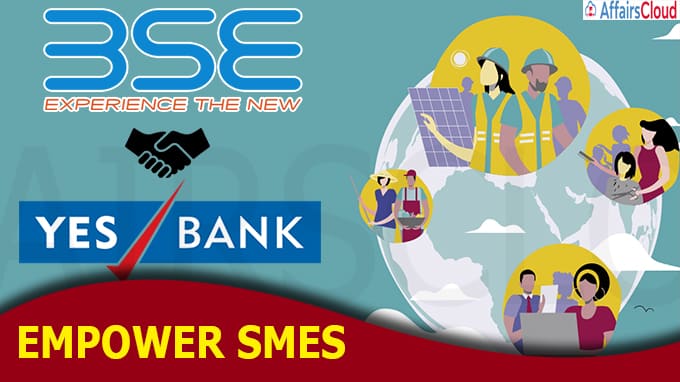 i.On September 28, 2020, BSE (formerly Bombay Stock Exchange) had signed an Memorandum of Understanding (MoU) with Yes Bank in order to empower the Small and Medium Enterprises (SMEs) that are listed on the BSE through awareness and knowledge-sharing programmes.
ii.BSE and YES bank through this partnership aims to make SMEs more competitive and to fast-track their growth through solutions that address their business challenges.
About BSE (formerly Bombay Stock Exchange):
Managing Director(MD) and Chief Executive Officer(CEO)– Ashishkumar Chauhan
Head Office– Mumbai, Maharashtra.
<<Read Full News>> 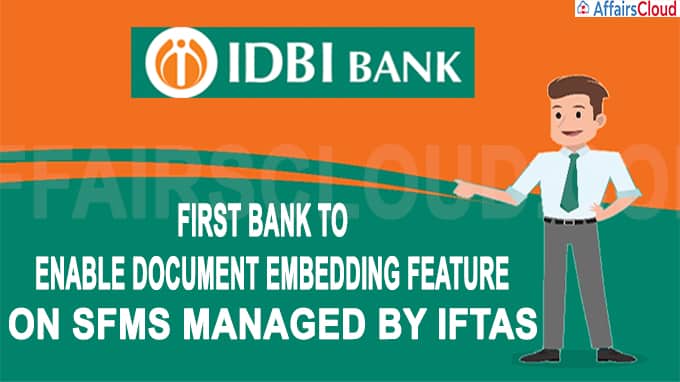 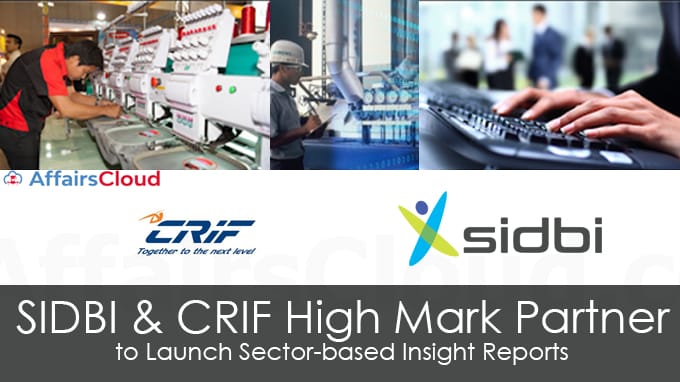 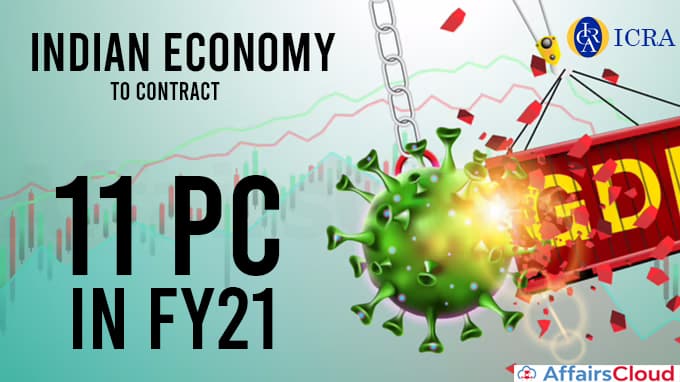 On September 28, 2020, Domestic rating agency ICRA (formerly Investment Information and Credit Rating Agency) further downgraded India’s Gross Domestic Product (GDP) estimate with a contraction of 11% in FY2020-2021 in comparison to the earlier contraction of 9.5%. This revision is due to the continuous elevation in new COVID-19 cases. 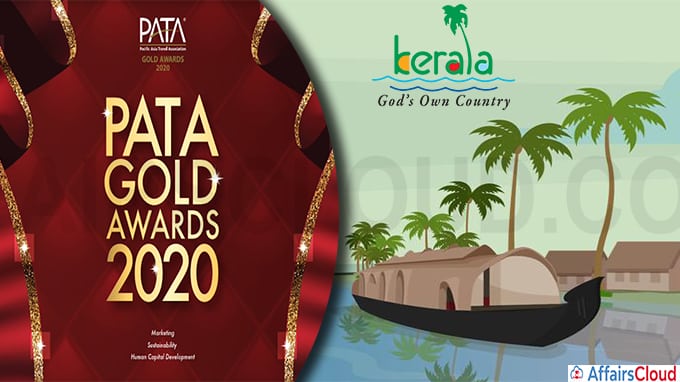 On September 24, 2020 Kerala Tourism’s ‘Human by Nature Print Campaign’ campaign bagged the Prestigious Pacific Asia Travel Association (PATA) Grand Title Winner 2020 for Marketing.
i.The awards were announced during a presentation ceremony of Virtual PATA Travel Mart 2020 in Beijing, which took place from September 23-27, 2020.
ii.The PATA Awards are supported and sponsored by Macao Government Tourist Office (MGTO) for the last 25 years.
Karnataka Tourism Bags PATA Gold Award 2020:
Department of Tourism, Government of Karnataka won the PATA Gold Award 2020 for its Marketing Campaign – ‘Script your Adventure 2019’. It was one of the 21 Gold Award winners from across the globe.
PATA Grand Title Winners 2020: 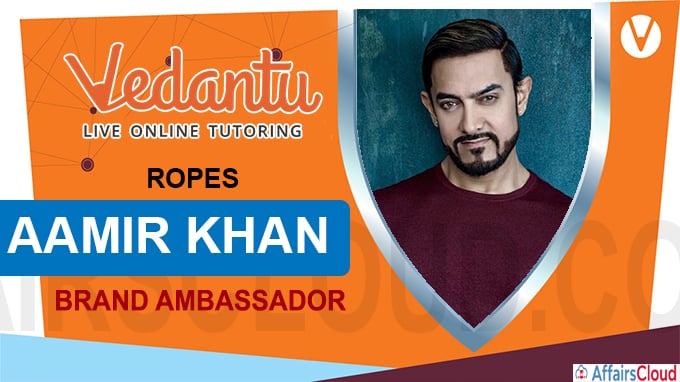 On September 28, 2020 Vedantu, Online live tutoring company roped in Indian Actor Aamir Khan(Mohammed Aamir Hussain Khan) as its Brand Ambassador. He will feature in the new ad-campaigns of the company. The 6 ad film series are conceptualized by The Script Room with the tagline “Samaj Aayega toh Maza Ayega, Maza Ayega toh Samajh Ayega”.
Key Info
i.The duration of the films ranges from 20- 50 seconds. This will be released on television across 46 channels, digital & OTT platforms.
ii.Vedantu with its new ad campaign aims to make quality online live learning that is accessible to every child, every home with India’s best curated teachers.
Note– He recently became the brand ambassador of CEAT Limited(CEAT), a tyre company of RPG Enterprises(Rama Prasad Goenka Group) for 2 years.
About Aamir Khan
i.Apart from being an actor he is a director, filmmaker and television talk-show host.
ii.He appeared on screen as a child actor in the film Yaadon Ki Baaraat (1973).
iii.He is the recipient of many awards including Padma Shri(2003) and  Padma Bhushan(2010).
Other Celebrities who Became Brand Ambassador of an edutech company 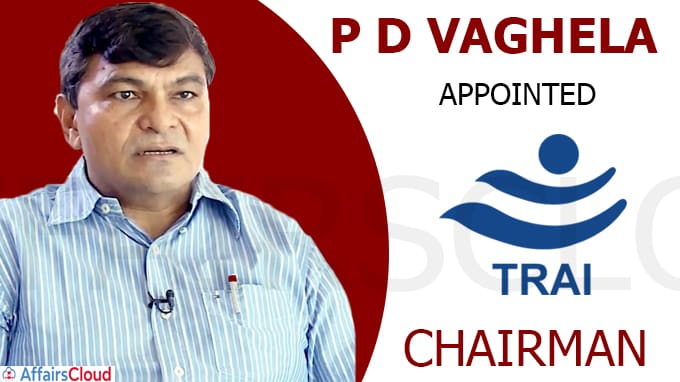 On September 28, 2020 The Appointments Committee of the Cabinet (ACC) appointed P.D. Vaghela, currently the secretary of the department of pharmaceuticals (DoP) under the Ministry of Chemicals and Fertilizers as the chairman of the Telecom Regulatory Authority of India (TRAI) for a period of three years or until he attains the age of 65, whichever is earlier. He will succeed Ram Sewak(RS) Sharma, who will retire on September 30, 2020, after a five-year tenure.

About P.D. Vaghela
i.He is a 1986-batch IAS officer of Gujarat cadre.
ii.Prior to serving as a Secretary of DoP he was the Commissioner of Commercial tax in Gujarat .
iii.He is one of the key officials to roll out of Goods and Services Tax (GST) in 2017.
About R S Sharma
i.During 2009-2013, he led the creation of Aadhaar as the director general and mission director of the Unique Identification Authority of India (UIDAI).
ii.He was instrumental in the adoption of net neutrality in India and also introduced a new framework for broadcasting and cable services.
About Telecom Regulatory Authority of India (TRAI):
It was established by an Act of Parliament, the Telecom Regulatory Authority of India Act, 1997, to regulate telecom services with effect from 20th February 1997.
HeadOffice– New Delhi, India 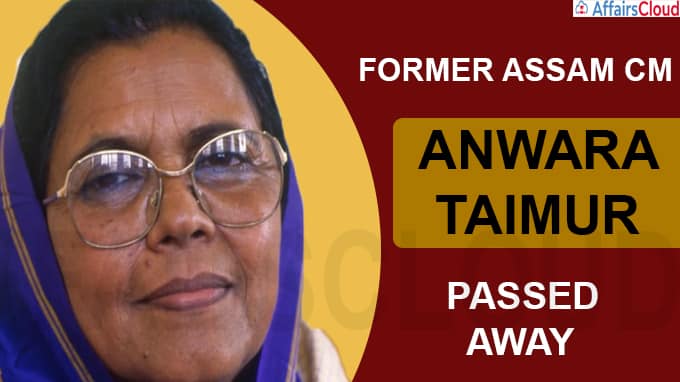 On September 28, 2020 Syeda Anwara Taimur, Assam’s first and only woman Chief Minister(CM) passed away in Australia due to cardiac arrest. She was around the age of 83. She is the 1st Muslim woman CM of any state in India. She was born on November 24, 1936 in Assam, British India.

Key Info About Syeda Anwara Taimur
i.Syeda Anwara Taimur prior to entering into politics served as the Economics lecturer in  Devicharan Barua Girls College at Jorhat in 1956.
ii.She was the CM of the state from December 1980 to June 1981 as a member of the Congress during the height of the anti-foreigners’ agitation in the State. Her tenure ended as the state was put under president’s rule.
iii.She was a leader of the Indian National Congress party in Assam and a member of the All India Congress Committee (AICC).
iv.She served as the Public Works Department(PWD) and agriculture minister of the state from 1983 to 1985. She joined the All India United Democratic Front (AIUDF) in 2011. On September 26, 2020 Defence Minister Rajnath Singh Launched the Book ‘A Bouquet of Flowers’ written by Dr Krishna Saksena. She is the first woman to get a PhD (Doctor of Philosophy).
i.The 92-year old retired English Professor got her PhD from Lucknow, Uttar Pradesh in the year 1955.
ii.This is her ninth book, and it gives a look into the inner workings of society, from the perspective of changing values and culture, where she subtly highlights the strengths and weaknesses of Contemporary Society.
iii.The book is a series of tales, which allows the readers to extract morals of the stories rather than imposing her views on them.

First Ever “International Day of Awareness of Food Loss and Waste” observed on 29th September, 2020 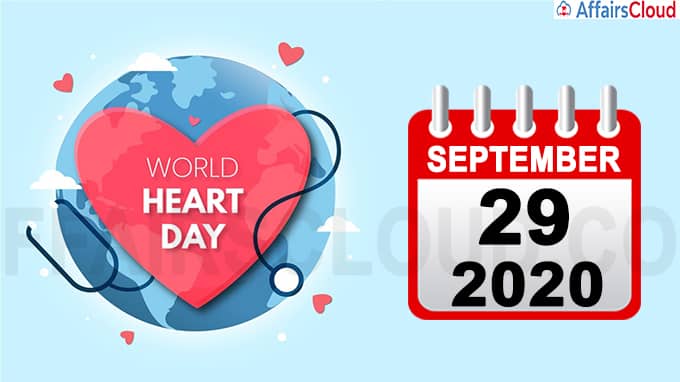 i.World Heart Day is observed annually on September 29 to raise awareness about Cardiovascular diseases (CVDs) including heart disease & stroke and highlights their prevention and global impact.
ii.The day also aims to educate people that at least 80% of premature deaths due to heart disease and stroke can be avoided by controlling risk factors such as tobacco use, unhealthy diet and physical inactivity.
iii.The World Health Day was established in 1999 by the World Heart Federation (WHF) in collaboration with the World Health Organisation (WHO).
About World Heart Federation (WHF)
HeadQuarters– Geneva, Switzerland
President of the Board– Prof Karen Sliwa
<<Read Full News>> 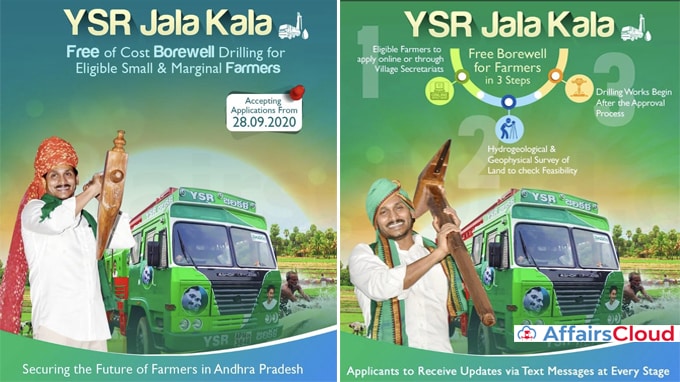 On September 28, 2020 Andhra Pradesh (AP) Chief Minister Y. S. Jaganmohan Reddy launched YSR Jala Kala Scheme for small and marginal Farmers. Under the scheme, the State Government will drill borewells in arid, and uplands in the state with an expenditure of Rs. 2, 340 Crore over a period of four-years.
Borewells will be drilled free of cost for needy farmers, the state government will also provide free motors to small and marginal farmers.
The Scheme is being introduced to benefit upland farmers, who are dependent on Rains.
About Andhra Pradesh:
Ports – Visakhapatnam Port, Krishnapatnam Port
River – Gautami Godavari, Godavari, Krishna River, Palar, Pennar, Tungabhadra
<<Read Full News>> 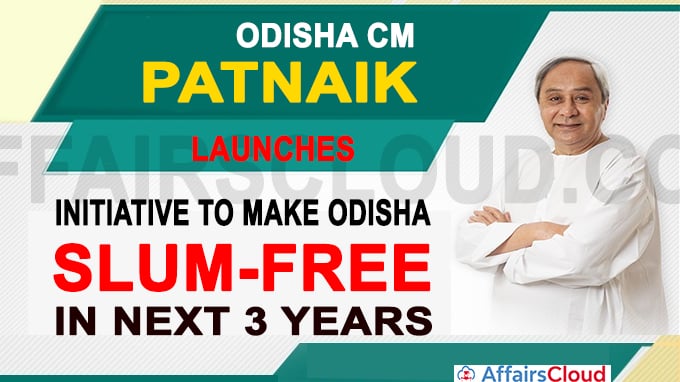 i.On September 28, 2020, the Chief Minister (CM) of Odisha Naveen Patnaik launched the stage II of JAGA Mission (Odisha Liveable Habitat Mission) from Balasore (Odisha) through video conference, under which all slums in the State will be converted into Adarsh (ideal) colonies within the next 3 years.
ii.The Centre for Policy Research (CPR), New Delhi under its initiative ‘Scaling City Institutions for India: Land Planning and Housing (SCI-FI: LPH)’ has signed a Memorandum of Understanding (MOU) with the Housing & Urban Development Department, Government of Odisha as the knowledge partner of JAGA Mission in its second phase.
About Odisha:
Capital– Bhubaneswar
Governor– Ganeshi Lal
<<Read Full News>>

On September 28, 2020 Department of Industries & Commerce, Nagaland Government launched the Scheme “Livelihood Generation Programme for Returned Migrant workers due to COVID-19 Pandemic” to provide skill development training for migrant workers who returned from other parts of the country due to Pandemic.
i.The programme was launched by Imnatiba, Adviser for Industries and Commerce, Labour and Employment, Skill Development and Entrepreneurship at the Nagaland Civil Secretariat at Kohima.
ii.It is funded by North East Council (NEC), Shillong and will be monitored by the Department of Industries and Commerce.
iii.NEC has sanctioned Rs 2.40 crore for the implementation of this scheme.
Eligibility:
i.The returnee should be a indigenous Migrant worker from Nagaland and should have registered with the state COVID-19 returnees Portal.
ii.They should have reached Nagaland between 22nd May 2020 to 6th August, 2020.
About Nagaland:
Chief Minister – Neiphiu Rio
Governor – Ravindra Narayana Ravi

On September 20, 2020 The first-ever India Happiness Report 2020 was released by Professor Rajesh K Pillania, which ranks all 36 States and Union Territories(UTs) on the basis of their happiness quotient. Mizoram tops the ranking followed by Punjab and Andaman and Nicobar Islands. Odisha, Uttarakhand and Chhattisgarh were least happy states. The survey was conducted based on 6 components of happiness, namely work; relationships; health; philanthropy; religious, spiritual orientation; impact of COVID-19.