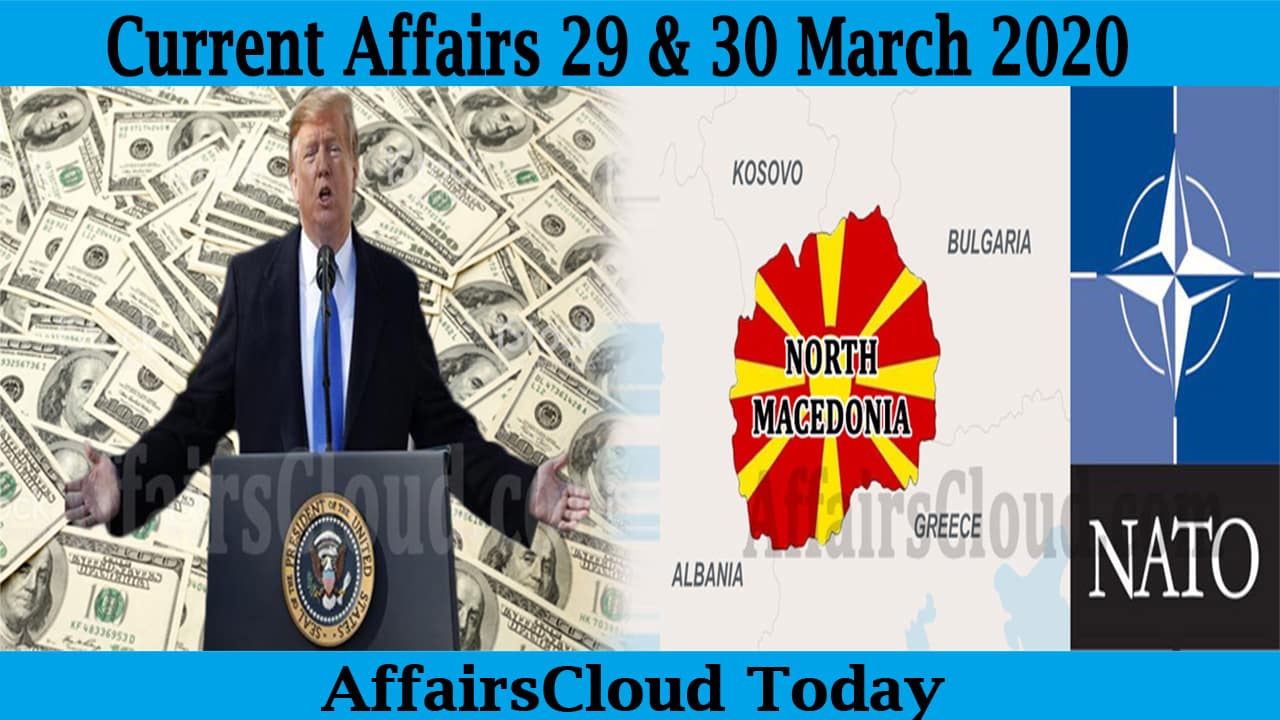 On March 27, 2020, Indian Army Chief General Manoj Mukund Naravane launched ‘Operation Namaste’ initiative to protect 1.3 million strong forces from coronavirus and provide all possible assistance to the government to control the pandemic.
Key Points
i.He urged all military personnel to take recommended precautions against the virus & also assured the soldiers and officers stationed at the border with Pakistan and China that special care is being taken for their families amid the virus.
ii.Under ‘Operation Namaste’, the army has issued a series of directives to all its bases to protect the force from the coronavirus & the army headquarters issued a number of suggestions to deal with the situation over the past few weeks. 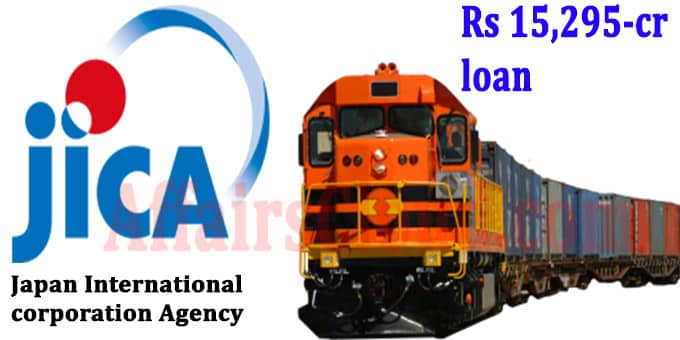 On March 27,2020, The Development of North Eastern Region (DoNER) Ministry and the North Eastern Council (NEC) will provide a financial assistance of Rs 25 crore to the States in the Northeast for gap funding to combat novel coronavirus (COVID-19).
Key Points:
i.The announcement has been made by the Union Minister of State (Mos) for DoNER, Dr Jitendra Singh during a review meeting attended by officials of the ministry and of NEC in Shillong, Meghalaya via video conference.
ii.The released fund will be used on any operations relating to COVID-19 pandemic, and not covered under current central packages.
iii.The ministry has also decided to arrange dedicated cargo flights to the northeast and other hill states to carry essential goods.
iv.Till now, 2 states in the Northeast-i.e Manipur & Mizoram have registered one COVID-19 positive case each.
About Ministry of Development of North Eastern Region:
Headquarters– New Delhi

On March 27, 2020 the Centre released Rs 4,431 crores to clear pending wages under Mahatma Gandhi National Rural Employment Guarantee Act, 2005(MGNREGA) & will also pay all dues (Rs 11,499 crores) by April 10, 2020.
Key Points
i.With this increase in wages, the national average wage under MGNREGA will rise from Rs 182 to Rs 202 per day.
ii.Totally there are 13.62 crore job cardholders under the MGNREGA, out of which 8.17 crores are active job cardholders.
iii.It also informed that Individual-oriented work(beneficiaries of Scheduled Castes and Scheduled Tribes) & work done by women under MGNREGA can continue their work during the lockdown.
iv.The release is made at a time of country’s lockdown to combat COVID-19 which has made wage labourers with no work & financial resources. 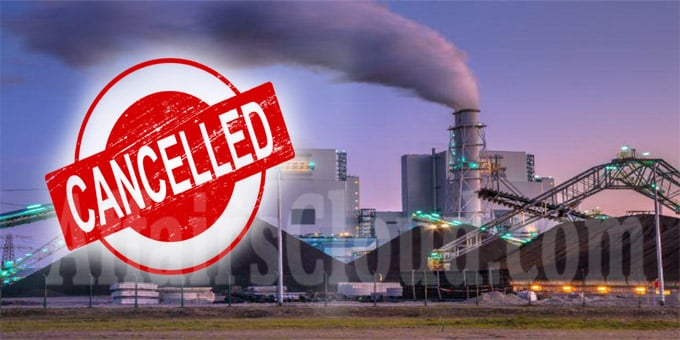 In accordance with a report titled “Boom and Bust 2020:Tracking the Global Plant Pipeline” 47.4 GW coal fired power projects at different stages were cancelled in India in 2019 which reduced total under development coal capacity to 66 GW. The report was prepared jointly by Global Energy Monitor, Greenpeace International, the Sierra Club, and Centre for Research on Energy and Clean Air (CREA). The report is the fifth annual survey of the coal plant pipeline. 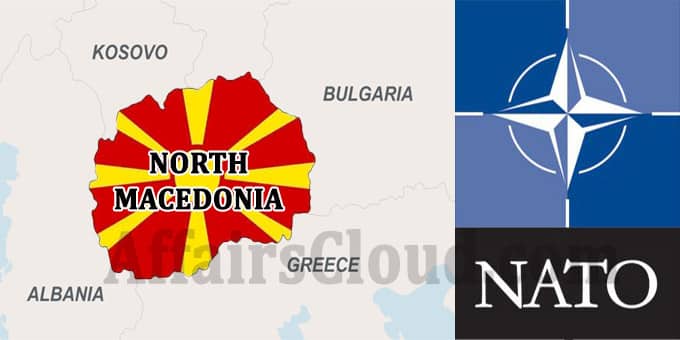 On March 27, 2020, The Republic of North Macedonia has inducted officially as the 30th and newest member of North Atlantic Treaty Organization (NATO). This membership comes after North Macedonia’s 2017 deal with Greece under which the former changed its name from Macedonia (a name same as Greek province). After the name change, Greece agreed to drop objections to its NATO and European Union (EU) membership. North Macedonia was granted a protocol on accession to NATO membership in February 2019.
About NATO:
NATO’s purpose is to guarantee the freedom and security of its members through political and military means.
Headquarter of NATO– Brussels, Belgium
Members– 30
Secretary General– Jens Stoltenberg
About North Macedonia:
Capital– Skopje
Currency– Macedonian denar
President– StevoPendarovski The United States of America (USA) will provide an additional USD 174 million financial assistance to 64  most at-risk countries which include USD 2.9 million to India as support for combating the coronavirus pandemic. In February 2020, the USA provided 100 million aid for the same purpose.

On March 25, 2020 the International Monetary Fund (IMF) has launched a policy tracker to track the policies of the governments so as to share knowledge about COVID-19 which helps to tackle the crisis.
Key Points
i.The policy tracker helps the countries to learn more about the experiences of others in combating the pandemic and adapt their policies and procedures to their unique circumstances and needs.
ii.It summarizes the key economic responses as of March 24, 2020.
iii.It is not meant for comparison among the member countries as policy responses differ according to the nature of shock & the circumstance of a country.
iv.It focuses on discretionary actions to support existing social safety nets & insurance mechanisms.
v.It includes 186 economies (G20 and European Institutions) & more countries will be added & information will be updated on a regular basis.
About IMF:
Headquarters– Washington D.C, United States
Managing Director (MD)– Kristalina Georgieva.

RBI has already injected liquidity of Rs 2.8 lakh crore in the financial markets through various instruments, which equal to 1.4% of GDP.This has been done to allow banks to lend more to business rather than deposit it with RBI.

On March 27, 2020, domestic rating agency ICRA notified that India’s Gross Domestic Product(GDP) is expected to contract by 4.5% in the April-June 2020 quarter & will rise 2%  in 2020-21 due to the impact of coronavirus.
Key Points
i.It also stated that a combination of moratoriums, liquidity boosting measures &  repo rate reduction will help stabilize markets & will provide some protection against widespread defaults despite the real impact of increasing economic activity may be limited.
ii.Following the outbreak of coronavirus in India, many analysts are revising their growth estimates and a host of developed countries
About ICRA:
ICRA Limited (formerly Investment Information and Credit Rating Agency of India Limited) is an independent and professional investment Information and Credit Rating Agency was set up in 1991. Moody’s Investors Service is its largest shareholder.
Headquarters– Gurgaon, India
Chairman– Dhruba Narayan Ghosh

B.P. Kanungo reappointed as Deputy Governor of RBI for a period of one year 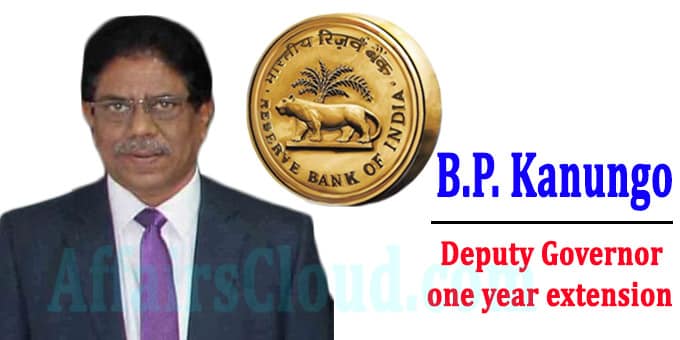 On March 27, 2020, The Appointments Committee of the Cabinet (ACC) headed by Prime Minister (PM) Narendra Modi, has approved the extension of the tenure of RBI (Reserve Bank of India) Deputy Governor, Bibhu Prasad Kanungo for a period of one year up to April 3, 2021. His tenure is going to end on April 2, 2020.
Key Points:
i.Kanungo was appointed as the Deputy Governor of RBI on April 3, 2017.He was assigned the portfolio of monetary policy and forecasting department in addition to his regular portfolio currency management after the exit of Viral Acharya.
ii.He served in various areas of the banks such as foreign exchange management, banking & non-banking Supervision, currency management, government and bank accounts etc.
About Reserve Bank of India (RBI):
Headquarters– Mumbai, Maharashtra
Formation– 1 April 1935
Governor– Shaktikanta Das
Deputy Governors– 4 (BP Kanungo, Mahesh Kumar Jain, Michael Debabrata Patra) & N S Vishwanathan ,who is due to retire on July 3,2020, has resigned on March 5,2020. 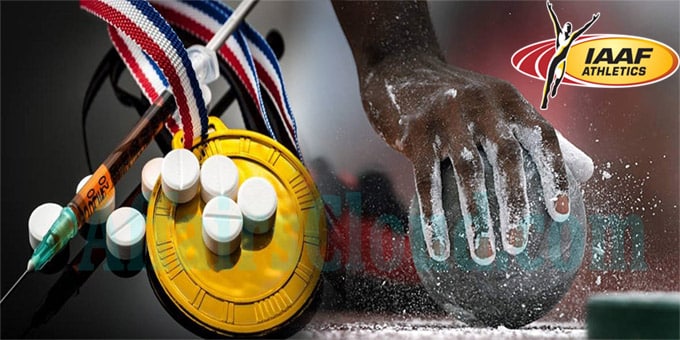 On March 28, 2020,The Athletics Integrity Unit (AIU) of international Athletics’s governing body -World Athletics’s (formerly known as International Association of Athletics Federations-IAAF), has suspended Indian shot putter Navin Chikara (23) for 4- years for failing an out-of-competition dope test in 2018.
Key Points:
i.Chikara is suspended for use of a banned substance GHRP-6 (Growth hormone-releasing peptide). This 4-year suspension will be considered effective from July 27, 2018.
ii.Chikara won the silver medal in the 2018 Federation Cup. At the same year, he was runner up in the Inter State Championship. In November 2018, a suspension was imposed on him.
About World Athletics:
Headquarters– Monaco
President– Sebastian Coe On March 27, 2020, Rajyogini Dadi Janki, the chief of Brahmakumaris Sansthan (world’s largest spiritual organization run by women) passed away at the age of 104 in Mount Abu, Rajasthan. She was born on January 1, 1916 in Hyderabad city located in Sindh province now in Pakistan.
Key Points:
i.About Rajyogini Dadi Janki: In the 1970s, she moved to western countries to establish Indian Philosophy, Raj Yoga and human values.
ii.She was also served as the brand ambassador of Swachh Bharat Abhiyan (Clean India Mission) by the government for her work in the field of maintaining cleanliness.
iii.She has set up ‘Seva Kendras’ in 140 countries around the world & women are chief administrators of 8000 centers. 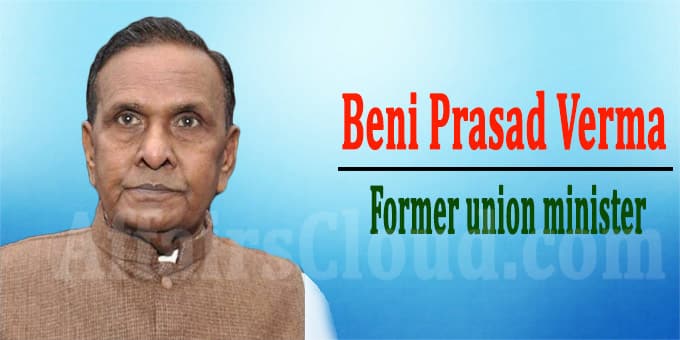 On March 27, 2020, Beni Prasad Verma, a founding member of the Samajwadi Party (SP) & former Union Minister passed away at the age of 79 in Lucknow, Uttar Pradesh (UP). He was born on February 11, 1941, in Barabanki, Uttar Pradesh (UP).
Key Points:
i.About Beni Prasad Verma: He was considered close to party patriarch Mulayam Singh Yadav.
ii.Verma served as the telecom minister between 1996-1998 in then Prime Minister (PM) H D Deva Gowda’s Cabinet and was the steel minister Congress- led UPA (United Progressive Alliance) government.

On March 28, 2020, America’s civil rights leader Joseph Echols Lowery passed away at the age of 98 in Atlanta, Georgia, US (United States). He was the key ally of Martin Luther King in the US civil rights movement of the 1960s. He was born on October 6, 1921 in Huntsville, Alabama, US.
Key Points:
i.Awards: Joseph Lowery was awarded the “Presidential Medal of Freedom”, the nation’s highest civilian honour, by former President Barack Obama in 2009.
ii.About Joseph Lowery: Lowery was the co-founder of SCLC (Southern Christian Leadership Conference) and often called the “dean” of the civil rights movement.
iii.He served as the President of the Southern Christian Leadership Conference for more than 2 decades, leading protests for civil rights in South Africa & peace in the Middle East. He also served as an American minister in the United Methodist Church.

UP CM Yogi Adityanath sets up ‘Team-11’ to beat Coronavirus 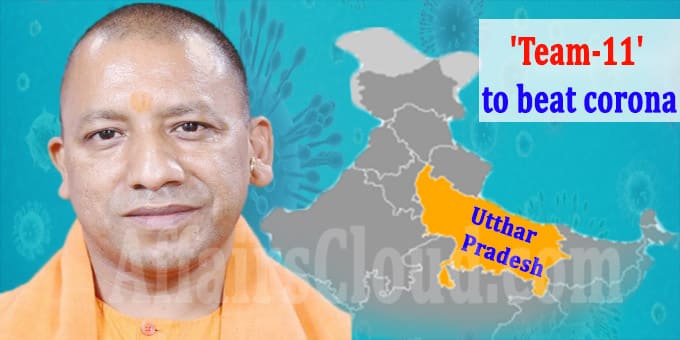 On March 27, 2020, Uttar Pradesh (UP) Chief Minister (CM), Yogi Adityanath, set up “Team-11” consisting of inter-departmental committees with over 2 dozen senior officials to fight the coronavirus spread. Each of the committees will be headed by a senior bureaucrat of the state while the CM will be the head of the Team-11….Click here to Read More