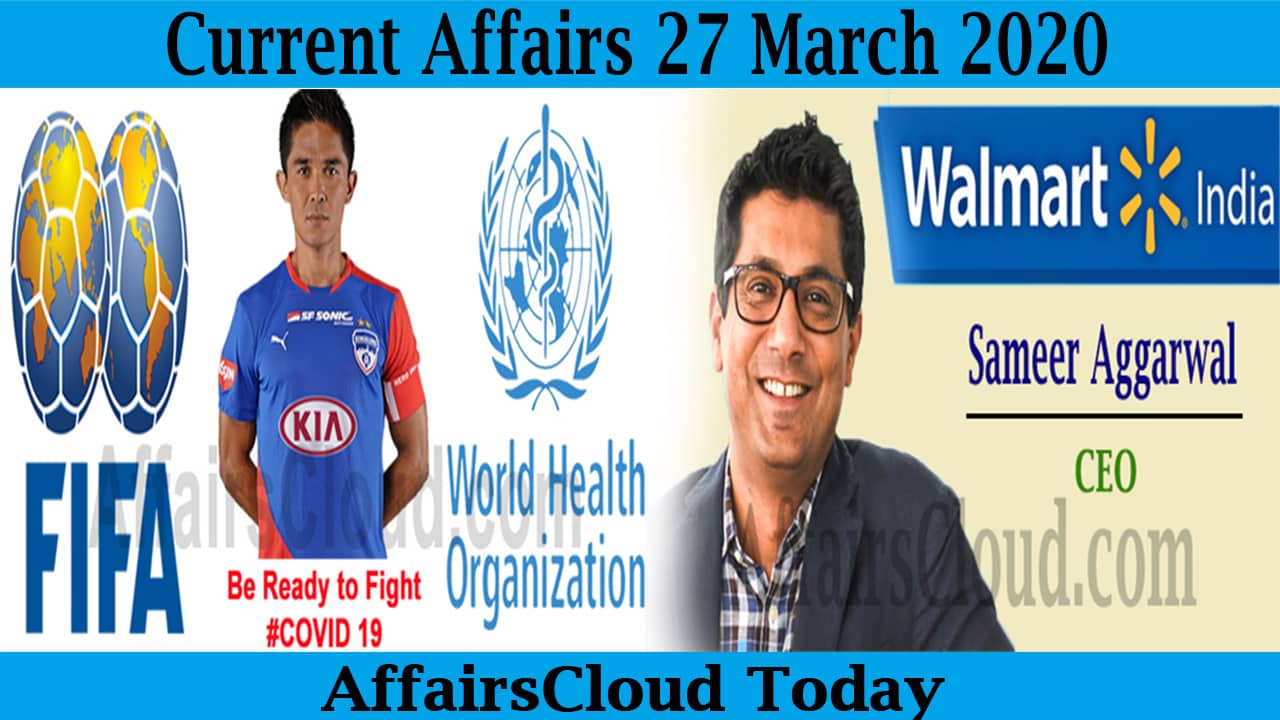 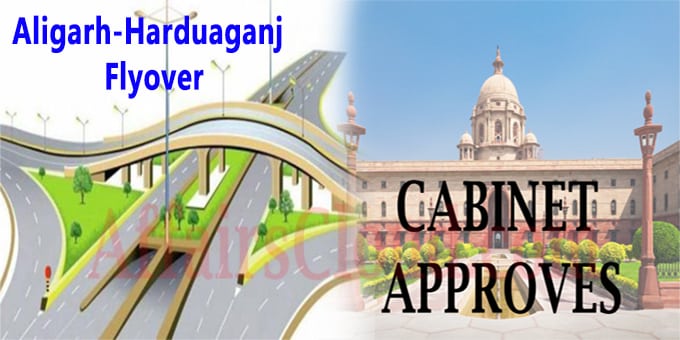 On March 25, 2020, the Union Cabinet headed by Prime Minister Narendra Modi has approved the following proposals:
-Cabinet approves extension of RoSCTL scheme for export of garments, made-ups from April 1, 2020

Indore becomes the 1st city in India to use drones to sanitize the city: COVID-19

On March 23, 2020, Indore (Madhya Pradesh), the cleanest city in India becomes the 1st city in India to use drones to sanitize the city against COVID-19 scare.
Key Points
i.Indore Municipal Corporation has hired 2 drones from a private company to sprinkle chemicals with sodium hypochlorite and bio-clean in crowded areas like vegetable markets, streets.
ii.The drones will depart with 16 litres of chemicals in each flight, spray chemicals in an area spanning 8-10 km  & return after 30 minutes.
iii.Special care is also being taken to ensure that the spray does not harm citizens.
About Madhya Pradesh
Capital– Bhopal
Chief minister– Shivraj Singh Chouhan 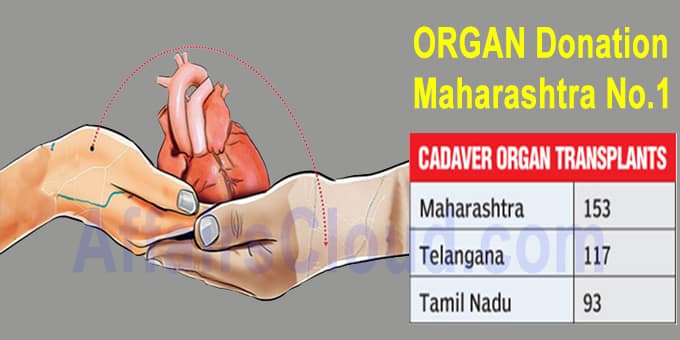 For the year 2019, the state of Maharashtra has donated the highest number of organs which resulted beneficial for 449 patients. The state overtook Tamil Nadu and Telangana in the field of organ donation.Regional Organ and Tissue Transplant Organisation-State Organ and Tissue Transplant Organisation (ROTTO-SOTTO) along with four Zonal Transplant Coordination Centre (ZTCC)of Mumbai, Pune, Nagpur, and Aurangabad in Maharashtra were the top performers….Click here to Read More

On March 25, 2020, 25 worshippers were killed and eight were injured during the attack by heavily armed four suicide bombers attack at Dharamshala, a Sikh worship place (Gurudwara) located in Kabul, Afghanistan. The responsibility of this deadliest attack on the minority Sikh community is taken by the Islamic State of Iraq and Syria (ISIS) terrorist group by issuing a statement. On March 24, 2020 Indian Football Captain Sunil Chhetri was selected among 28 members for FIFA (Fédération Internationale de Football Association) video campaign against Coronavirus.
FIFA and WHO (World Health Organization) have teamed up to combat the coronavirus by launching ‘Pass the message to kick out coronavirus’ (awareness campaign) led by world-renowned footballers.
Key Points:
i.About campaign: The ‘Pass the message to kick out Coronavirus’ campaign promotes 5 key steps such as hand washing, coughing etiquette, not touching your face, physical distance and staying home if feeling unwell and these steps protect the people’s health according to WHO guidance.
ii.The 28 players will be involved in the video campaign to be published in 13 languages, which includes some of the best-known players like Argentina Superstar Lionel Messi and World Cup Winners like Philip Lahm, Iker Casillas and Carles Puyol.
About FIFA:
Headquarters– Zurich, Switzerland.
President– Gianni Infantino. 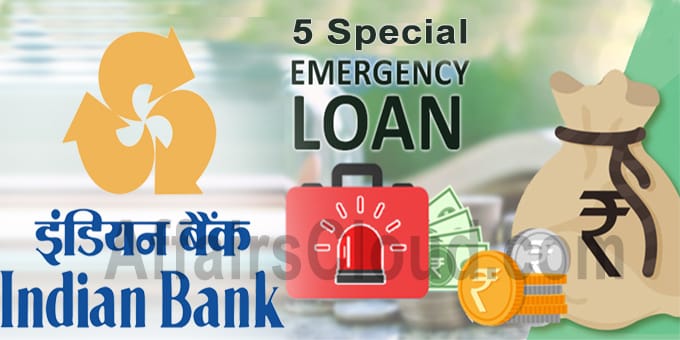 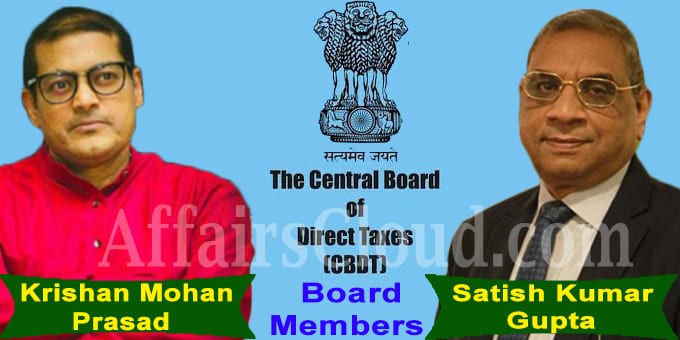 On March 25, 2020, The Appointment Committee of the Cabinet approved the appointment of two Indian Revenue Service (IRS) officers Krishan Mohan Prasad and Satish Kumar Gupta as members of the Central Board of Direct Taxes (CBDT).
Key Points:
i.The interaction for 2 vacant CBDT board member posts was held on January 23, 2020 & finally these 2 officers were appointed as board members from 8 shortlisted candidates.
ii.About Krishan Mohan Prasad: He is a 1984 batch IRS officer, serves as the head of Faceless e-Assessment scheme as first Principal Chief Commissioner of Income-tax, National e-assessment centre in Delhi.
iii.About Satish Kumar Gupta: He is a 1984 batch IRS officer, serves as the Principal Chief Commissioner (PCCIT) of I-T (Income Tax) in Mumbai, Maharashtra & also served as Director-General of Investigation of Bhopal and Jaipur.
About CBDT
Central Board of Direct Taxes (CBDT) is the apex policy-making body of the Direct Tax department. It functions under the Department of Revenue of the Ministry of Finance.
Chairperson– Pramod Chandra Mody. 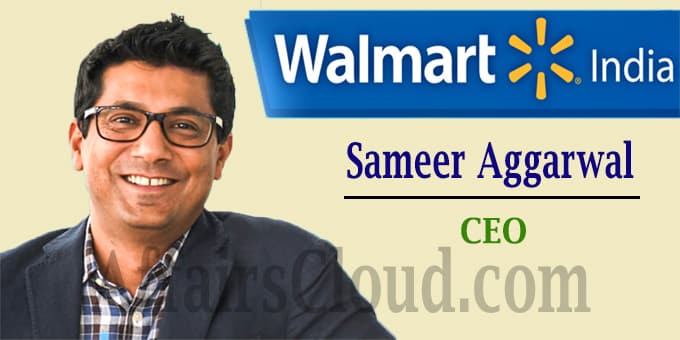 On March 25, 2020 Walmart announced that it has promoted Sameer Aggarwal as Chief Executive Officer(CEO) of Best Price, Walmart India which is effective from April 1, 2020. He will succeed  Krish Iyer who is to retire on March 31, 2020, from 8 years of full-time management and will get into an advisory role.
Key Points
i.Sameer Aggarwal joined Walmart India in April 2018 as Executive Vice President & was promoted to Deputy CEO in January 2020.
ii.Walmart India owns & operates 28 modern wholesale stores under the brand name Best Price in 9 states across the country & also has 2 Fulfillment centres in India.
iii.Walmart India is a wholly-owned subsidiary of US-based retailer Walmart which came to India in 2007.

On March 25, 2020, A team of Scientists from Agharkar Research Institute (ARI) in Pune, Maharashtra, have developed ‘MACS 4028’, a biofortified wheat variety, which shows high-protein content of around 14.7% good nutritional quality having zinc 40.3 ppm, and iron content of 40.3ppm and 46.1ppm (parts per million) respectively.
Key Points:
i.The development done by the scientist has been published in the Indian Journal of Genetics and Plant Breeding.
ii.MACS 4028, a semi-dwarf variety, matures in a period of 102 days and has a very good yielding ability of 19.3 quintals per hectare. This variety also shows a better resistance to crop disease like stem rust, leaf rust and common pests of dryland wheat including foliar aphids, root aphids, brown wheat mite.
iii.It has been included under the Biofortified category by Indian Council of Agricultural Research (ICAR) during the year 2019.
iv.The MACS 4028 variety is also included by the Krishi Vigyan Kendra (KVK) programme for United Nations Children’s Fund (UNICEF) to alleviate malnutrition in a sustainable way and can boost the Vision 2022 “Kuposhan Mukt Bharat”, the National Nutrition Strategy.
What is the biofortified variety?
Fortified varieties are developed to provide the crop with the right amount of essential nutrients.
The quantities of iron, Zinc, Vitamin A &D in these varieties are increased through changes in genes.

On  March 25, 2020, International Advanced Centre for Powder Metallurgy & New Materials (ARCI), Hyderabad (Telangana), which functions as a grants-in-aid institution of the Government of India’s Department of Science & Technology (DST), has developed ‘ultrafast laser surface texturing technology’, which can enhance the efficiency of fuel in internal combustion (IC) engines by reducing friction.
Key Points:
i.By using this technology, the friction of the engines has been reduced by controlling the size, density and shape of the micro-surface texture features, which are created by using a pulsating laser beam.
ii.On the surface of the materials, the pulsating beam creates micro-dimples of 10-20 μm diameter with about 5-10 μm deep, grooves and cross-hatches which in turn trap wear debris that usually increases friction.It has been done under dry sliding conditions to provide better oil supply (lubricant reservoir) which can lower friction coefficients and reduce the wear rate.
iii.The textures were developed on components of automotive internal combustion engine such as piston rings and cylinder liners using 100 fs pulse duration laser & the trail run has been undertaken at the ARCI lab under different speeds and also at different temperatures of lubrication oil and coolant. 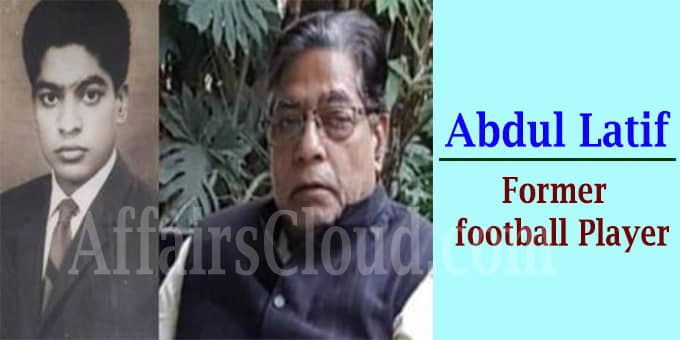 On March 23, 2020, Abdul Latif, former India football player and 1970 Asian games bronze medallist passed away at the age of 73 in Guwahati, Assam. He also represented India in Asia Cup Qualifier in 1968 in Myanmar and Merdeka Cup in 1969 in Kuala Lumpur.
Key Points:
i.About Latif: He was born on June 20 of 1947 in Mysore, Karnataka.He played as a midfielder and also played for the two famous Kolkata clubs Mohammedan Sporting Club and Mohun Bagan.
ii.He was the coach of the Assam team which won the junior & sub-junior national titles under his guidance. 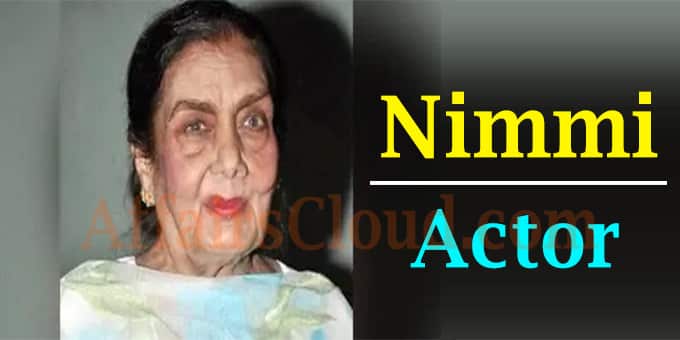 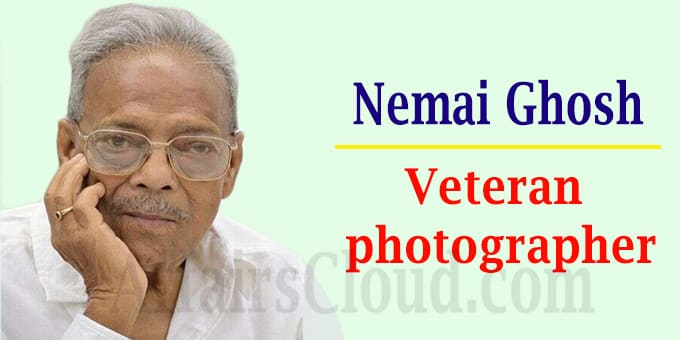 On March 25, 2020 Veteran photographer & Padma Shri(2010) awardee, Nemai Ghosh passed away at 86 due to his age-related ailments at his birthplace Kolkata.
Key Points
i.He is known for working with director Satyajit Ray as a still photographer who captured the director, framing actors over 2 decades.
ii.He debuted with “Goopy Gyne Bagha Byne” (1969) and was with Satyajit Ray till his last film “Agantuk” (1991).
iii.He also wrote books like, “Dramatic Moments: Photographs and Memories of Calcutta Theatre from the Sixties to the Nineties” & “Manik Da: Memoirs of Satyajit Ray” among others.

Pakistan’s efforts have suffered a set-back of launching 750 km range ground cruise missile Babur II with the delivery platform crashing to the ground after two minutes or 14 kilometres(km) in flight from the launch point at Sonmiani test range in Balochistan. The capital and currency of Pakistan are Islamabad and Pakistani rupee respectively. 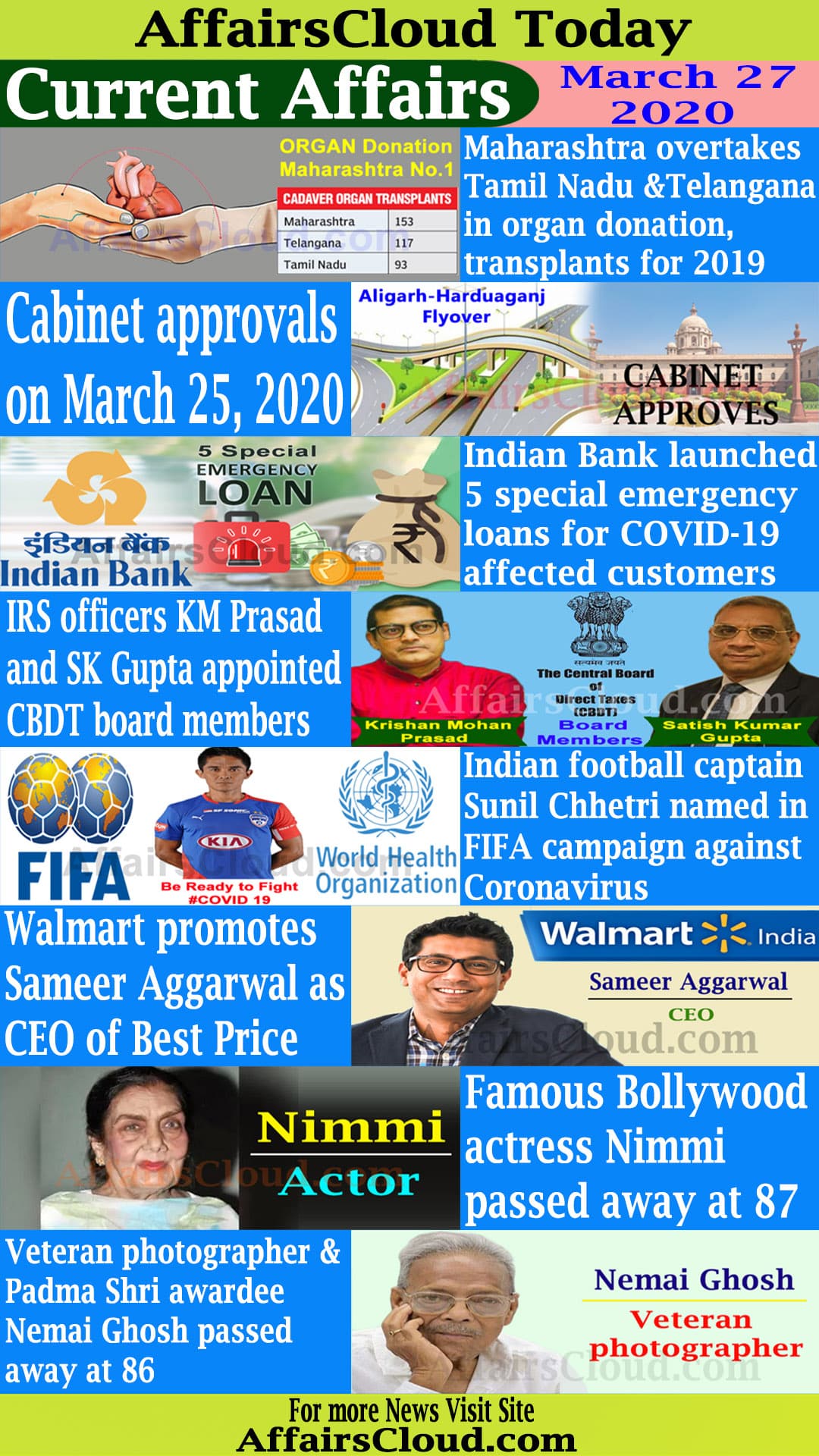