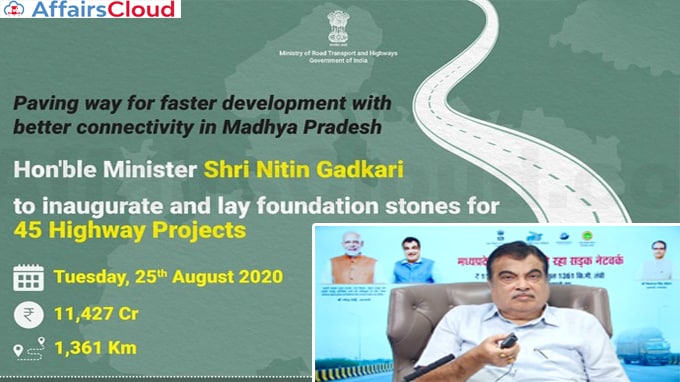 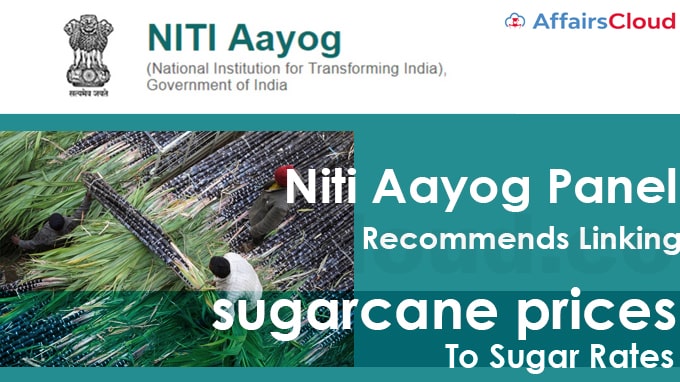 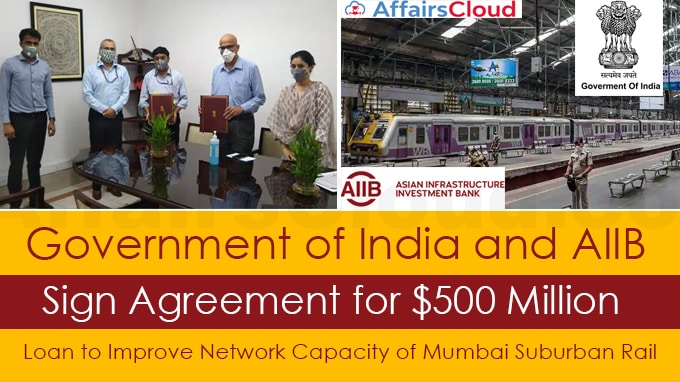 i.On August 24, 2020, a quartet loan agreement was inked between Government of India, the Government of Maharashtra, Mumbai Railway Vikas Corporation (MRVC) and the Asian Infrastructure Investment Bank (AIIB) for Mumbai Urban Transport Project-III. The agreement aims to improve the network capacity, reduction in journey time and fatal accidents of commuters, service quality and safety of the suburban railway system in Mumbai, Maharashtra.
ii.The total estimated cost of the project is $997 million, of which $500 million will be financed by the AIIB, $310 million by the Government of Maharashtra and $187 million by the Ministry of Railways. The loan from the AIIB has a 5-year grace period and a maturity of 30 years.
About Asian Infrastructure Investment Bank (AIIB):
President– Jin Liqun
Headquarters– Beijing, China
About Maharashtra:
Chief Minister (CM)– Uddhav Bal Thackeray
Capital– Mumbai
Governor– Bhagat Singh Koshyari
<<Read Full News>> 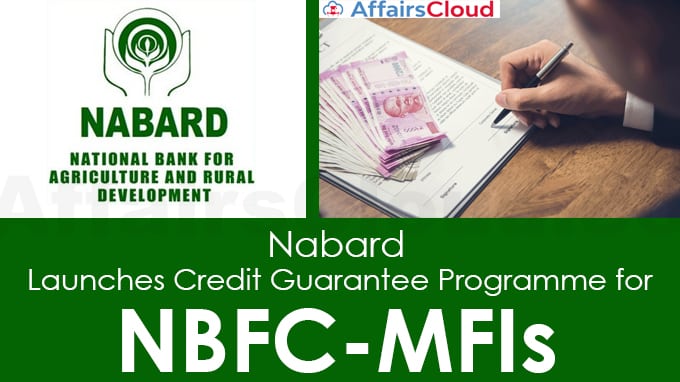 i.ICICI Bank uses satellite data(imagery from Earth observation satellites) to assess credit worthiness of farmers.
ii.ICICI Bank has become the 1st bank in India to use such a technique to measure an array of parameters related to the land, irrigation and crop patterns and use it in combination with demographic and financial parameters to make quick lending decisions for farmers.
iii.The satellite data with demographic and financial details, provides strong information on the land asset of the farmer.
About ICICI Bank:
Headquarters– Mumbai, Maharashtra
MD & CEO– Sandeep Bakhshi
Tagline– Hum Hai Na, Khayal Apka
<<Read Full News>>

MasterCard and Goals101.ai Partnered to create Targeted and Personalised Offers for Bank Cardholders 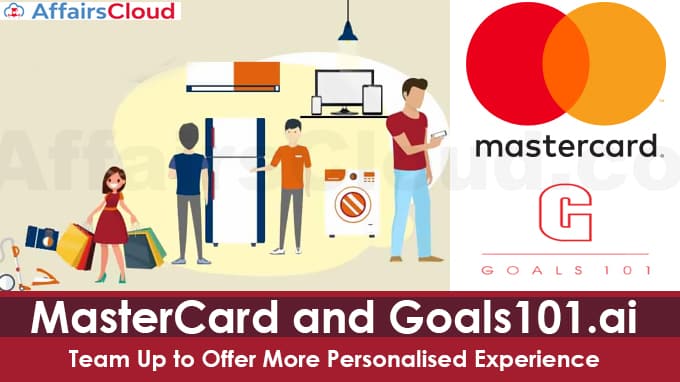 i.Mastercard has entered into an alliance with Goals101.ai, the leading bank-tech and Artificial Intelligence(AI) company.
ii.Through this alliance, Goals101.ai connects merchants and issuers using big data, AI and automation to create targeted and personalized offers for Bank cardholders. iii.Through this partnership, Mastercard and Goals101.ai will  launch a section within the platform called ‘For You’ which will unify all the bank channels and properties into one.
About Mastercard:
Headquarters– New York, United States
Chief Executive Officer– Ajay Banga(Michael Miebach will succeed him by Jan1, 2021)
About Goals101.ai:
Headquarters- New Delhi, India
Chairman & MD- Visham Sikand
<<Read Full News>>

i.SBI General Insurance Co Ltd  launched a 1st of its kind offering, ‘Shagun – Gift an Insurance’, a unique gift of Personal Accident policy.
ii.It provides complete financial protection to the insured person against uncertainties such as accidental death and partial or total disabilities, and permanent &  temporary disabilities resulting from an accident.
iii.This policy can be gifted to anyone like friends, families, domestic helpers in the age group of 18 years to 65 years.
About SBI General Insurance Co Ltd:
Headquarters– Mumbai, Maharashtra
MD and CEO– Prakash Chandra(P.C.) Kandpal
<<Read Full News>> 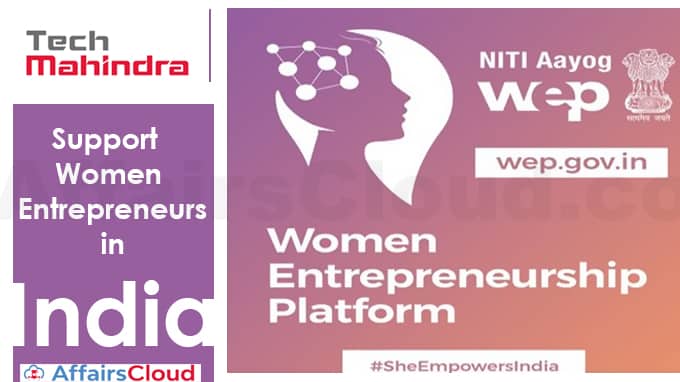 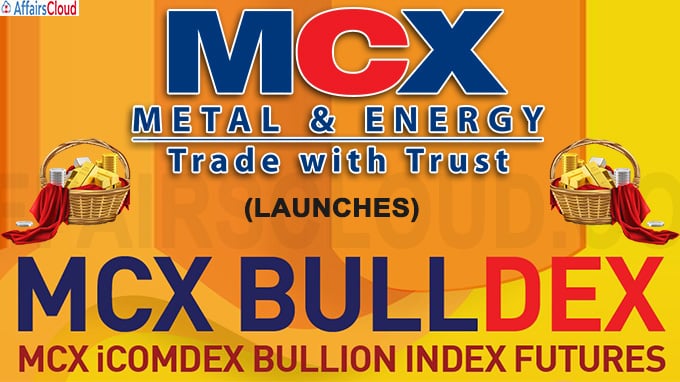 Note– MCX has waived the transaction fee for 1st 3 months
About MCX iCOMDEX Bullion Index future contract:
Trade– The MCX iCOMDEX Bullion Index future contracts that expire in September, October and November, 2020 are available for trade.
Equal to 50 times– The contract has a lot size equivalent to 50 times the base of MCX iCOMDEX Bullion Index.
Tick Size– The tick size (minimum price movement) for the contract is Rs 1.
Cash Settlement– Contracts will be finally settled in cash at the expiry when each contract expires.
Final Settlement Price-The final settlement price will be the base index price arrived on the basis of Volume Weighted Average Price (VWAP) of the constituents of the underlying index between 4.00 p.m. and 5.00 p.m. on the expiry day of the index futures contract.
About Multi-Commodity Exchange of India Ltd:
Headquarters-Mumbai, Maharashtra
Chairman– Saurabh Chandra
MD & CEO- P.S. Reddy 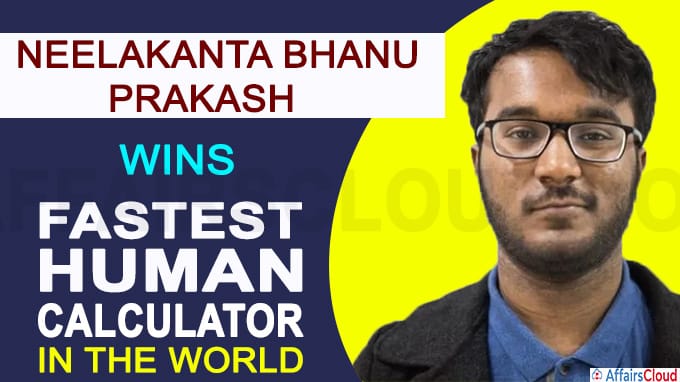 Twenty-Year old Neelakantha Bhanu Prakash Jonnalagadda of Hyderabad has bagged the first ever Gold Medal for India in Mental Calculations (MC) World Cup (MCWC) held on August 15, 2020 by Mind Sports Olympiad (MSO).
i.The MSO was held virtually with 30 participants, who were upto 57 years of age. The participants were from 13 countries including the UK, Germany, UAE, France, Greece and Lebanon.
ii.Bhanu Prakash had secured the gold medal with a score of  167, Lebanese contender Mohammed El Mir secured the Silver Medal with a score 102 and Asmita Pal  from the UAE  bagged the Bronze medal with a score of 100 points.
iii.He has created a new All Time Record and has beaten the records of Math Maestros like Shakuntala Devi and Scott Flansburg.
iv.India’s Aryan Shukla finished fourth with a score of 96.
About Neelakantha Bhanu Prakash Jonnalagadda:
Neelakantha Bhanu Prakash is a student of Mathematics (Honors) at Delhi University’s St Stephen College and holds 4 World Records and 50 Limca records for being the fastest human calculator in the world.
About MSO:
The MSO is an international event with over 60 different board game competitions ranging from classics like Chess, Scrabble and 7 Wonders. It was first held in 1998. 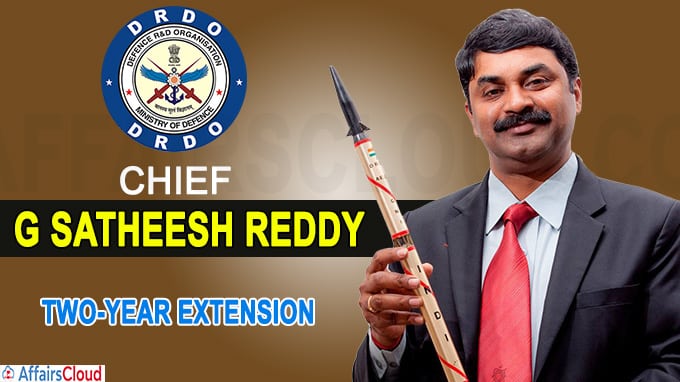 On 24th August, 2020 Renowned Aerospace Scientist Dr G. Satheesh Reddy was given a two-year extension as Chairman of the Defence Research and Development Organisation (DRDO) & as Secretary of the Department of Defence Research & Development(DoDRD) by the Appointments Committee of the Cabinet.
G Satheesh Reddy was appointed to the post in August 2018 for a tenure of two years.
About Satheesh Reddy:
i.Satheesh Reddy was born in Atmakuru, Nellore District, Andhra Pradesh.
ii.He was appointed as Scientific advisor to the Defence Minister of India in June, 2015.
iii.Satheesh Reddy also heads Dr APJ Abdul Kalam Missile Complex, a Military Missile Research Centre in Hyderabad, India.
iv.Satheesh Reddy is one of the Chief Architects behind India’s Mission Shakti, Anti Satellite Missile Test (ASAT).
Recent Related News:
i.DRDO provides the drone named “Bharat” to the Indian Army– indigenously developed by the DRDO and will help in monitoring high altitude  areas along LAC in Eastern Ladakh (China Border).
ii.Institute of Nuclear Medicine and Allied Science(INMAS) a Delhi based laboratory of DRDO has developed “Ultra Swachh”, a disinfection unit to disinfect Personal Protective Equipments (PPEs), electronic items, fabrics and other materials.
About DRDO:
Chairman – G Satheesh Reddy
Headquarters  – New Delhi

IEX accepted the resignation of its MD & CEO Rajiv Srivastava 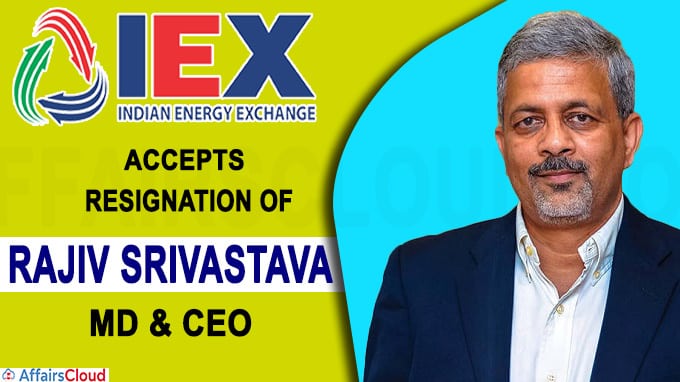 On 24th August 2020, the Board of Directors of Indian Energy Exchange(IEX) accepted the resignation of its Managing Director(MD) and Chief Executive Officer(CEO) Rajiv Srivastava. He was relieved from his position as MD & CEO with immediate effect from 24th August 2020.
Interim MD & CEO:
i.Satyanarayan Goel, the current non-executive chairman of the board of IEX was given additional charges as the interim MD and CEO of the company.
ii.Goel served as the MD and CEO of the company from January 21, 2014 to July 20, 2019.
About Indian Energy Exchange(IEX):
Interim MD & CEO– Satyanarayan Goel
Headquarters– New Delhi 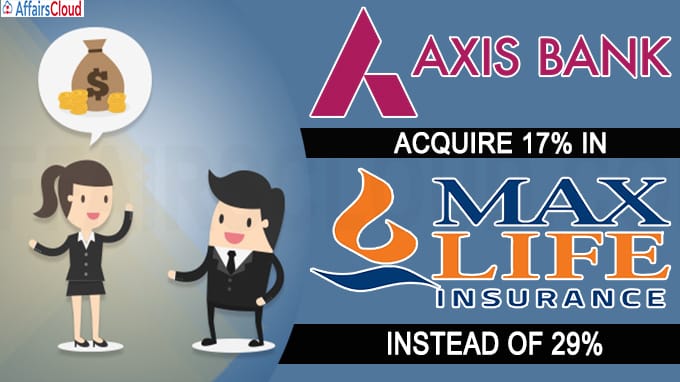 Axis Bank Ltd(Axis Bank) to acquire 17%(17.002%) of the equity share capital in Max Life Insurance(Max Life), instead of 29%. After the transaction, the total ownership of Axis bank in Max Life will be 18%. The parties have executed definitive agreements. 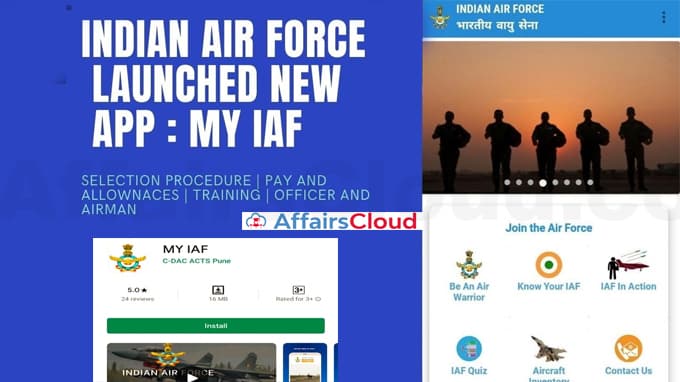 i.On August 24, 2020, in accordance with the Inter-University Centre for Astronomy and Astrophysics (IUCAA) in Pune, Maharashtra, India’s first multi- wavelength satellite observatory, ASTROSAT, has detected an extreme ultraviolet (UV) light from a galaxy called “AUDFs01” which is 9.3 billion light-years away from Earth. The galaxy is located in the Hubble Extreme Deep field (XDF).
ii.The discovery of UV light from AUDFs01 was made by an international team of astronomers from India, France, Switzerland, the USA (United States of America), Japan and The Netherlands which was led by Dr Kanak Saha, associate professor of astronomy at the IUCAA.
iii.The study is published in “Nature Astronomy”.
About Inter-University Centre for Astronomy and Astrophysics (IUCAA):
Director– Dr Somak Raychaudhury
Location – Pune, Maharashtra
<<Read Full News>> 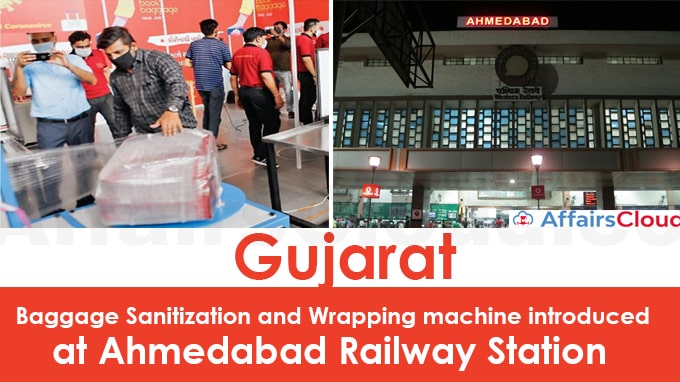 On 25th August, 2020 Ahmedabad Railway Division launched the Baggage Sanitization and Wrapping Machine  at the Ahmedabad Railway station to ensure  safe travel for the passengers during the Pandemic.
The Ahmedabad Railway Division has introduced the machine after considering the increase in transport and travel services after Unlock-1 Phase.
Key points:
i.The indigenously made baggage sanitization and wrapping machine have been set up  under the Atmanirbhar Bharat concept.
ii.The 360 degree sanitization of the luggage will be done using ultraviolet radiation, there will be no harmful effects of UV rays on tiffins, food, vegetables or water kept in the baggage.
iii.The service is paid and voluntary and charges will vary depending upon the size and weight of the luggage.
iv.The railways has taken this  initiative under the New Innovative Non Fare  Revenue Idea Scheme (NINFRIS).
Recent Related News:
i.Indian Railways  has planned to roll out 151 private train services by 2027 on 109 pairs of routes across the country.
ii.Indian Railways’ Central Railway zone has installed an Automated Ticket Checking & Managing Access(ATMA) machine, 1st of its kind at Nagpur station.
About Indian Railways:
Chairman – Vinod Kumar Yadav
Headquarters – New Delhi On 24th August 2020, Pascal Lissouba, former President of Republic of Congo, which is also known as Congo-Brazzaville passed away at the age of 88 in Southern France due to illness. He was born in Tsinguidi, Republic of Congo.He belonged to the Pan-African Union for Social Democracy (UADS) party.
About Pascal Lissouba:
i.Pascal became the minister of agriculture in 1960 after Congo became an independent country.
ii.He served as the Prime minister under the Presidency of Alphonse Massamba Debat.
He won the first multi-party presidential elections of the Republic of Congo, in 1992.
iii.He served as the president from 1992 to 1997.
iv.He fled to France in 1997 after he was overthrown by Denis Sassou Nguesso, the current president of Congo, in the civil war.
v.The high court of Justice in Republic of Congo sentenced Pascal Lissouba in absentia to 30 years forced labor for treason and corruption in 2001.
About  Republic of Congo(Congo-Brazzaville):
President– Denis Sassou Nguesso
Prime Minister– Clément Mouamba
Capital– Brazzaville

‘Running Toward Mystery: The Adventure of an Unconventional Life’ Authored by Tenzin Priyadarshi and Zara Houshmand 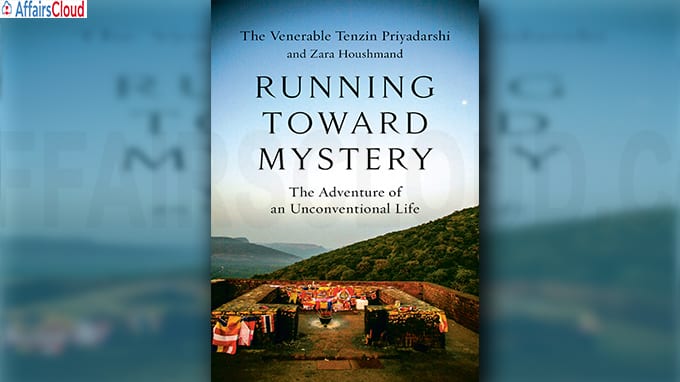 On 25th August, 2020 the book ‘Running Toward Mystery: The Adventure of an Unconventional Life’ authored by Tenzin Priyadarshi and co-written by Zara Houshmand released. The book provides an account of how the Dalai Lama traced his Spiritual Teacher Khunu Lama in India.
Tenzin Priyadarshi is the President and CEO of The Dalai Lama Center for Ethics and Transformative Values at the Massachusetts Institute of Technology (MIT) and Zara Houshmand is an Iranian American author and literary translator.
i.The author Priyadarshi talks about teachers who have influenced his life including Dalai Lama, Former Archbishop of Cape Town Desmond Tutu and Mother Teresa.
ii.The book also shares his thoughts on Science and Technology,  Meditation and Spiritual  Disillusionment and the relationship between Buddhism and the modern world.
iii.Further, he describes his life at MIT and describes how the 2008 financial crisis gave critical momentum for the formation of The Dalai Lama Center for Ethics and Transformative Values. 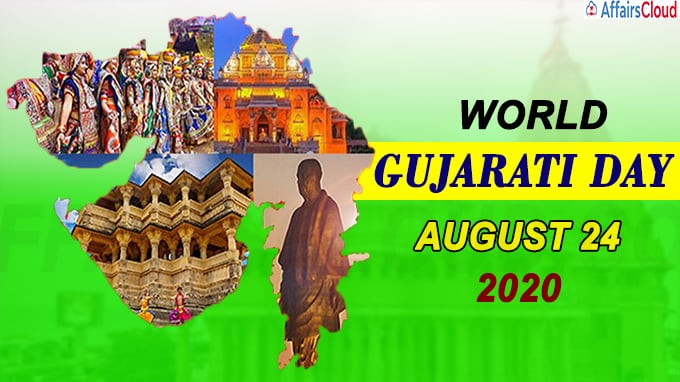 World Gujarati Day 2020  is celebrated  on 24th August 2020 to commemorate the birth anniversary of the famous Gujarati poet and social reformer, Narmadashankar Dave popularly known as Veer Narmad. The world Gujarati day is dedicated to the Gujarati language and literature.
About Veer Narmad:
i.Veer Narmad was considered as the founder of Modern Gujarati literature and he was also  known as the first poet in Modern times to introduce courage and creativity through ‘Dandio’.
ii.He was a visionary creator, philosopher and a pioneer of social justice.
iii.His poem “Jai Jai Garavi Gujarat” is used as the state song of Gujarat.(the hindi lyric was written by Prasoon Joshi).
Key Point:
On the occasion of World Gujarati day, Prime Minister Narendra Modi extended his wishes to all the gujarati’s around the world.