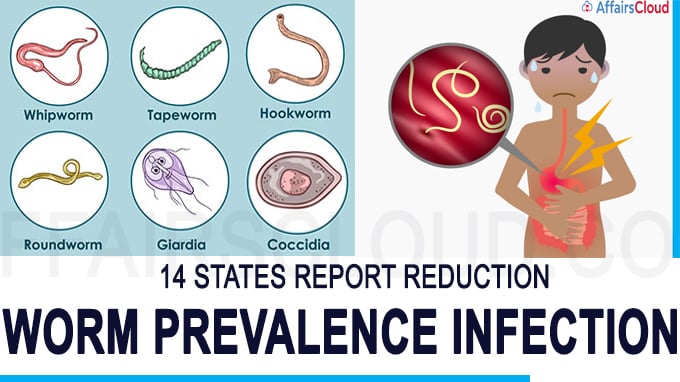 i.In accordance with the Ministry of Health And Family Welfare (MoHFW) Fourteen states have reported a reduction in parasitic intestinal worm infection or Soil-Transmitted Helminthiases (STH) which has a harmful effect on children’s physical growth and can cause anaemia and under-nutrition.
ii.This feat has been achieved due to the regular deworming through Albendazole tablet as advised and approved by the World Health Organization (WHO) for treatment of intestinal worms in children and adolescents (1-19 years) living in areas with high STH burden. It is a part of Mass Drug Administration (MDA) programmes globally.
iii.Notably, Chhattisgarh, Himachal Pradesh (HP), Meghalaya, Sikkim, Telangana, Tripura, Rajasthan, Madhya Pradesh and Bihar have shown substantial reduction in worm prevalence.
About Ministry of Health and Family Welfare (MoHFW):
Union Minister– Dr. Harsh Vardhan (Constituency- Chandni Chowk, Delhi)
Minister of State (MoS)– Ashwini Kumar Choubey
<<Read Full News>> 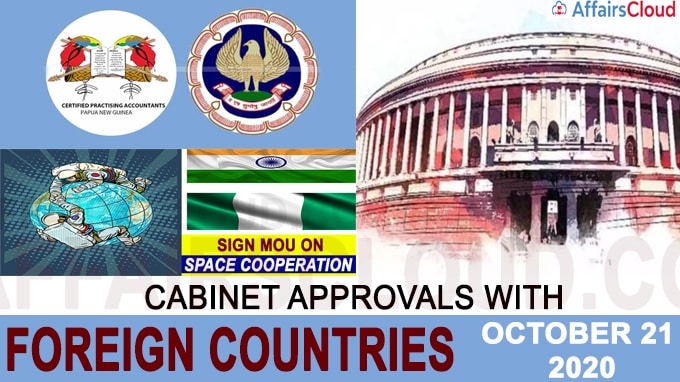 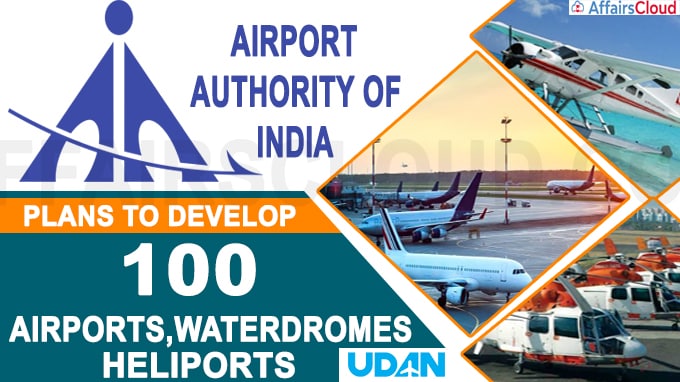 Third Phase of National Supercomputing Mission to commence from January, 2021 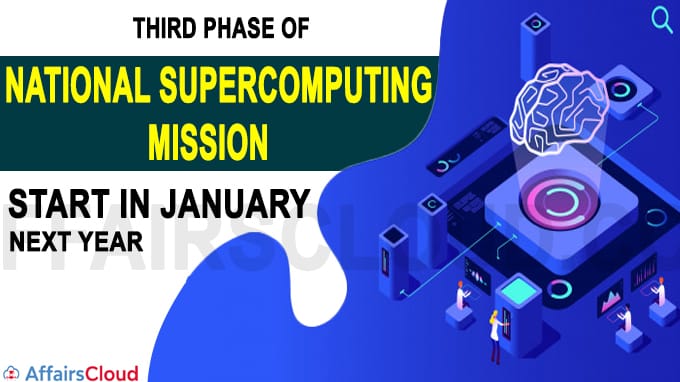 On October 16, 2020, Andorra formally joined the International Monetary Fund (IMF) as 190th Member as Ambassador of Andorra, Elisenda Vives Balmana signed IMF’s Articles of Agreement at IMF Headquarters in Washington D.C., USA (United States of America).
Andorra had applied for membership to the IMF in January 2020.
Key Points:
i.Andorra’s Initial Quota in the IMF is SDR (Special Drawing Right) 82.5 Million or About USD 116.4 Million.
ii.The Initial Quota will determine its capital subscription, voting power, access to IMF financing, and allocation of SDRs.
iii.The membership will allow Andorra to benefit from IMF policy advice, get Annual Review or “health check” of its economy by IMF and access to IMF lending if needed.
Principality of Andorra:
i.Andorra is the Sixth Smallest Nation in Europe, and the Largest MicroState in Europe.
ii.Trade, Tourism and Banking are the main industries in Andorra.
iii.According to the IMF, Trade and Tourism comprise close to 40% of Andorra’s economic output.
iv.According to World Bank Data, Andorra had a population of 77, 142 in 2019 and a GDP (Gross Domestic Product) output of USD 3.15 Billion, qualifying it as a “High-Income” Country.
About Principality of Andorra:
Prime Minister – Xavier Espot Zamora
Capital – Andorra la Vella
Currency – Euro (It is not a member of European Union)
About International Monetary Fund (IMF):
Managing Director – Kristalina Georgieva
Headquarters – Washington D.C., USA 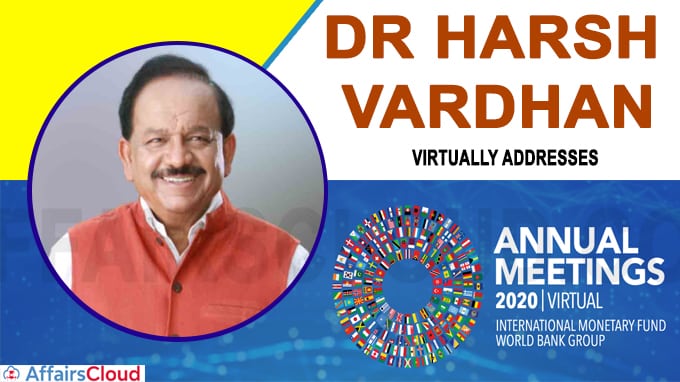 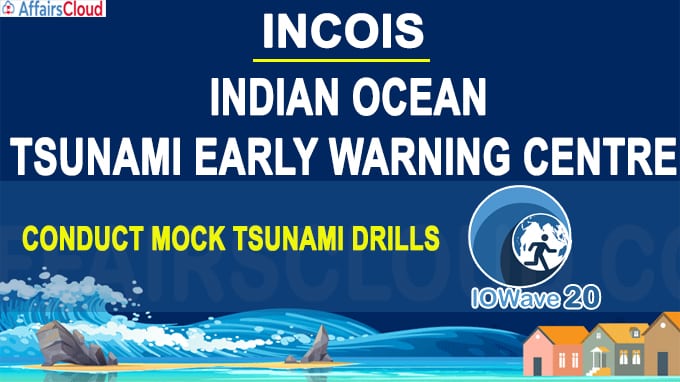 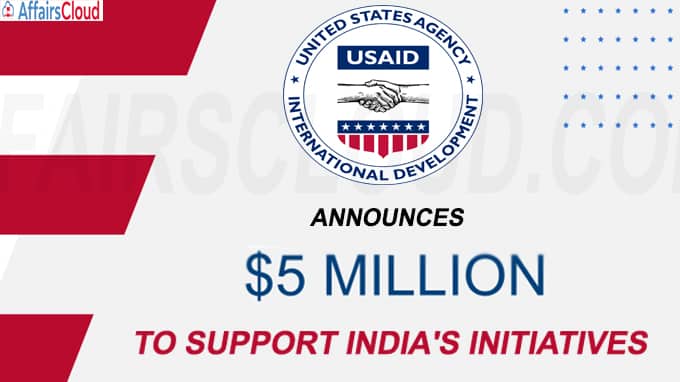 On 21st October 2020, the United States(US) Agency for International Development (USAID) announced two new awards of total 5 Million USD (around Rs.36.8 crore) to Catalyst Management Service’s COVID Action Collaborative (CAC) and the Wadhwani Institute for Artificial Intelligence (Wadhwani AI). These two new awards are also a part of the continuous support of the US government to the COVID-19 initiatives of India.
Note:
The total financial assistance of USAID for India’s COVID-19 response is around 13 million USD (around Rs.95.75 crore).
About the 5 million USD funding:
i.The 3 million USD (around Rs.22.1 crore) partnership with CAC for two years will be used to strengthen the capacity of 100 local organizations, 10 local governments and 15 associations of healthcare providers, small retailers, and street vendors, and will link them with government and private sector resources by which the 10 million disregarded and endangered individuals who were affected by COVID-19.
ii.The 2 million USD awarded to the Wadhwani AI, a nonprofit research institute will be used to develop tools to forecast the disease pattern of COVID-19, estimate the required resources and intervention plans.
iii.These tools will be developed using mathematical modeling techniques and digital technologies like AI and machine learning.
Benefits:
i.CAC will provide a platform to combine the efforts of the industry and development partners to support the control and prevention efforts against COVID-19 in India.
ii.The platform will also be used to coordinate the ongoing USAID activities which are against the impacts of the global pandemic and reaching the vulnerable populations.
About United States(US) Agency for International Development (USAID):
Acting Administrator– John Barsa
Headquarters– Washington, D.C, United States of America i.India-Assisted Mangdechhu Hydroelectric Project, a Bhutan-India Friendship project in Bhutan won the 2020 Brunel Medal for Excellence in Civil Engineering at the Annual Institution of Civil Engineers(ICE) Awards 2020 organised by the United Kingdom (UK) based ICE.
ii.India funded the Mangdechhu power plant of cost Rs.4500 crore through a 70% loan and 30% grant.
iii.The annual ICE awards recognises the achievements of civil engineering and the contribution to the profession of engineering and the ICE.
About Bhutan:
Prime Minister– Lotay Tshering
Capital– Thimphu
Currency– Bhutanese Ngultrum
<<Read Full News>> 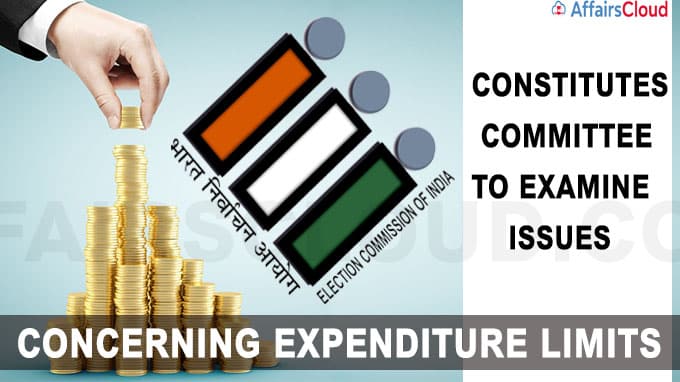 On 21st October 2020, Election Commission of India(ECI) constituted a committee to examine the issues regarding the limits of expenditure for a candidate. The committee comprises Harish Kumar, former Indian Revenue Service IRS officer and Director General (Investigation) and Umesh Sinha, Secretary General of ECI and DG (Expenditure).
Role of the Members:
i.Umesh Sinha and Harish Kumar will examine the expenditure limits of the candidates of the election in the view of increasing number of electors and rise in the cost inflation index and other factors.
ii.The committee will submit the report within 120 days.
Term of reference of the committee:
i.To assess the change in number of electors across the states and Union Territories and its expenditure.
ii.To assess the change in Cost Inflation Index and its pattern of expenditure by candidates in recent elections.
iii.To get inputs and views from political parties and other stakeholders.
iv.To access the factors that affect the expenditure and other related issues.
Expenditure Limit for candidates:
i.On 19th October 2020, In the wake of COVID-19 the Ministry of Law & Justice notified the amendment in Rule 90 of Conduct of Elections Rules, 1961 and enhanced the current expenditure limit by 10% with immediate effect in ongoing elections.
ii.The limit was last revised on 28th February 2014 and for Andhra Pradesh and Telangana it was revised on 10th October 2018.
Key Points:
i.The expenditure limit was not increased in the past 6 years in spite of the increase in electorate from 834 million to 910 million in 2019 to 921 million in 2020.
ii.The cost inflation index has increased from 220 to 280 in 2019 to 301 in 2020. 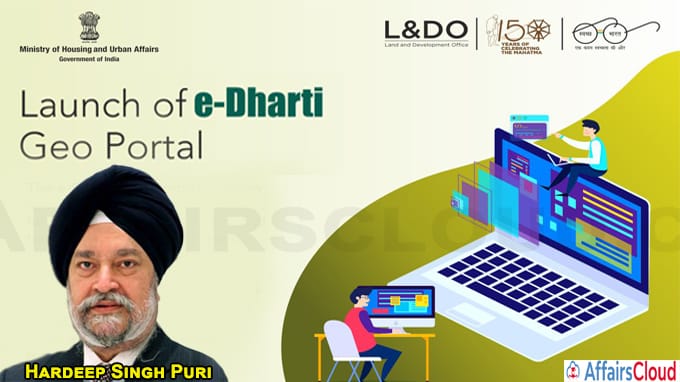 On 21st October 2020, Hardeep Singh Puri, Minister of State(MoS) (Independent Charge) of the Ministry of Housing and Urban Affairs Launched “e-Dharti Geo Portal” which will integrate the legacy drawings like maps and lease plans in Management Information System(MIS) named as e-Dharti and enable it with Geographic Information System(GIS). The Land and Development Office(L&DO) of MoHUA deals with around 60000 properties which includes commercial, residential, industrial and institutional properties.
Key People:
Durga Shanker Mishra, secretary of MoHUA, Amit Kataria, Land & Development officer and other senior officials of the ministry were present at the online launch event.
Key Points:
i.The L&DO has come up with a property certificate which contains the details and outline map of the property which will be made available on the portal.
ii.The certificate will include details such as land type, property type, date of allotment, property status, sub-type, plot area, date of execution of lease deed, property address, details about present lessee and litigation status among others.
iii.This certificate with all data can be availed by paying Rs.1000.
iv.This can be accessed by the general public through the L&DO website – http://www.ldo.gov.in/ 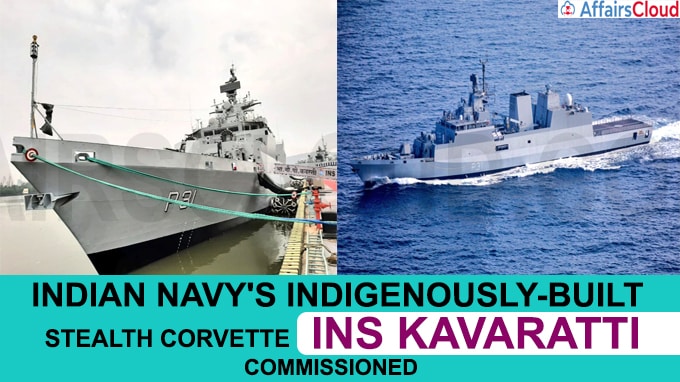 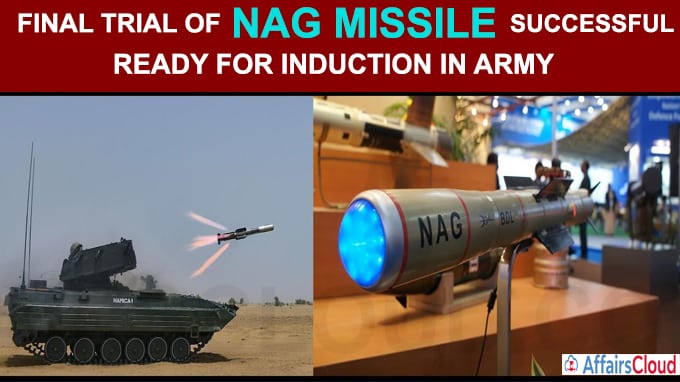 On October 22, 2020 India successfully carried out the 10th and Final User Trial of Nag Anti-Tank Guided Missile (ATGM) at Pokhran Field Firing Ranges, Rajasthan. With the successful trial, the missile is now ready for induction into the Indian Army.
The Nag missile was fired from a Nag Missile Carrier (NAMICA).
The Missile developed by Defence Research and Development Organisation (DRDO) will be essential for stopping the advance of enemy tanks.
About Defence Research and Development Organisation (DRDO):
Chairman – Dr. G. Satheesh Reddy
Headquarters – New Delhi
<<Read Full News>> 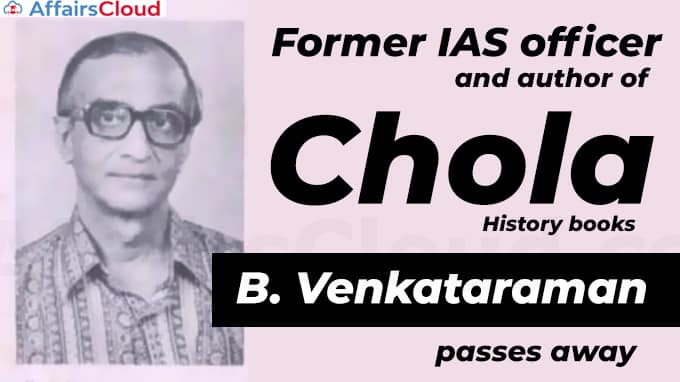 On 20th October 2020, Former Indian Administrative Service (IAS) officer and the Authority of Chola History and Architecture Dr. B Venkataraman, passed away at the age of 95 at a private hospital in Delhi.
His wife Leela Venkataraman was a renowned dance critic.
About B Venkataraman:
i.B Venkataraman was a 1950 batch IAS officer of Odisha Cadre who served as the chief secretary of Oshisha.
ii.He served as the Secretary in the Ministry of Tourism and Civil Aviation.
iii.He wrote doctoral thesis on the contributions of the Chola Queen Sembiyan Mahadevi.
iv.He renovated the Museum and Manuscripts Library at Bhubaneswar and he also renovated the structural temples like Lakhmanesvar and Bharateswar temples in Orissa.
v.He was the architect of the Puri-Konark Marine drive.
Books:
i.Along with his Father S.R. Balasubrahmanyam he co-authored the book titled “Later Chola Temples”.
ii.Some of his books include “Laddigam: A Later Chola Temples”, “Temple Art under the Chola queens” and “Rajarajeswaram-the pinnacle of Chola art” on the Brihadeeswara temple in Thanjavur. 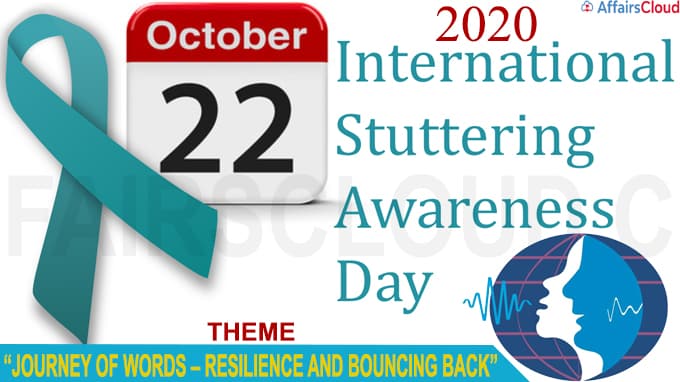 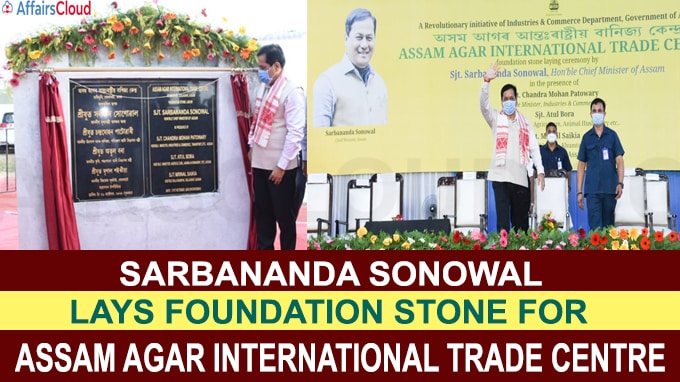 i.On October 21, 2020, the Chief Minister (CM) of Assam laid the foundation stone of Assam Agar International Trade Centre, a first-of-its-kind in India at Dabidubi in Golaghat district of Assam.
ii.This initiative is on the lines of doubling the farmer’s income in the state by 2022.
iii.This project will promote the business of the farmers as well as the entrepreneurs associated with agarwood plantation and trade in Assam which results in boosting Assam’s economy.
About Assam:
Governor– Jagadish Mukhi
UNESCO (United Nations Educational, Scientific and Cultural Organization) Sites – Kaziranga National Park, Manas National Park
<<Read Full News>> The Indian Council of Medical Research (ICMR) approved the “COVIRAP”, low cost portable COVID-19 test kit developed by the Researchers of Indian Institute of Technology (IIT)-Kharagpur. The device delivers high quality and accurate results within an hour. The device reduced the testing cost to around Rs.500 which can be further reduced by the government’s intervention. With a minimum infrastructure the cost for developing this device is around Rs.5000.

The International Monetary Fund (IMF) has slashed its Economic Forecast for Asia. The IMF expects Asia’s Economy to contract 2.2% in 2020, the decline is 0.6 of a percentage point larger than its forecast in June. The decline in economic growth is due to sharp slumps in countries like India, Philippines and Malaysia. Asia’s economy is expected to grow 6.9% in 2021 due to boost from strong recoveries in China, United States and European region.

The Indira Gandhi International (IGI) airport in Delhi operated by Delhi International Airport Ltd (DIAL), a consortium led by GMR with a score of 4.6 out of 5 has been certified as the Second Safest Aerodrome Globally for effective implementation of Coronavirus-related health and safety protocols. The safe travel score is an initiative by Safe Travel Barometer, it has assessed more than 200 airports. Singapore’s Changi Airport secured the first place with a score of 4.7 out of 5.