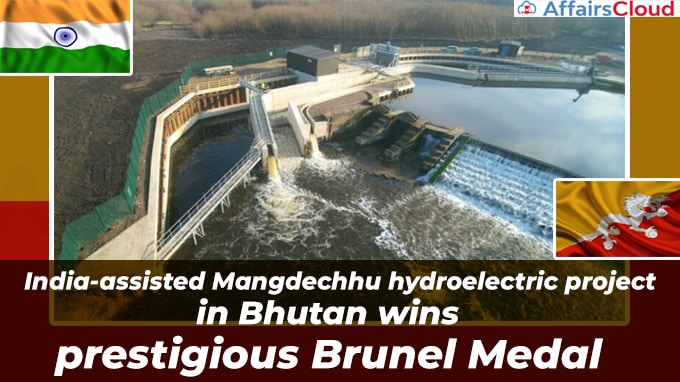 India-Assisted Mangdechhu Hydroelectric Project, a Bhutan-India Friendship project in Bhutan won the 2020 Brunel Medal for Excellence in Civil Engineering at the Annual Institution of Civil Engineers(ICE) Awards 2020 organised by the United Kingdom (UK) based ICE.

India funded the Mangdechhu power plant of cost Rs.4500 crore through a 70% loan and 30% grant.

The brunel medal is awarded to recognise the excellence in civil engineering and all teams, persons or organisations that are operating within the build environment.

Click here to know about all the winners of ICE Annual Awards 2020.

ii.Authority, which was constituted by the Government of Both India and Bhutan.

iii.The construction of the project began in 2012 and completed in 2019. The run-of-river power plant was inaugurated by Narendra Modi, Prime Minister of India on 17th August 2019.

iv.The electricity generated at the Mangdechhu plant is used to meet the energy requirements of Bhutan and the excess is exported to India.

On August 22, 2020 Water technology major Va Tech Wabag bagged the 2020 Global Water Award for its 45 million litres a day Tertiary Treatment Reverse Osmosis (TTRO) plant at Koyambedu in Chennai. The plant bagged the distinction award under the ‘Wastewater project of the year’ category. The TTRO plant in Koyambedu, Chennai is one of the largest and technologically most advanced Water Reuse Plants in India.