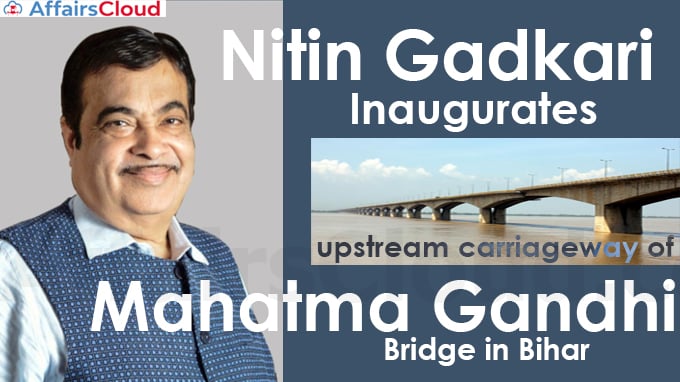 i.On July 31, 2020, as a part of the renovation of the Mahatma Gandhi Bridge/Setu over river Ganga in Bihar, Union Minister for Road Transport, Highways and MSMEs (Micro, Small & Medium Enterprises) Nitin Jairam Gadkari virtually inaugurated its upstream carriageway. This means the two lanes are completed of the 4-lane bridge which is being renovated at a cost of Rs 1,742 crore.
ii.During the inauguration ceremony, a new 5 km long, 4-lane Bridge over river Ganga in parallel to MG Setu, was also announced by Nitin Gadkari to facilitate movement of ships under it. With an outlay of Rs 2,926.42 crore, it will get completed by 2024.
About Bihar:
Capital– Patna
Governor– Phagu Chauhan
<< Read Full News >> 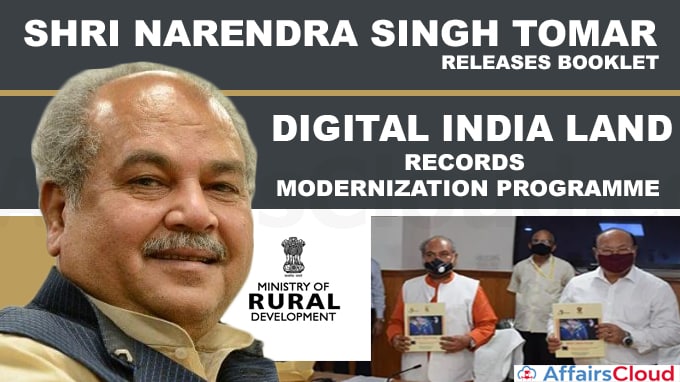 i.Narendra Singh Tomar, Union Minister of Rural Development and Panchayati Raj, released a booklet on ‘Best Practices in Digital India Land Records Modernization Programme (DILRMP)’.
ii.It is prepared by the Department of Land Resources (DoLR), Ministry of Rural Development based on the presentations made by states during regional and national workshops since inception of the programme.
iii.This book is a collection of different best practices that focus on addressing various issues, challenges, and threats to the implementation of DILRMP.
About DILRMP
The Cabinet on August 8, 2008 gave approval for the merger of the schemes, Computerisation of Land Records (CLR) & Strengthening of Revenue Administration and Updating of Land Records (SRA&ULR) into a modified Scheme named DILRMP.
<< Read Full News >> On 28th July 2020, Lord Tariq Ahmad of Wimbledon, The Minister of State for South Asia and the Commonwealth announced funding and tie up between the United Kingdom(UK) and India for five new medicinal research projects worth 8 million pounds (around Rs.78 crore) to tackle the anti-microbial resistance to support the combat against antibiotic resistant bacteria and genes during his ‘virtual visit’ to India.
About United Kingdom(UK):
Prime Minister– Alexander Boris de Pfeffel Johnson
Capital– London
Currency– Pound sterling
<< Read Full News >>

i.On 30th July 2020, The SKOCH Awards were presented over a virtual platform at the 66th SKOCH Summit at New Delhi.  The 66th SKOCH 2020 Competition was entitled as “India Responds to COVID Through Digital Governance” and the Ministry of Tribal Affairs(MoTA) participated in the “Digital India & E-Governance” 2020 competition.
ii.SKOCH Gold Award was presented to MoTA for its project of Scholarship Division – “Empowerment of Tribals through IT enabled Scholarship Schemes”.
About SKOCH:
Chairman– Sameer Kochhar
Head Office– Gurgaon, Haryana
About Ministry of Tribal Affairs:
Union Minister– Arjun Munda
Minister of State– Renuka Singh Saruta
<< Read Full News >>

India, Israel Collaborated to develop rapid testing for COVID-19 in under 30 seconds i.Experts from India and Israel have collaborated to develop rapid testing for COVID-19 in under 30 seconds by merging the technological expertise of Israel with Indian development and production capabilities.
ii.They have started to conduct trials at a special testing site at Dr Ram Manohar Lohiya (RML) Hospital on a large sample of patients for 4 different kinds of technologies namely, Voice test, Breath analyser test, Isothermal testing and Polyamino acid testing.
About Israel:
Capital– Jerusalem
Currency– Israeli Shekel
<< Read Full News >>

On July 31, 2020, German footballer Benedikt Howedes retired.He was part of the 2014 world-cup winning Germany team. He was one of the 3 players who had played every minute for the team in the tournament.
Key Points:
i.Benedikt Howedes has played 44 times for German National Team from 2011-17.
ii.In September 2007, German Football Association honored him with the Fritz Walter Medal, under-19 Gold Medal which is given to the best youth players.
iii.He has played for clubs Schalke 04,  Juventus and Lokomotiv Moscow.
iv.He played for the youth team at Schalke and then for the senior’s club from 2007-18. He spent an injury-troubled loan spell in Juventus in 2017-18.
v.The defender was last playing for Lokomotiv Moscow in Russian League and left it by mutual consent after the league was called-off due to coronavirus. On July 31, 2020, the famous writer and documentary Filmmaker Sa. Kandasamy passed away at the age 81, in Chennai, Tamil Nadu due to heart ailments. He was born in 1940, Mayiladuthurai district, Tamil Nadu. He won the Sahitya Akademi award for his Novel ‘Visaranai Commission.’
About Sa. Kandasamy
Career

His works
i.His documentary film on Kaaval deivangal by Doordarshan won the first prize at the Angino Film Festival, Nicosia, Cyprus in 1989.
ii.His work, Oru Thakkaiyin Meethu Naangu Kangal (Four eyes on a float) explains the generation gap which was later made into a short film by director Vasanth.
iii.He also shot a documentary on Prapanchan.
iv.A novel ‘Tholaindhu ponavargal’ written by him, was made into a television serial.

‘Greenlights’ the debut book authored by Oscar-winning actor Matthew McConaughey published by Crown Publishing Group is set to be released on 20th October 2020. The book was described as “not a traditional memoir but a playbook” based on the adventures and life experiences of McConaughey.
McConaughey describes ‘Greenlights’ as an album, a record and the story of his life and he shared his anecdotes, poems and life lessons in this book. 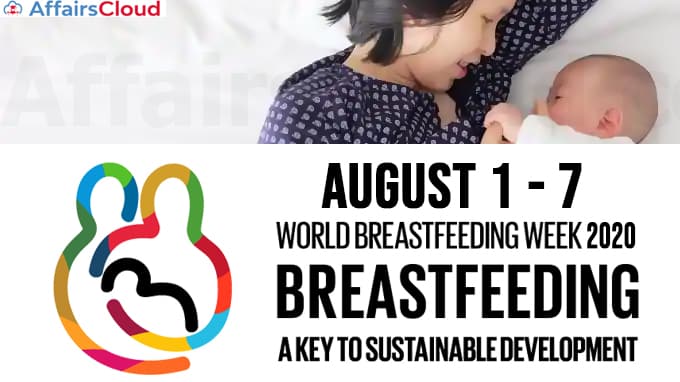 i.World Breastfeeding Week is celebrated annually in the first week of August (from 1st of August to 7th of August) around 120 countries in the World. The day is celebrated to encourage breastfeeding and improve the babies’ health around the world.
ii.The theme for the year 2020 is, “Support Breast feeding for a healthier planet”.
iii.The day commenced after signing the Innocenti Declaration in August 1990.
About WABA
Headquarters – Penang, Malaysia
Chairperson – Felicity Savage
About UNICEF
Headquarters – New York, United States
Executive Director – Henrietta H. Fore
<< Read Full News >> 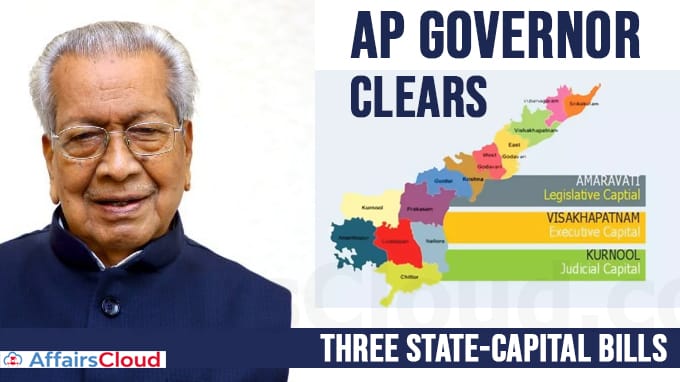 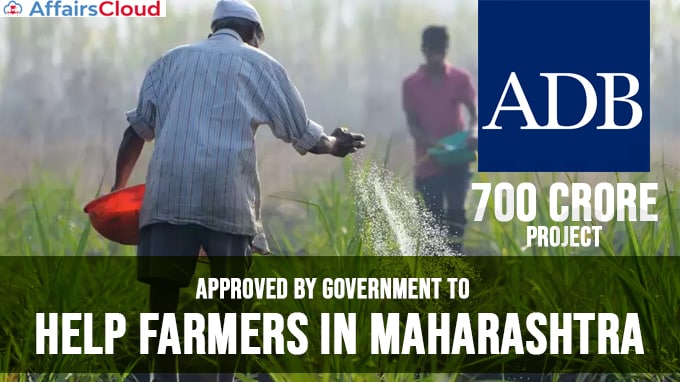 The Maharashtra government approved the Maharashtra Agribusiness Network (MagNet) project worth about Rs 1,000 crore(USD 142.9 million). The project aims to help farmers across all districts in the state for the next 6 years. This will boost the fruit and vegetable production and will improve processing and minimise the losses in the sector of perishables. 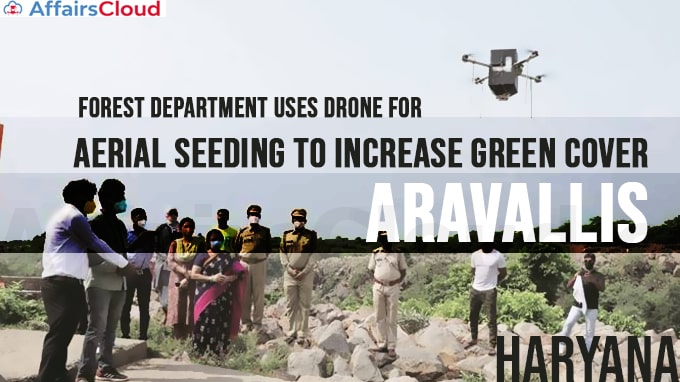 In order to improve green cover in the inaccessible Aravalli area of Haryana’s Faridabad district, the Haryana forest department has used drone technology to shower 50,000 seeds pallets covered with a mixture of clay and compost. This ‘seeding drone’ is designed by an Indian Institutes of Technology (IIT)-Kanpur backed startup.

Key Points:
-This exercise of showering seeds from drone was held between July 18-29, 2020 and covered Haryana’s four districts of Faridabad, Yamunanagar, Panchkula, and Mahendergarh.
Nearly five lakh seeds dispersed in these districts.
-The project is being taken up on a pilot basis in order to regenerate low vegetation density sites which are hard to access.
Recent Related News:
On 23rd June 2020, The Government of Haryana under the Chief Minister’s Distance Education Programme signed an agreement with Reliance Jio TV to benefit around 52 lakh rural students during the COVID-19 pandemic. In this regard, our channels of EDUSAT can be accessed for free of cost which will be available on the Jio platform.
About Haryana:
Chief Minister– Manohar Lal Khattar
Governor– Satyadev Narayan Arya
Capital– Chandigarh

Bollywood action director Parvez Khan has passed away  at the age of 55 years due to massive heart attack who is known for his work in Andhadhun, Johnny Gaddaar and Bullett Raja and also worked with Filmmaker Hansal Mehta in the National Award-winning 2013 drama “Shahid”.