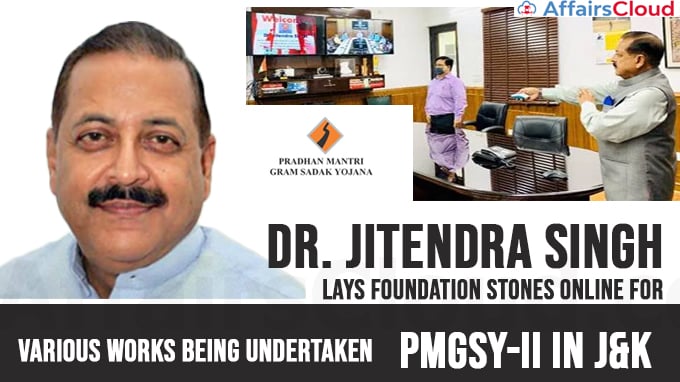 28 roads under PMGSY-II to be constructed

The project includes construction of 28 roads under PMGSY-II  in different parts of J&K(which includes the roads from Chanunta Khas to Bhuktrian Khas, Falata to Bikhan Gala, Arnas to Thakrakote, Ramnagar to Dudu, Pouni to Kund among others) at a cost of around Rs 175 crore.

Jitendra Singh informed that J&K has ranked 2nd in terms of performance under PMGSY II after Himachal Pradesh.

i.Coir Geo textiles to be used in rural road construction under PMGSY-III

About PMGSY:
Launched – 25th December, 2000 by Atal Bihari Vajpayee.
Objective– to provide all-weather access to unconnected habitations as part of a poverty reduction strategy.
Implementation– The Ministry of Rural Development and state governments

It was launched by the government in 2016 as a separate vertical under PMGSY to provide all-weather road connectivity with necessary culverts and cross-drainage structures.