We are here for you to provide the important Recent and Latest Current Affairs 19 August 2021, which have unique updates of Latest Current Affairs 2021 events from all newspapers such as The Hindu, The Economic Times, PIB, Times of India, PTI, Indian Express, Business Standard and all Government official websites. The 2nd phase of SAMVAD was launched by the Union Minister of Women and Child Development (WCD)  Smriti Zubin Irani in Bengaluru,Karnataka on the successful completion of one year of SAMVAD programme.

Objective
It aims to ensure holistic development and psychosocial well being of children and adolescents.
Highlights Highlights of the Report on CPSEs:

About the PE Survey:
i.The PE Survey is an annual survey provided by DPE. It divides CPSEs into 5 sectors viz, Agriculture; Mining & Exploration; Manufacturing, Processing & Generation; Services; and Enterprises Under Construction.
ii.DPE is the nodal agency for all CPSEs. The number of CPSEs in FY20 was increased to 366 from 348 in FY19.
iii.CPSE’s: It includes the enterprises in which the Government of India holds more than 50 percent equity. 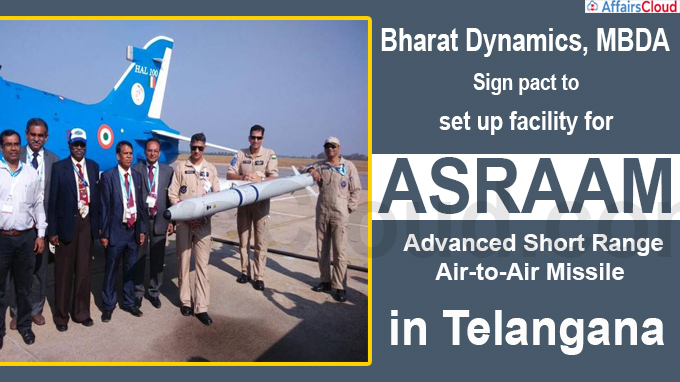 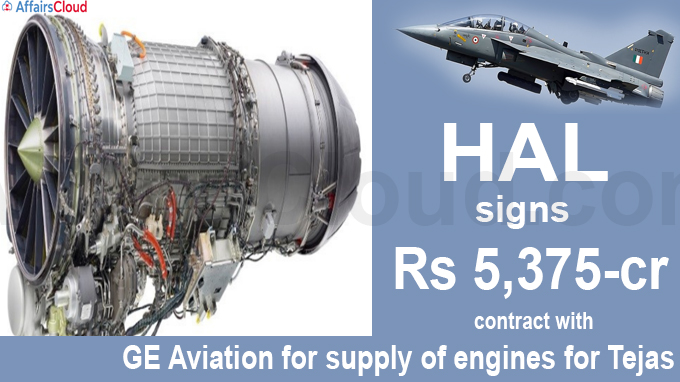 As a part of the Azadi ka Amrit Mahotsav, the 75th year of Independence of India, MyGov under the Ministry of Electronics and Information Technology(MeitY) along with the United Nations(UN) Women launched the “Amrit Mahotsav Shri Shakti Innovation Challenge 2021”.

Aim:
Nari Sashaktikaran –  to empower women to help them reach their full potential.
Objective of the challenge:
To encourage the technology solutions developed by Women Entrepreneurs to ensure women’s safety and empowerment.
Features of Amrit Mahotsav Shri Shakti Challenge 2021:
i.The Amrit Mahotsav Shri Shakti Challenge 2021 will accept the entries till 17th September 2021.
ii.The shortlisted 10 nominees will get a grant of Rs 1 lakh each, to develop the proof of concept of their idea.
iii.5 winners of the challenge will get Rs 5 lakh each, to develop market and implement their solution.
MeitY-NASSCOM Start-up Women Entrepreneur Awards 2020-21:
The winners of the MeitY-NASSCOM Women Startup Entrepreneurs Awards 2020-2021 In partnership with UN Women was announced on 17th August 2021, during the virtual event held as a part of the celebration of Azadi Ka Amrit Mahotsav.
Winners:
i.The jury members selected 12 women entrepreneurs as Winners, 2 were declared as Jury Choice Awardees and 1 was felicitated as special mention.
ii.Each Winner and Jury Choice Award were rewarded with a cash prize of Rs 2 Lakh.
iii.33 women entrepreneurs were selected for the MeitY-NASSCOM Tech Women Entrepreneur Accelerator Program.
Click here for the list of winners and Jury Choice awards & Special mention
About UN Women:
UN Women is the United Nations entity dedicated to gender equality and the empowerment of women.
Executive Director– Phumzile Mlambo-Ngcuka
Headquarters– New York City, United States of America
About Ministry of Electronics and Information Technology(MeitY):
Union Minister– Ashwini Vaishnaw (Rajya Sabha- Odisha)
Minister of State– Rajeev Chandrasekhar (Rajya Sabha- Karnataka) 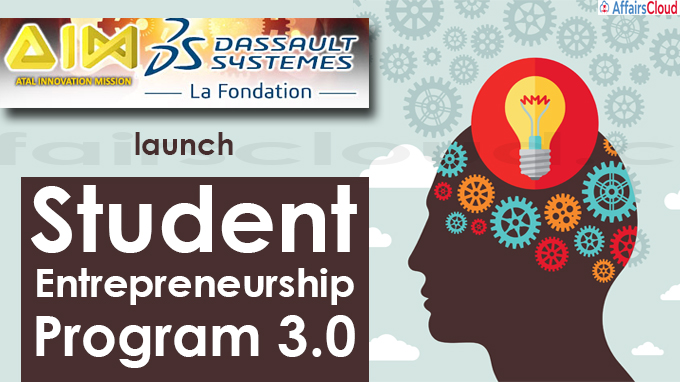 Objective- To motivate and provide support for the student to become innovators.
Student Entrepreneurship Program (SEP) 3.0-
i.A Student-Teacher(6 students and 1 teacher) team from each school will be provided funding to establish their own Start-up, preparing framework and design using 3-D printing, market campaign and create expansion strategy.
ii.After this, they will present their strategy and marketing ideas in a competition in front of experts from industry and academia.
iii.Dassault is providing mentorship, prototyping and testing support to the teams. End-User feedback, Intellectual Property Rights (IPR) registration and patenting ideas are also being provided.
iv.A total of 50 teams from 26 states are selected for SEP 3.0  Top 20 teams of ATL Marathon 2019, 10 teams selected by Dassault, 10 teams from Aspirational Districts and 10 teams from Jammu, Kashmir, Ladakh and North east regions are selected.
About Atal Innovation Mission(AIM)-it is a flagship initiative of the Government of India to promote a culture of innovation and entrepreneurship in the country
Mission Director: Dr Chintan Vaishnav
Started: 2016 On August 17, 2021, the Government announced the rates and guidelines for Remission of Duties and Taxes on Exported Products (RoDTEP), an export incentive scheme.

About Central Board of Indirect Taxes and Customs(CBIC):
It is a part of the Department of Revenue under the Ministry of Finance
Headquarters – New Delhi
Chairman – M. Ajit Kumar
>>Read Full News The Indian Institute of Technology (IIT), Madras has collaborated with the Ministry of Road Transport and Highways (MoRTH) for research in areas of pavement engineering and intelligent transportation systems. It will establish the Chair Professor as a Strategic Advisor.
Highlights

About the Programme
i.The programme will give a boost to  PhD research works in the areas selected by MoRTH. The institution will train 8-10 students including MoRTH’s nominated officers in the field of highway engineering.
ii.The chair professor will provide advisory guidance to the Highway Research Board of Indian Road Congress for better monitoring of R&D and will act as an ambassador of highway development in India.
About  Ministry of Road Transport and Highways (MoRTH)-
Minister: Nitin Jairam Gadkari (Nagpur, Maharashtra)
Minister of State: General (Retd.) Vijay Kumar Singh (Ghaziabad, Uttar Pradesh)

WHO Forms Expert Group ‘SAGO’ to study into COVID-19 origin

The World Health Organisation(WHO) created a new advisory group “The International Scientific Advisory Group for Origins of Novel Pathogens” or ‘SAGO’ to study into the origin of the COVID-19. In August 2021, the Reserve Bank of India (RBI) had removed the restriction imposed on HDFC Bank after 8 months and allowed it to issue new credit cards. However, the restrictions on the bank’s new offerings under its Digital 2.0 were not removed.

The market capitalisation(market-cap or m-cap) of the Tata Consultancy Services (TCS) has reached around Rs 13 Lakh crore on BSE. TCS became the first Information Technology(IT) company to cross the 13 lakh crore mark and the 2nd Indian company after Reliance Industries Limited (RIL) to achieve the feat. 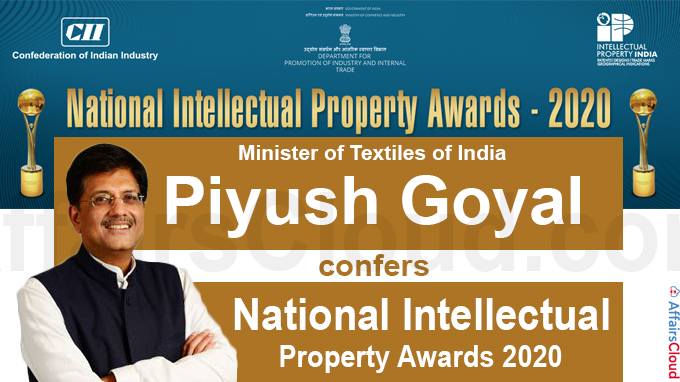 Piyush Goyal, Union Minister of Commerce and Industry(MoCI) conferred the National Intellectual Property(IP) Awards 2020 to the winners during the award ceremony held on 17th August 2021.
Click here for the list of winners and special citations

About the National IP Awards:
i.The National IP Awards, the annual awards, are conferred by the Office of Controller General of Patents, Designs and Trade Marks (CGPDTM), Department for Promotion of Industry and Internal Trade (DPIIT), Ministry of Commerce and Industry,
ii.The award recognises the top achievers(individuals, institutions, organisations, enterprises, police units and other legal entities) for IP creation, commercialization and enforcement, which has contributed to strengthening the IP Ecosystem in India.
Reduction of filing fee:
Union Minister Piyush Goyal announced the 80% reduction in the total filing fee for Intellectual Property Rights (IPRs) (from Rs 4,24,500 to Rs. 84,900) to all recognized educational institutions irrespective of whether such institute is in India or outside India.
India Recorded 572% Growth in the Grant of Patents:
i.Piyush Goyal highlighted that by granting 28,391 patents in 2020-21, India has recorded a 572% growth in the grant of patents in the last 7 years, compared to the 4227 grants in 2013-2014.
ii.He also stated that the reduction in time of patent examination from 72 months in December 2016 to 12-24 months in December 2020.
iii.The trademark registration has increased in India, there have been 14.2 lakh trademark registrations between 2016 and 2020, as compared to 11 lakh during the previous 75 years from 1940-2015.
Note:
India’s rank in the Global Innovation Index (GII) has improved to 48th in 2020 which was at 81 in 2015-2016.
The ministry aims to get India among the top 25 nations in the Global Innovation index.
About Ministry of Commerce & Industry(MoCI):
Union Minister– Piyush Goyal (Rajya Sabha- Maharashtra)
Minister of State– Som Parkash(Constituency- Hoshiarpur, Punjab) & Anupriya Patel (Constituency- Mirzapur, Uttar Pradesh) 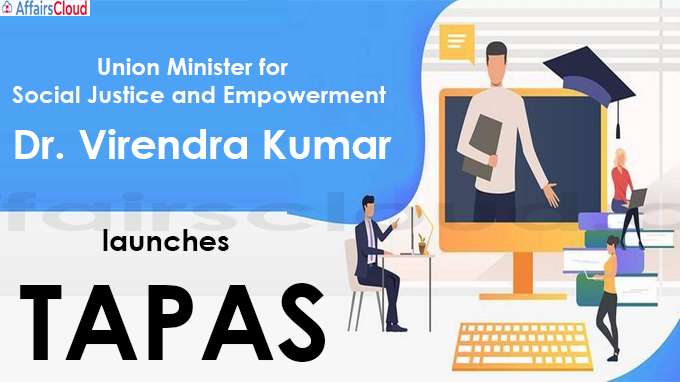 Objective of TAPAS:
To offer training and enhance the knowledge and skills for the capacity building of the participants
Training for Augmenting Productivity and Services (TAPAS):
i.The courses offered in TAPAS can be assessed by anyone at free of cost.
ii.This will enable the ministry to reach out to the people working in the area of social defence.
iii.The platform offers various courses in the field of social defence for the capacity building of stakeholders.
iv.The platform also offers 5 free courses on Drug (Substance) Abuse Prevention, Geriatric/Elderly Care, Care and Management of Dementia, Transgender Issues and Social Defence Issues.
Features:
i.TAPAS, a standard MOOC (Massive Open Online Course) platform has course material like filmed lectures and e-study material.
ii.Discussion forums to support and encourage interactions among students and course coordinators are also available in TAPAS.
About Ministry of Social Justice and Empowerment:
Union Minister– Dr Virendra Kumar (Constituency- Tikamgarh Madhya Pradesh)
Minister of State– A. Narayanaswamy (Constituency- Chitradurga, Karnataka); Ramdas Athawale (Constituency- Rajya sabha- Maharashtra) & Pratima Bhoumik (Constituency- Tripura West, Tripura)

Japan’s Maki Kaji, the Godfather of Sudoku passes away at 69 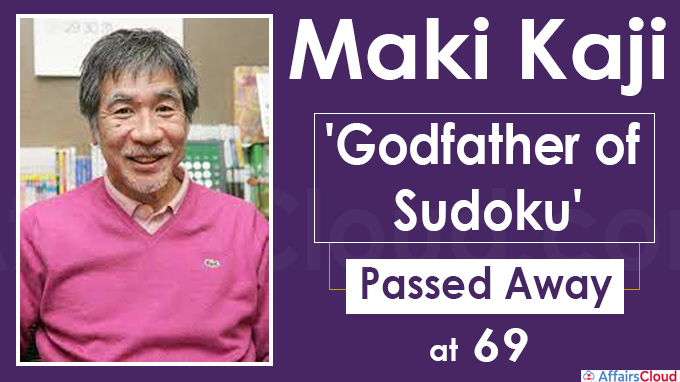 Maki Kaji (69), widely known as the Godfather of Sudoku for his role in creating one of the World’s most popular puzzles, passed away due to Bile duct cancer in Tokyo, Japan. A book titled “The Dream of Revolution: A Biography of Jayaprakash Narayan” will be launched on August 23, 2021. The book is written by the  historian Bimal Prasad and author Sujata Prasad.

The book presents a comprehensive study of JP’s life and ideas right from the initial development of his thought process. 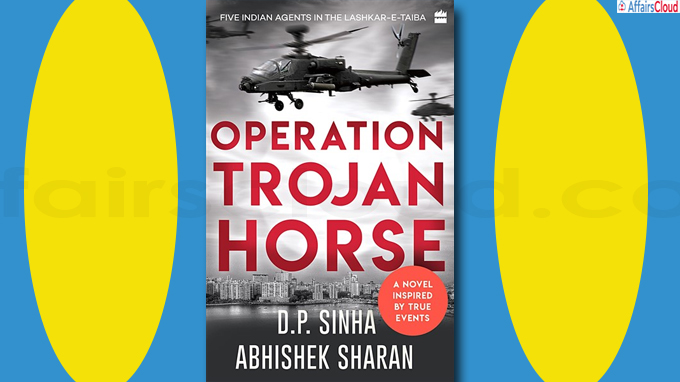 “Operation Trojan Horse: A Novel Inspired by True Events” authored by Abhishek Sharan and Divya Prakash Sinha (D.P. Sinha) is a novel inspired by various true events like the 26/11 Mumbai attacks and India’s fight against terrorism.

Operation Trojan Horse:
i.The idea of the Operation Trojan Horse is to plant the Indian soldiers in Lashkar-e-Taiba (LeT) and Pakistan terror-sponsoring infrastructures and neutralize their terror operations in India.
ii.It was the first of its kind counter-terror mission of India.
About Authors:
Abhishek Sharan, a Mumbai based independent journalist, is a senior crime journalist who has been reporting on terror attacks in India for the past 2 decades.D.P. Sinha, a former IPS officer of the 1979 batch, joined the Intelligence Bureau (IB) in 1987 and served at different ranks.