We are here for you to provide the important Recent and Latest Current Affairs 18 September 2021, which have unique updates of Latest Current Affairs 2021 events from all newspapers such as The Hindu, The Economic Times, PIB, Times of India, PTI, Indian Express, Business Standard and all Government official websites. 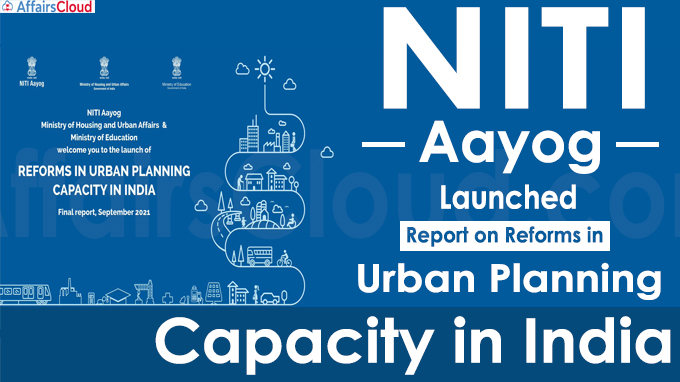 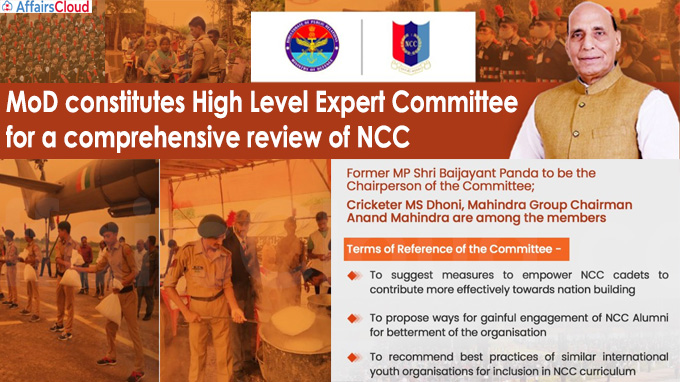 On September 16, 2021, the Ministry of Defence (MoD) constituted a High Level Expert Committee, under the chairmanship of former Member of Parliament (MP) Baijayant Panda, for a comprehensive review of National Cadet Corps (NCC). The committee will be responsible for suggesting measures to empower NCC cadets to contribute more effectively towards national development.

Composition of Committee: 15 members
It has 13 members and 1 member secretary, along with Chairperson. Therefore, in total it’s a 15 member committee. i.As part of resolution of bad loans, on September 16, 2021, the Union Cabinet approved government guarantee of up to Rs 30600 crore to back Security Receipts (SRs) for 5 years that will be issued by National Asset Reconstruction Company (NARCL). The information for the same was provided by Union Minister Nirmala Sitharaman, Ministry of Finance while briefing media in New Delhi.
ii.It has been incorporated under the Companies Act, 2013 and has applied to the Reserve Bank of India for license as an Asset Reconstruction Company (ARC). It is basically a government backed bad bank in the name of ARC.
iii.Along with NARCL, the government will also set up the India Debt Resolution Company Ltd (IDRCL). The IDRCL is a service company or an operational entity, which will manage assets and loop in market professionals and turnaround experts.  PSBs and Public FIs will hold a maximum of 49% stake and
About Ministry of Finance:
Nirmala Sitharaman Constituency– Karnataka
Ministers of State (MoS) – Dr Bhagwat Kishanrao Karad (Constituency –Maharashtra), and Pankaj Chaudhary (Constituency – Maharajganj, Uttar Pradesh)
>>Read Full News In September 2021, the Pharmacopoeia Commission for Indian Medicine & Homoeopathy (PCIM&H) under the Ministry of Ayush signed a Memorandum of Understanding (MoU) with USA’s American Herbal Pharmacopoeia to boost the export potential of Indian Traditional Medicine products in US Market.

i.Under the collaboration, a Joint Committee will be framed for developing an action plan along with development of Monographs in Traditional Medicine.
ii.A Monograph will be developed, containing technical data on Indian Traditional Medicine & Herbal products, with various Botanical Reference Samples.
iii.The Countries will work on promotion of Traditional Medicines in the international level for Global acceptance.
About Ministry of Ayush:
The Ministry of Ayurveda, Yoga and Naturopathy, Unani, Siddha and Homoeopathy (AYUSH) was established on 9th November 2014
Union Minister – Sarbananda Sonowal
Minister of State – Munjapara Mahendrabhai Kalubhai 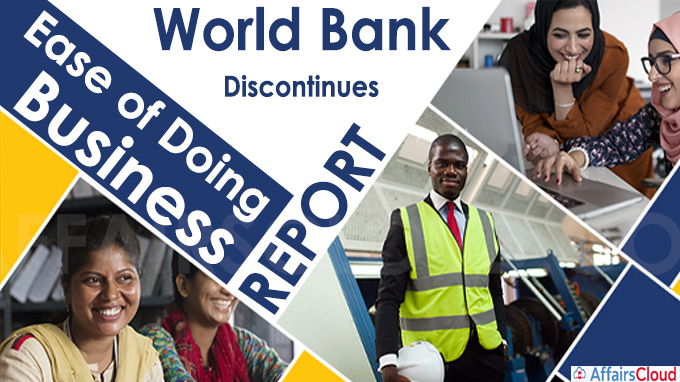 On 16th September 2021, the World Bank group announced to discontinue its “Doing Business” reports after finding data irregularities in countries rankings in 2018 and 2020 reports. The law investigation agency, WilmerHale, has unveiled inconsistent with the Doing Business methodology in the 2018 report, which favoured China’s position.

Note – The 1st edition of the ‘Doing Business’ report was published by the World Bank in 2003.
i.The investigation has unveiled that the data irregularities in the reports were due to pressure from the then World Bank Chief Executive ‘Kristalina Georgieva’, who serves as the Managing Director of the International Monetary Fund (IMF) since 2018.
ii.In the “Doing Business 2020” report, the ranking of Saudi Arabia, the United Arab Emirates and Azerbaijan were found to be dispositioned. The World Economic Forum (WEF) announced that its next annual meeting with the theme ‘Working Together, Restoring Trust’ will be held at Davos-Klosters in Switzerland from January 17-21, 2022. Kotak Mahindra Bank Limited (KMBL) and Indian Institute of Science (IISc) are collaborating to set up an Artificial Intelligence and Machine Learning (AI-ML) ‘’Kotak-IISc AI-ML Centre’’at IISc campus in Bengaluru, Karnataka.
Aim– To boost the Research & Development and innovation in the field of AI-ML.
Highlights 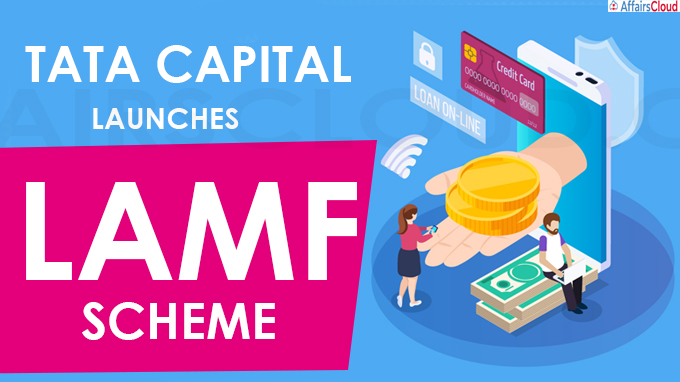 Features of LAMF:
i.Under LAMF, Tata Capital offers end-to-end digital loans starting from onboarding of customers till loan disbursement.
ii.Auto-renewal facility can be availed after the tenure of loans exceeds 1-year
iii.The loans are customizable based on the tenure and portfolio of the Mutual fund.
About Tata Capital:
MD & CEO – Rajiv Sabharwal
Established – 2007
Headquarters – Mumbai, Maharashtra 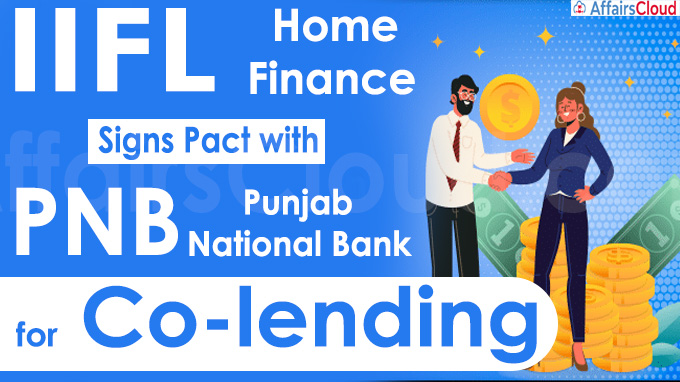 Power Finance Corporation Ltd (PFC), the leading Non-Banking Financial Company (NBFC) in the power sector, launched its first €300 million 7-year Euro Bond issuance on September 13 pricing 1.841%.
i.The issuance got participation from around 82 accounts and was oversubscribed 2.65 times by institutional investors across Asia and Europe.
ii.The pricing achieved is the lowest yield locked in by an Indian Issuer in the Euro markets. 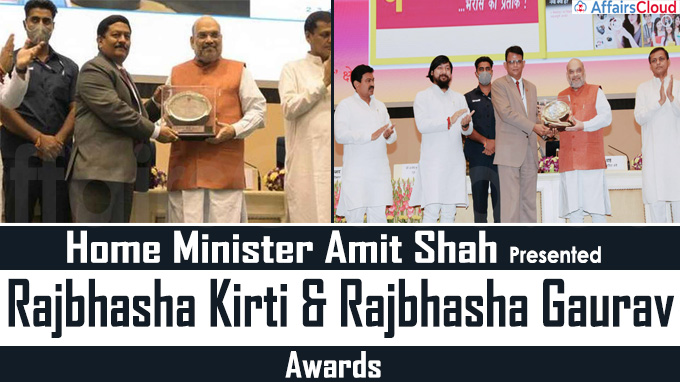 British author Susanna Clarke won the Women’s Prize for Fiction 2021 for her 2nd book, a fantasy novel titled “Piranesi”, a mystery about a man living alone in a labyrinthine house.
The book was published by Bloomsbury Publishing.
She published her debut novel “Jonathan Strange and Mr Norrell” in 2004. 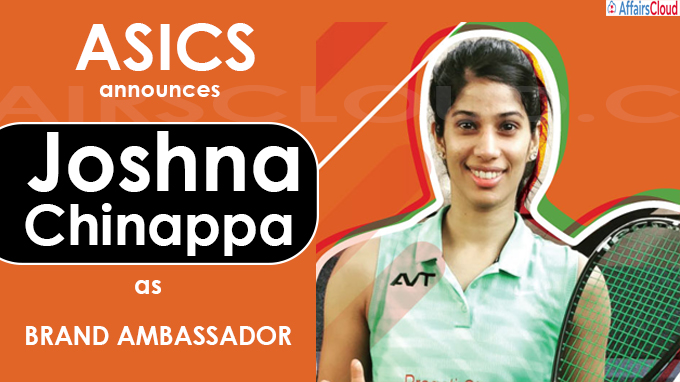 The Japanese Sports equipment company Asics announced Indian squash player Joshna Chinappa as its new brand ambassador. It will bring positive change by spreading awareness about sports among the youth.
i.Asics has been working with several other athletes from various sports such as Manika Batra, Bajrang Punia, Ravindra Jadeja, Sakshi Malik, along with international athletes like Novak Djokovic etc to support youth and improve their performances.
About Joshna Chinappa 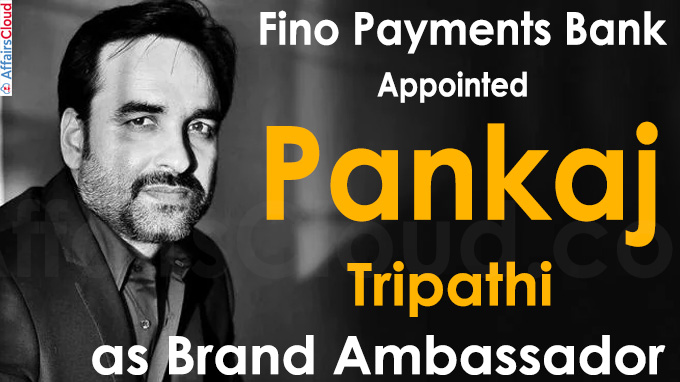 Fino Payments Bank Limited (FPBL) has appointed Indian actor(Hindi) Pankaj Tripathi as its first-ever brand ambassador. He will endorse the brand for a period of 2 years effective from September 1 2021. Objective:
The objective of the GoM is to work for the empowerment and prosperity of backward classes and minorities
Member of GoM:

Pawan Kumar Goenka, the former Managing Director (MD) of Mahindra & Mahindra, was appointed as the Chairperson of Indian National Space Promotion Authorization Centre (IN-SPACe) by the Appointments Committee of the Cabinet.

Yahoo has appointed Jim Lanzone, the CEO of Tinder as its new Chief Executive Officer(CEO) with effect from 27th September 2021.
Jim Lanzone will succeed Guru Gowrappan who was named Senior Advisor to Apollo’s private equity business. 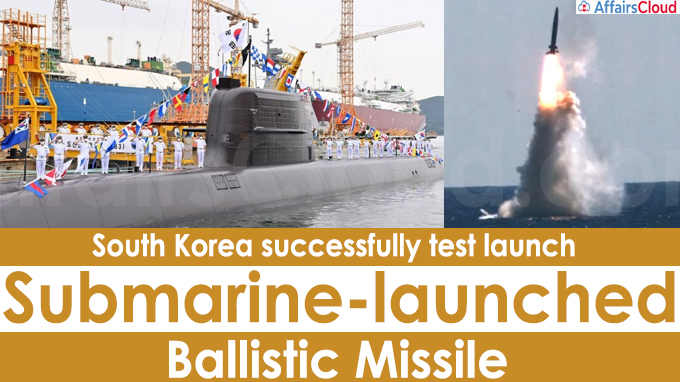 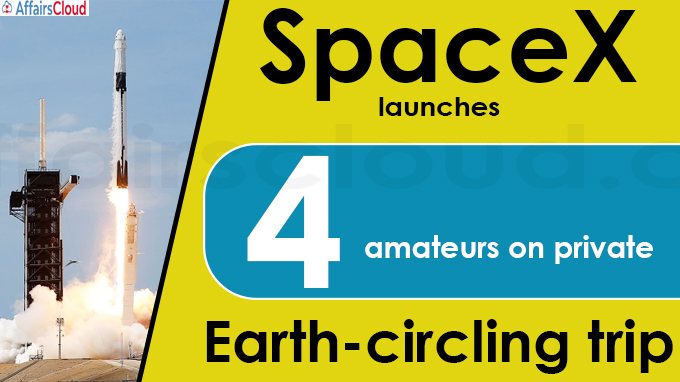 For the first, A SpaceX launched Falcon 9 rocket, with all amateur and tourist crew, from Kennedy Space Centre at Cape Canaveral in Central Florida on September 15, 2021.

Note: Arceneaux is the first youngest American in space and the first person with prosthesis, a titanium rod in her left leg
About Dragon Capsule
i.It is a class of reusable cargo spacecraft developed by SpaceX
ii.It is also known as the pressurised section, allows the transport of people as well as environmentally sensitive cargo
About SpaceX
i. Space Exploration Technologies Corp is an American aerospace manufacturer, space transportation services and communications company
ii. Founder and CEO:  Elon Musk
iii. Founded: 6 May 2002
iv. Headquarters: Hawthorne, California, United States 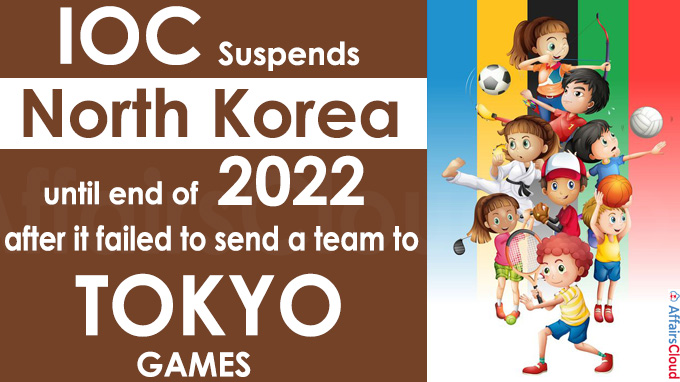 The International Olympic Committee (IOC) has suspended North Korea until the end of 2022 as it failed to send a team to the Tokyo Games.

In March 2021, He was appointed as the chairman of the Coordination Committee of the 2022 Hangzhou Asian Games by OCA General Assembly
About IOC
Headquarters: Lausanne, Switzerland
President: Thomas Bach 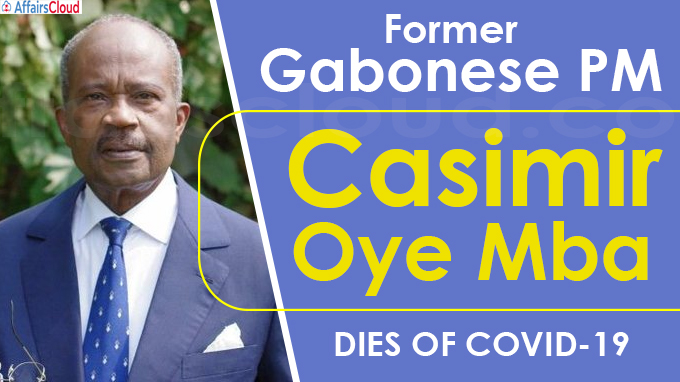 The former Prime Minister (PM) of Gabon Casimir Oye Mba passed away due to COVID-19 in Paris, France. He was 79 year old.
About  Casimir Oye Mba
i.He was born on 20 April 1942 in Nzamaligué, Gabon.
ii.Initially, he was hospitalized in Libreville,Gibbon’s capital, then transferred to hospital in Paris due to critical condition.
iii.He served as the PM from 1990-1994. He was also the Governor of the Bank of Central African States (BEAC) in Central Africa from 1978- 1990.
iv.BEAC is the common bank of six Central African countries headquartered in Yaounde, Cameroon.
v.Subsequently he remained in the government as Minister of State for Foreign Affairs from 1994 to 1999, Minister of State for Planning from 1999 to 2007, and Minister of State for Mines and Oil from 2007 to 2009. World Lymphoma Awareness Day (WLAD) is annually observed across the globe on September 15th to create awareness about Lymphoma, the cancer of the lymphatic system.
The day is observed by the patients, caregivers, healthcare professionals and others who are affected by lymphoma across the globe.
Lymphoma Awareness is represented using the lime green ribbon.
The message of WLAD 2021 is “We Can’t Wait”.
Background:
i.World Lymphoma Awareness Day (WLAD) was initiated in 2004 to raise public awareness about both Hodgkin and non-Hodgkin lymphoma in terms of symptom recognition, early diagnosis and treatment.
ii.It is a global initiative hosted by the Lymphoma Coalition, a non-profit network organisation of 83 lymphoma patient groups from 52 countries.
About Lymphoma:
i.Lymphoma is the general term for the cancer of the lymphatic system, which produces, stores, and carries white blood cells.
ii.Lymphoma develops in lymphocytes, a type of white blood cell.
iii.The lymphatic system is a part of the immune system of the body, which includes the lymph nodes (lymph glands), spleen, thymus gland, and bone marrow.
Types:
i.The two categories of lymphatic cancer Hodgkin and non-Hodgkin lymphoma are differentiated by the type of lymphocyte that is affected.
ii.Hodgkin’s lymphoma is identified by the presence of Reed-Sternberg cells, and in non-Hodgkin’s lymphoma, these cells are not present. 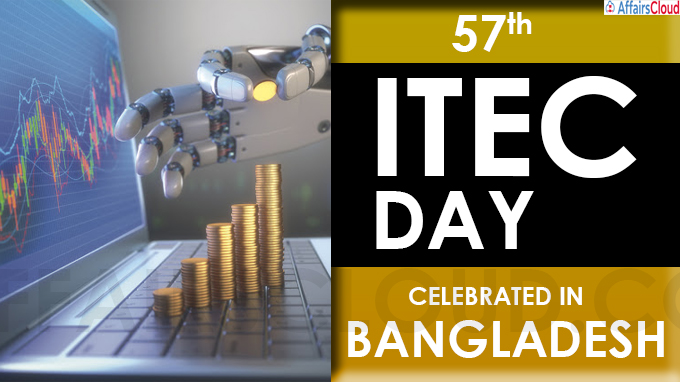 Indian Technical and Economic Cooperation (ITEC) day is annually commemorated on 15th September to mark the launch of the ITEC programme on 15th September 1964.
ITEC programme presents scholarships to deserving candidates for short-term and medium-term training courses.
About ITEC:
i.Indian Technical and Economic Cooperation (ITEC) Programme under the Ministry of External Affairs, is a flagship programme of the government of India established in 1964.
ITEC aims to offer the benefits of India’s development experiences and appropriate technologies to the other developing countries.
ii.Under ITEC, every year more than 10000 training slots are offered to 161 partner countries for training courses across various areas like Accounts, Audit, Management, SME, Rural Development and Parliamentary Affair.
ITEC Day in Bangladesh:
i.The High Commission of India in Bangladesh celebrated the 57th ITEC day in Dhaka, Bangladesh.
ii.Mohibul Hasan Chowdhoury, Deputy Minister for Education of Bangladesh attended the event as Chief guest.
ITEC Day in Thailand:
i.The Embassy of India, Bangkok organised the celebration of ITEC Day 2021 in Thailand.
ii.H.E. Suchitra Durai, Ambassador of India to Thailand presided over the events of ITEC Day 2021.
ITEC Day in Vietnam:
i.The Embassy of India, Hanoi hosted a virtual celebration to mark ITEC Day 2021.
ii.Ambassador Pranay Verma and Deputy Minister of Education and Training of Vietnam, His Excellency Nguyen Van Phuc presided over the celebrations.