We are here for you to provide the important Recent and Latest Current Affairs 15 October 2021, which have unique updates of Latest Current Affairs 2021 events from all newspapers such as The Hindu, The Economic Times, PIB, Times of India, PTI, Indian Express, Business Standard and all Government official websites. 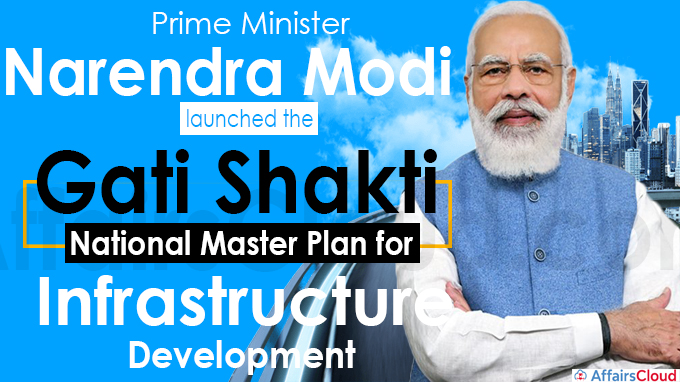 WHO releases 1st Ever Global Roadmap to Defeat Meningitis by 2030 The World Health Organization (WHO) along with its partners (including UNICEF, PATH, the Gates Foundation) have launched the 1st ever Global strategy to defeat “Meningitis”- a disease that kills hundreds of thousands of people each year.
i.The strategy “Global Roadmap to Defeat Meningitis by 2030” was launched by WHO Director-General, Dr Tedros Adhanom Ghebreyesus, during a meeting in Geneva, Switzerland.
What is Meningitis?

WHO Target – As per the current roadmap, WHO & its partners target to eliminate the Bacterial Meningitis by 2030 & reduce the overall deaths by 70%.
WHO & partners, decided on collaborative research towards vaccines for Meningitis & provide proper guidance to countries to eliminate the disease.
Meningitis as an epidemic is spread across the world, yet most prevalent in the 26 Sub-Saharan African Countries.
Roadmap for Meningitis Response & Prevention: In October 2021, Prime Minister (PM) Narendra Modi virtually participated in the ‘G20 Extraordinary Leaders’ Meeting on Afghanistan’, which has been organised to discuss the situation in Afghanistan.

Key Points:
i.Issues related to the humanitarian situation, terrorism, and human rights in Afghanistan were discussed during the meeting.
ii.PM has mentioned the support required from G20 nations for United Nations Security Council (UNSC) resolution 2593, which was adopted in August 2021 at the UNSC meeting (which was held under the Indian presidency to discuss the situation in Afghanistan).
iii.PM has mentioned the 500 development projects that have been implemented by India in Afghanistan.
iv.In September 2021, PM participated in the Shanghai Cooperation Organisation (SCO) – Collective Security Treaty Organisation (CSTO) outreach meeting on Afghanistan.

About G20:
i.The G20 is the international forum established in 1999 to bring together the world’s major economies. Its members account for more than 80 percent of world GDP, 75 percent of global trade and 60 percent of the global population.
ii.The G20 does not have a permanent secretariat, whereas its activities are established by the rotating Presidencies.
iii.G20 members: Argentina, Australia, Brazil, Canada, China, France, Germany, Japan, India, Indonesia, Italy, Mexico, Russia, South Africa, Saudi Arabia, South Korea, Turkey, the United Kingdom, the United States, and the European Union. Spain is also invited as a permanent guest. 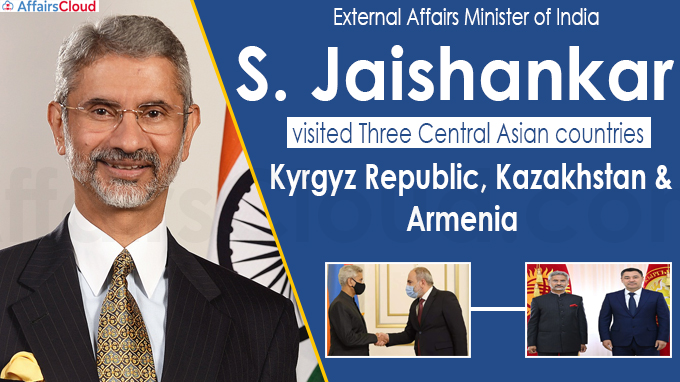 ii.Kazakhstan: The EAM visited Kazakhstan on 11-12 October and addressed the 6th Ministerial meeting of the Conference on Interaction and Confidence-Building Measures (CICA) 2021 in Nur-Sultan, Kazakhstan.
iii.Armenia: EAM visited Armenia from 12-13 October. It was the first-ever visit of an EAM of India to independent Armenia. He had meetings with his Ararat Mirzoyan, the Minister of Foreign Affairs of Armenia and also called on Nikol Pashinyan, Prime Minister of Armenia
About Kyrgyzstan:
Capital – Bishkek
President – Sadyr Japarov
Currency – Kyrgyzstani som
>>Read Full News Meenakashi Lekhi, Minister of State (MoS) for External Affairs participated in the 60th Anniversary NAM (Non-Aligned Movement) Commemorative Meeting at Belgrade, Serbia during her visit between 10-13 October 2021. She was the Special Envoy of the Prime Minister to attend the High-level Commemorative Meeting.
i.The meeting was jointly co-hosted by H.E. Alexsander Vučić, President of Serbia and NAM Chair, H.E. President Aliyev of Azerbaijan.
ii.She discussed the current developments in world peace & justice, situation in Afghanistan and emphasized the promotion of mutual sovereignty.
MoS Visit to Serbia:
i.She participated in the Meeting of Women Heads of Delegations and Ministers of Foreign Affairs, which was hosted by the President of the 76th UNGA at the UN House in Belgrade.
ii.Conducted bilateral meetings with Serbia’s Deputy PM and Minister of Agriculture, Forestry and Water Management, Minister of Defence, Minister of Culture and Information, and Minister of Trade, Tourism and Telecommunications.
iii.A bilateral Cultural Exchange Programme (CEP) was signed to strengthen cooperation in fields of Culture and Arts.
iv.MoS delivered a lecture on ‘Structure of Judiciary in India’ at the Law Faculty of the University of Belgrade.
v.She unveiled the bust of Gurudev Rabindranath Tagore in Belgrade.
About Non-Aligned Movement (NAM):
NAM was established in 1961, by like-minded countries, which decided not to support either the USA or the Soviet Union in the Cold war.
Members – 120 Member States, 17 Observer Countries & 10 Observer organizations.
Jawaharlal Nehru represented India in the first NAM conference at Belgrade in 1961.
About Serbia:
Capital – Belgrade
Currency – Dinar
Prime Minister – Ana Brnabić On October 13, 2021, digital payments firm PayPal signed a Memorandum of Understanding (MoU) with the Indian Institute of Foreign Trade (IIFT) to increase the knowledge base of Indian micro, small & medium enterprises (MSMEs).

What will IDTFF do?
i.IDTFF will educate, guide, and raise awareness amongst MSMEs about marketing, scaling, digitalization and exports through masterclasses. The digital payment platform PhonePe has partnered with National Payments Corporation of India’s (NPCI) Bharat BillPay Ltd (NBBL) and launched a unique payment link named ‘ClickPay’ to enable customers to make recurring online bill payments.
Features of ClickPay:
i.Two-step process: The recurring payment link which will be sent by the biller (on clicking the link) will lead the customer directly to the payment page for paying the bill amount instantly.
ii.This feature will facilitate the customers as it will overcome the need for remembering the unique identifiers and account details associated with making bill payments.
iii.It will also reduce the errors that are occurring due to manual inputs during bill payments.
iv.Using PhonePe the users could send and receive money, recharge mobile, data cards, pay at stores, make utility payments, make investments, buy gold, etc.
Note – In April 2021, the National Payments Corporation of India (NPCI) formed its wholly-owned subsidiary NBBL to offer recurring payment services and transferred all its Bharat Bill Payment System (BBPS) transaction mandates to it. Click here to know more
About PhonePe:
It was acquired by Flipkart acquires in 2016
Establishment – 2015
Headquarters – Bengaluru, Karnataka
CEO – Sameer Nigam 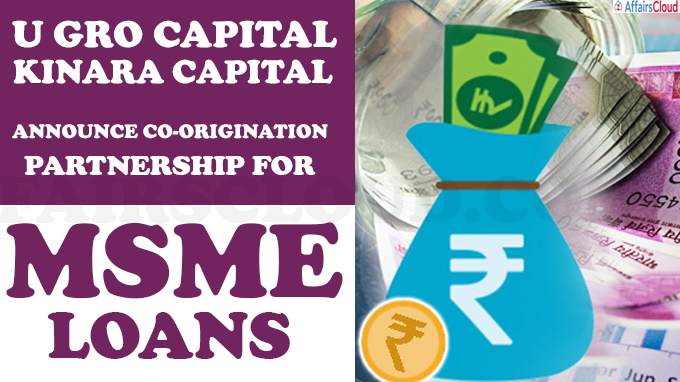 U GRO Capital and Kinara Capital have made a strategic co-origination partnership to offer collateral-free business loans to small business entrepreneurs in India.

Indian Bank and Fisdom Joined Hands for Digital Wealth Management Products
Indian Bank made a tie up with a fintech company Fisdom for its mobile banking app to manage the new digital wealth management products. 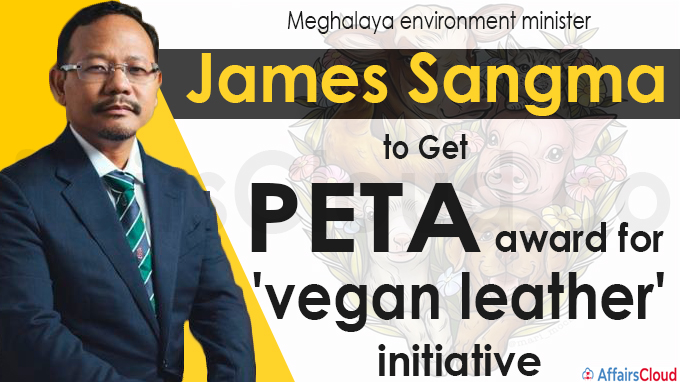 The Forest &  Environment Minister  of Meghalaya, James Pangsang Kongkal Sangma received the Progressive Business Concept Award of PETA (People for the Ethical Treatment of Animals) India 2021 for his Vegan Leather initiative. He started an initiative to make ‘Vegan Leather’ from Pineapples in the northeastern states of India.
Key points
i.The state administration is planning to build a museum to spread awareness about climate change and protection of vulnerable animals. It will be called the Climate Change Museum.
ii.According to PETA, it estimates that  animal agriculture – which includes the murder of animals for clothing  is responsible for approximately a fifth of all human-induced greenhouse gas emissions (GHG). In the 2020-21 fiscal year, India exported USD 3.68 billion in footwear, leather, and leather products.
iii.Meghalaya contributed to about 8% of total pineapples produced in India.
About Vegan Leather
Vegan leather is a material that mimics leather, but is created from artificial or plant products instead of animal skins. It is most often made from two different plastic polymers; polyurethane (PU) and polyvinyl chloride (PVC) – they are commonly used due to their wrinkled texture which helps to give the effect of real leather.
About Pineapple leather
Pineapple leather is a non-woven textile material, but it  is not made from animal skin. It is also  called Pinatex,    made from a combination of natural fibers from the pineapple leaf, and plastic and resin.
About  PETA (People for the Ethical Treatment of Animals)
Founded: 1980
Headquarters: Norfolk, Virginia, United States
President – Ingrid Newkirk On 13th October 2021, Divya Deshmukh, a 15-year-old from Nagpur, Maharashtra became the 21st Woman Grand Master (WGM) of India after qualifying in the 3rd WGM norm. She attained this feet during the “First Saturday Grand Master(GM)” in Budapest, Hungary.
i.During the tournament, she also qualified for the 2nd norms of International Masters (IM), now there is only one norm ahead for her to qualify as an IM.
Note – Subbaraman Vijayalakshmi was India’s 1st Women Grandmaster, while Viswanathan Anand became India’s 1st Grandmaster in 1988.
ii.Divya Deshmukh scored 5 points from 9 rounds during the tournament to secure the 3rd & final WGM-norm.
iii.In September 2021, R Raja Rithvik became the 70th Grandmaster of India.
About All India Chess Federation (AICF):
Founded – 1951
President – Sanjay Kapoor
Headquarters – Chennai, Tamil Nadu

Asian Football Confederation (AFC) and the Local Organising Committee (LOC) unveiled ‘Our Goal for All’ as the official tagline for the AFC Women’s Asian Cup India 2022.
Highlights
i.’Our Goal for All’ implies the unity and collective effort of the Asian football members to create a glorious future for women’s football.
ii.The AFC Women’s Asian Cup India 2022 will take place in three Indian cities of Maharashtra – Navi Mumbai, Mumbai and Pune– from January 20 to February 6 in 2022.
iii.Top 12 football teams from Asia will participate in the cup which include reigning champions Japan, 2018 runners-up Australia, third-placed China PR and hosts India. They will be joined by Indonesia, the Islamic Republic of Iran, Korea Republic, Philippines, Thailand , Vietnam and others.
About Asian Football Confederation (AFC)
President–  Shaikh Salman bin Ebrahim Al Khalifa
Founded- 1954
Headquarters- Kuala Lumpur, Malaysia Pakistani nuclear scientist and metallurgical engineer Dr. Abdul Qadeer Khan (85), also known as the father of Pakistan’s nuclear weapons program, passed away in Islamabad, Pakistan. He was born in 1936 at Bhopal, British India. World Standards Day or International Standards Day is observed on October 14 every year at the global level.  This date was chosen to mark the first meeting of delegates of IEC (International Electrotechnical Commission), ISO( International Organization for Standardization) and ITU ( International Telecommunication Union) in from 25 countries in London, United Kingdom who established an international organisation for facilitating standardisation.Objective-
To create awareness about the importance of standardisation to the world.
World Standard Day 2021 Theme-
‘’Standards for Sustainable Development Goals – Our Shared Vision for a Better World”.
About ISO (International Organization for Standardization)
Headquarters– Geneva, Switzerland
President- Eddy Njoroge
Members – 165 national standards bodies.
>>Read Full News