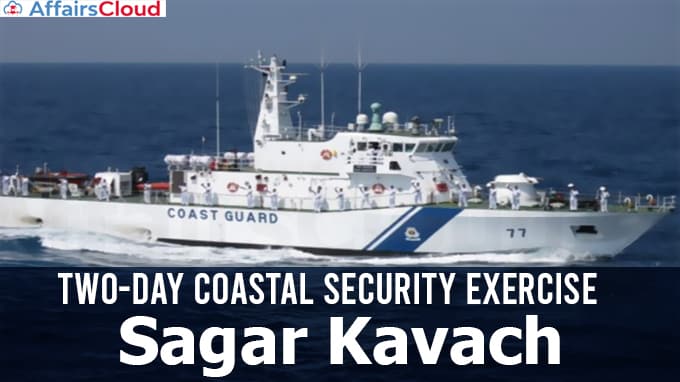 A two days long half yearly Coastal Security Exercise “Sagar Kavach” was held on October 8-9, 2020, along the coastal areas of Kerala, Karnataka and Lakshadweep to check Coastal Security mechanism and validate Standard Operating Procedures (SOPs). It assesses the preparedness of security agencies to deal with an asymmetric threat from sea.

How did Sagar Kavach take place?

During the exercise, the participants were divided in two teams, Red (attack) and Blue (defence), with the Red Force simulating as terrorists attempting attack at coastal areas of the state and Blue Force carrying out coastal security surveillance to intercept and neutralize the attempts.

i.The 6th International Military-Technical Forum “Army-2020” was held between August 23-29, 2020 at the Patriot Park near Moscow, Russia which was organized by Russian Defence Ministry and operated by International Congresses and Exhibitions Ltd. (ICE Ltd).

ii.The 11th Edition of bi-annual, bilateral Maritime Exercise INDRA NAVY – 20 between Indian Navy and Russian Navy was conducted successfully from September 4 to 5. The Exercise was conducted in Bay of Bengal, close to the Strategic point of Strait of Malacca.