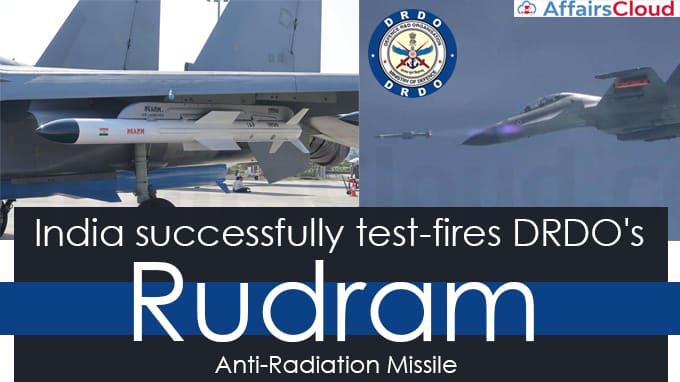 On October 9, 2020, India successfully test-fired its first indigenous anti-radiation missile, Rudram 1, a New Generation Anti-Radiation Missile (NGARM) integrated on Su-30MKI fighter aircraft of Indian Air Force. Developed by Defence Research and Development Organisation (DRDO), this air-to-surface missile was tested at the interim test range Balasore, off the coast of Odisha in the Bay of Bengal.

Range: It depends upon the height at which the fighter jet is flying. It can be launched from a height ranging from 500 metres to 15 km.
Target Range: It can hit radiation emitting targets within a range of 250 km.
Length: Approximately 5.5 meter
Weight: 140 kg

-During the test-fire, the weapon hit the radiation target with pinpoint accuracy.

-DRDO is also working on Rudra M2 and Rudra M3 projects which have been approved in 2016-17.