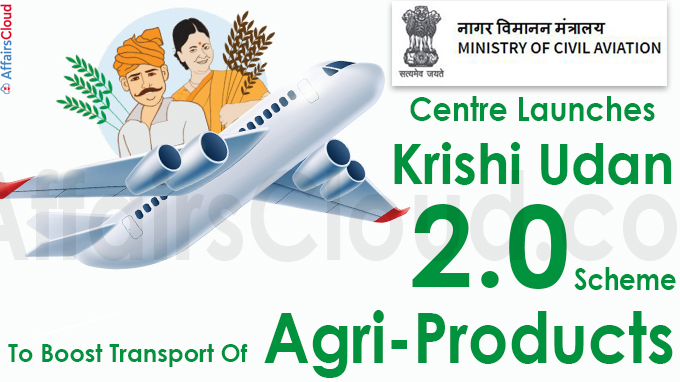 i.Opening up new ventures of growth for agriculture sectors that Facilitates and incentivizes agri-produce by air transportation.

i.Facilitates the development of hubs and creates cargo terminals at the airports in a phase-wise manner.

ii.Under Krishi Udan 2.0, the central government would also encourage states to reduce sales tax to one percent on aviation turbine fuel in aircrafts which are used for transportation  cargo.

ii.In 2022-23, the cargo terminals will be established at airports in Ahmedabad, Bhavnagar, Jharsuguda, Kozhikode, Mysore, Puducherry, Rajkot and Vijayawada.

The Ministry of Ports, Shipping and Waterways (MoPSW) and the Ministry of Civil Aviation (MoCA) signed a Memorandum of Understanding (MoU) for development of Seaplane services in India.

About Ministry of Civil Aviation