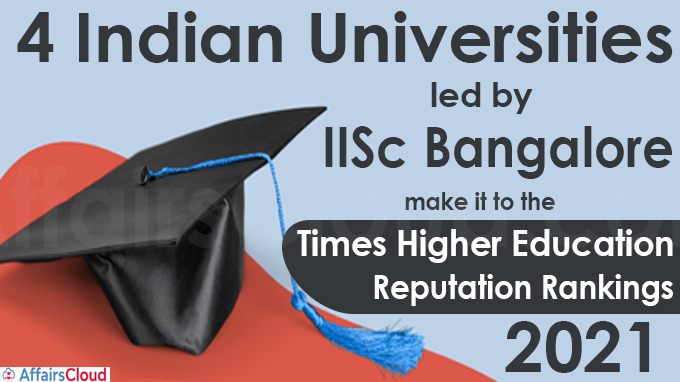 4 Indian institutes have made it to the Times Higher Education(THE)’s World Reputation Rankings 2021, the annual ranking of THE that features the top 200 universities based on the votes from leading academics across the globe.

iii.More than 10963 experienced, published academics from around 128 countries have voted for universities across the globe for their best reputation for research and teaching.

i.Harvard University of the United States of America (USA) has topped the 2021 ranking followed by Massachusetts Institute of Technology (MIT), USA and University of Oxford from the United Kingdom(UK) has secured the 2nd and 3rd rank respectively.

ii.The USA dominates the ranking with 7 institutes in the top 10.

iii.The Tsinghua University of China, ranked 10th, is the only Asian university in the top 10.

In accordance with the ‘Times Higher Education (THE) World University Rankings 2022’, 3 Indian universities made it to the top 400 global rankings.  Among them, Indian Institute of Science (IISc), Bengaluru (Karnataka) is on the top and continues to be between 301-350 cohort.

About Times Higher Education (THE):