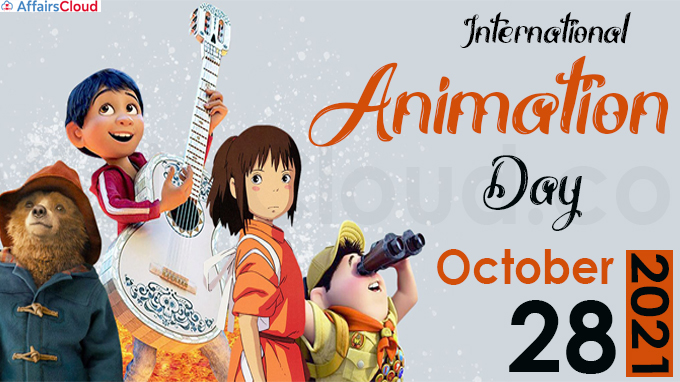 International Animation Day (IAD) is annually observed across the globe on October 28th to commemorate the first public performance of projected moving images at Reynaud’s Theatre Optique in Paris, France on 28th October 1892.

i.In 2002 the Association Internationale du Film d’Animation(ASIFA) decided to observe the 28th October of every year as the International Animation Day to mark the birth of animation.

ii.On 28th October 2021, the ASIFA India honours the foundations of arty with a special program by legendary artist Glenn Vilppu.

i.Animation is a method of photographing successive drawings, models, or puppets, to create an illusion of movement in a sequence

ii.In traditional animation, the pictures are drawn on transparent celluloid sheets and photographed. At present most of the animations are done using Computer Generated Imagery(CGI).

i.The 2021 edition of the annual ASIFA Prize was awarded to Otto Alder(Germany) at the opening ceremony of Animafest Zagreb.

ii.Instead of a statue or plaque, the recipient of the ASIFA prize will receive an artwork created by another artist.

ASIFA International is the oldest organisation globally that supports animation and a commitment to the welfare of art, creativity and the artist.
ASIFA is affiliated with UNESCO (the United Nations Educational Scientific and Cultural Organization).
President– Sayoko Kinoshita
Founded in 1960 in Annecy, France