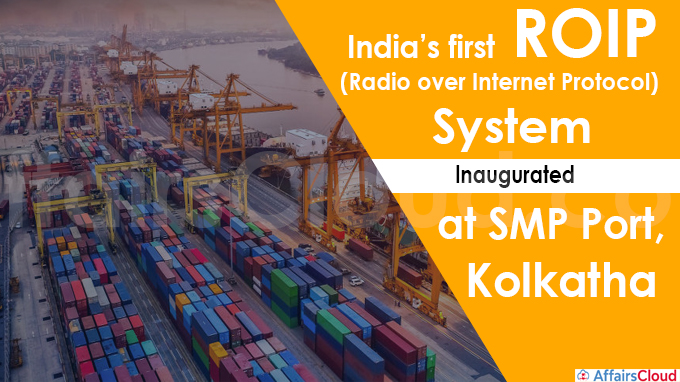 On October 26, 2021, the Radio over Internet Protocol (ROIP) System at Syama Prasad Mookerjee Port, Kolkata (SMP, Kolkata), West Bengal (WB) was inaugurated for the first time in any Major Indian Port. It is being introduced as a marine communication mode covering the entire Hugli River Estuary from Kolkata to Sandheads, having base stations at 4 Locations.

i.Under this operation, a quantity of 23,051 MT (metric ton) of cargo was transferred to the daughter vessel, MT Hampshire, in 17 hours from mother vessel, MT Yushan, with a parcel load of 44,551 MT cargo.

ii.For BPCL, this ship-to-ship lighterage operation under Haldia Dock System will save time by 7-9 days and USD 3,50,000 (approximately Rs 2.6 crore) per voyage.

On September 17, 2021, the 45th meeting of GST (Goods & Service Tax) Council was held at Lucknow, Uttar Pradesh, under the chairmanship of the Union Minister Nirmala Sitharaman, Ministry of Finance during which the validity of GST exemption on transport of goods by vessel and air from India to outside India is extended upto September 30, 2022.

It is the oldest operating port in India and was constructed by the British East India Company.
Chairman– Vinit Kumar