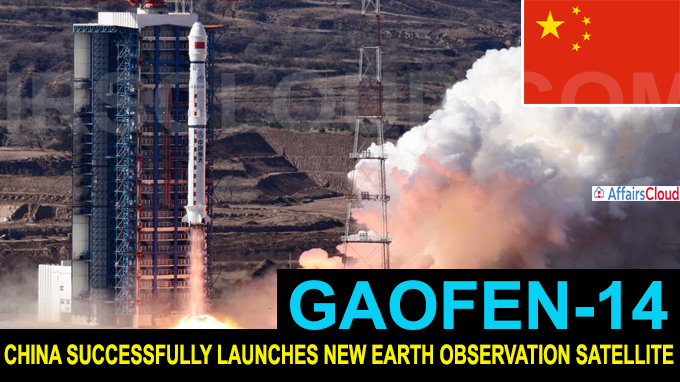 On December 6, 2020, China National Space Administration (CNSA) successfully launched Gaofen-14, a New Earth Observation Satellite from the Xichang Satellite Launch Centre (XSLC) in Southwest China’s Sichuan province. The Satellite was sent into orbit by Long March-3B/G5 Carrier Rocket.  This was the first use of the G5 version of the Long March-3B launch vehicle which features a longer fairing.

i.The launch is the 354th Flight of the Long March Carrier Rocket series.

iii.The Geographic data obtained from the satellite will be used to realize projects under the Belt & Road Initiative (BRI).

iv.The satellite will operate in the Sun-Synchronous Orbit (SSO) at 500 km altitude. This is the first time that the Long March-3B launch vehicle is being used for an SSO Launch.

i.The Gaofen project is one of the 16 major projects of China which are aimed at boosting China’s self-reliance in accessing high-resolution earth observation data.

ii.The First of the Gaofen series satellites was launched in 2013.

i.China has successfully sent 13 satellites viz. 3 Chinese and 10 customer’s satellites, into orbit through the Long March 6 rocket’s 351 flight which was lifted off from the Taiyuan Satellite Launch Center, ShanxiProvince, China.