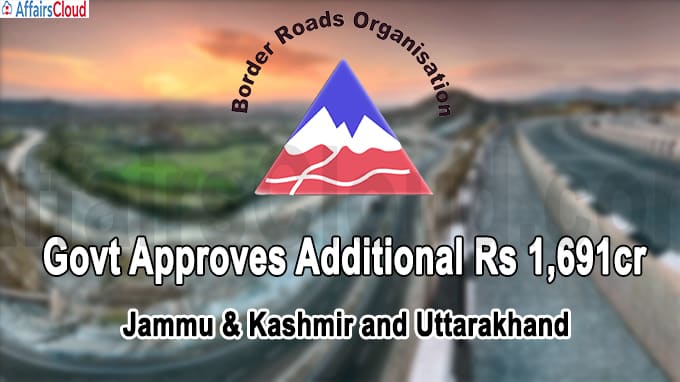 On June 28, 2020, In a major development, the central Government has sanctioned an additional Rs 1,691 crore for the construction of highways by the Border Roads Organization (BRO) in Jammu and Kashmir (J&K) and Uttarakhand during 2020-21 in the wake of clashes with China in Ladakh.

Additional Assistance:
-In addition to these, an additional Rs 71 crore has been allocated for road works in Jammu and Kashmir, Ladakh, Sikkim and Tamil Nadu under the State Public Works Department.
-It has been said in the dialogue that the limit of approval for Nagaland under Tribal Sub-Plan (TSP) has been increased from 1,081 crore to 1,955 crore.

i.The current sanction for national highways work for state PWDs (Public Works Department) was Rs 2,269 crore, which has been increased to Rs 2,340 crore. In addition, Rs 1,691 crore ceiling was approved for BRO, taking the additional ceiling of Rs 4,081 crore for national highways in these areas.

ii.The approval comes after National Highways and Infrastructure Development Corporation Limited (NHIDCL) which is working on building, maintenance and upgradation of national highways and strategic roads had announced an increase in remuneration of its personnel working in tough terrains.