On March 12, 2020, during the review meeting chaired by Cabinet Secretary Rajiv Gauba, the centre has decided to invoke Epidemic Act 1897 to ensure that multiple government advisories issued from time to time by the Ministry of Health and Family Welfare/State/UTs on COVID-19 become enforceable. In this regard, all the states and union territories (UTs) of India are advised to invoke the provisions of Section 2 of the Epidemic Disease Act 1897. Apart from this, Disaster Management (DM) Act 2005 also invocated, and powers exercised by the home secretary (Ajay Kumar Bhalla) for being the Chairman of the National Executive Committee (NEC) under section 10 of the DM Act (2005) have been delegated to the Ministry of Health and Family welfare. 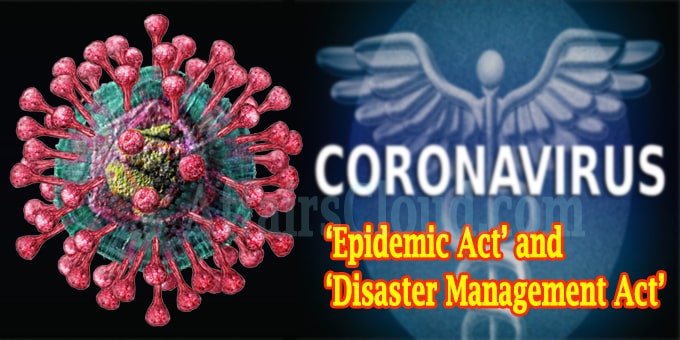 –The Act can be used to restrict the movement of suspected coronavirus patients to prevent further spread of the disease.

-The home ministry has prohibited cruise ships, crew, or passengers from coronavirus-hit nations to come to India till March 31, 2020, under the act.

The reason behind the Combined invoking of Epidemic Diseases Act, 1897& DM Act 2005:
Epidemic Diseases Act, 1897, gives the Central and State Governments overarching powers but it lacked speedily set up management systems required for a coordinated and concerted response. Therefore, the DM Act, 2005, also enacted to provide for an exhaustive administrative set up for disaster preparedness.

About Epidemic Act 1897:
The Act was formulated pre-independence to control bubonic plague which started in September 1986 in the Bombay state of former British India. Following are the official definitions of the acts