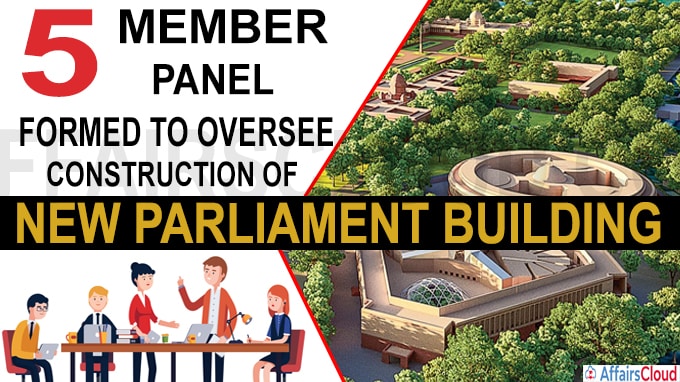 The central government has formed a 5 member committee to oversee the construction of the new Parliament house. The committee will also ensure that the design elements are followed and the heritage character of the old Parliament building is maintained.

i.The committee will comprise joint secretaries from the Lok Sabha Secretariat, CPWD(Central Public Works Department), and the Ministry of Housing and Urban Affairs(MoHUA).

ii.Along with them, there will be representation from Tata Projects and HCP.

About the New Parliament Building Project:

It is constructed under the Central Vista redevelopment project.

Estimated Cost, Consultant and Constructed by

The construction is expected to be completed by November 2022.

The committee will act as the bridge between the Lok Sabha Secretariat and private contractors.

Key Info about the New Building

ii.It will be situated at Plot No.118, New Delhi, India

iv.It has 6 separate entrances for members of the public, MPs and VIPs, including the Speaker and the vice president.

v.It house larger chambers for the Rajya Sabha and the Lok Sabha

vi.The central foyer will have a Constitution Hall that displays an original copy of the Constitution for public viewing.

vii.Near the central foyer a library will also come up. The public gallery will seat more than 336 persons.

i.Ramesh Pokhriyal ‘Nishank’ Union Minister of Education informed K. Somaprasad, Member of Parliament(MP) in Rajya Sabha, that All India Council for Technical Education (AICTE) has constituted a Committee to Prepare the Professional Engineers Bill. The committee is chaired by M.S. Ananth, Former Director of Indian Institute of Technology Madras(IIT-M).

ii.On October 14, 2020, the Central Government has formulated a panel of secretaries under cabinet secretary Rajiv Gauba to streamline telecom spectrum allocation process and examine the possibility of making the auction of spectrum an annual calendar event.