The Cabinet Committee on Economic Affairs led by the Prime Minister Shri Narendra Modi, has approved the proposal for initiation of the Third Phase of Technical Education Quality Improvement Programme (TEQIP).

National Project Implementation Unit (NPIU) was established by Ministry of Human Resource Development, Government of India, in August 1990 for coordination, facilitation, monitoring and to provide guidance to the States/ Institutions in all aspects of the projects.

TEQIP had the following Objectives : 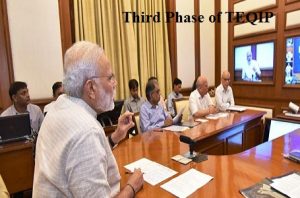 (a) Promotion of Academic Excellence;
(b) Networking of Institutions for quality enhancement and resource sharing;
(c) Enhancing quality and reach of services to Community and Economy;
(d) System Management Capacity Improvement