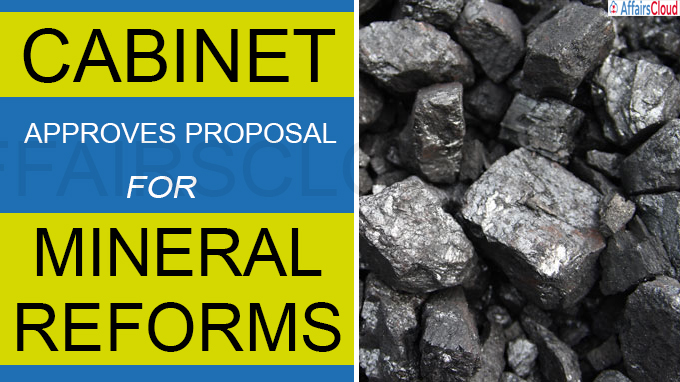 In order to boost mineral production in the country, the Union Cabinet chaired by Prime Minister Narendra Modi approved a proposal for mega mineral reforms. The major objective of the reforms is to generate huge employment opportunities, reduce imports and increase production by bringing large mineral blocks into auction.The Major reforms in mining will be implemented by amending the Mines and Mineral (Development and Regulation) Act 1957 or MMDR Act, 1957 to solve legacy issues.

What does the proposal include?

Following is the explanation of points under Proposal:

In the current scenario, royalty is included in Average Selling Price (ASP) of minerals and then again it is computed on ad valorem basis which led to double taxation. To solve this issue a panel will be formed to examine the issue of double taxation.

The reform will also see an amendment in the Indian Stamp Act, 1899 to bring uniformity in stamp duty calculation in various States.

Presently, statutory payments are calculated on the basis of Average Sale Price (ASP) which results in misinterpretation due to the absence of sale price data for some minerals, differences in prices across states, etc. Therefore, it is proposed to introduce an index-based mechanism by developing NMI for various statutory payments and others for future auctions.

It is also proposed to remove the distinction between captive and merchant mines. This will facilitate captive mines to sell up to 50% of the minerals excavated during the current year.

A 50% rebate will also be provided in the quoted revenue share, for the quantity of mineral produced and dispatched earlier than the scheduled date of production.

In order to boost exploration, there will be a review of the functioning of the National Mineral Exploration Trust (NMET). NMET will be made an autonomous body.

Approval has also been given for amendments in the DMF guidelines in order to spend DMF funds on people living in directly affected areas.

–The exploration activities in India are quite low. Out of the total Obvious Geological Potential (OGP) area of 0.571 million sq. km, only 10% of the area has been explored so far, and mining is carried out in 1.5% of the OGP area.

Under the Aatmanirbhar Bharat scheme, the Central Government in May 2020 announced enhancing private investments in the mineral sector and bringing in other reforms. In this regard, the Ministry of Mines had proposed legislative amendments to the MMDR Act, 1957.

i.On the lines of the vision of digital India and Atmanirbhar Bharat, the Central Government has given its approval for provision of a Universal Service Obligation Fund (USOF) Scheme to provide Mobile Coverage in 2374 uncovered  villages viz. 1683 in Arunachal Pradesh and 691 in two Districts of Assam namely Karbi Anglong and Dima Hasao by December, 2022.

ii.The Union Cabinet has approved the proposal of the Department of Telecommunications (DoT), Ministry of  Communications to conduct spectrum auction worth Rs. 3,92,332.70 crore (at reserve price) to offer a total of 2251.25 MHz (Megahertz) to successful bidders for providing commercial mobile services.