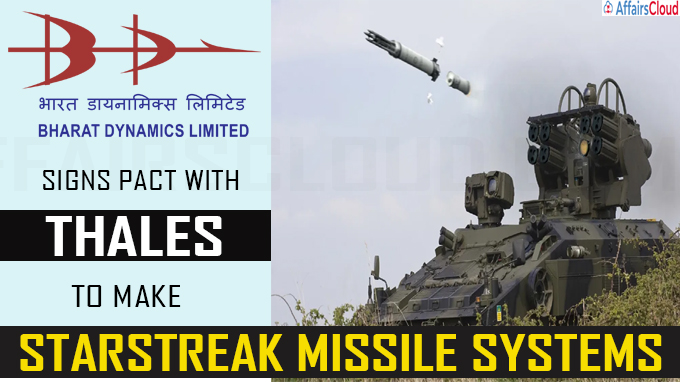 On January 13, 2021, India’s Bharat Dynamics Limited (BDL) under the Ministry of Defence and the United Kingdom’s Thales signed a ‘Teaming Agreement’ to develop STARStreak Air Defence system in India under the ‘Make in India’ programme. This partnership will be supported by both Governments.

What is the STARStreak Missile System?

–It is in service in the British Army and has been procured by defence forces worldwide.

–It is the fastest missile in its category.

–It has a unique missile system due to its three laser-guided darts, which cannot be jammed by any known countermeasure.

–It also has the capability to defeat any air target, even armoured helicopters.

Other Features of Teaming Agreement

–The agreement will provide an opportunity for BDL to manufacture 60% of the system in India that will match the immediate air defence needs of the Indian Army and Air force.

–It will also facilitate industrial cooperation between both countries for closer collaboration and co-development.

–It will enable BDL to enhance its footprints in the export market in addition to the domestic market as a new air defence system to be manufactured by the BDL will be exported to various countries, including the UK.

The government’s ‘Make in India’ programme, ‘ease of doing business’ and recent ‘Atmanirbhar Bharat’ initiatives have created a congenial ecosystem for foreign original equipment manufacturers to tie up with Indian companies like BDL to establish the production facility here.