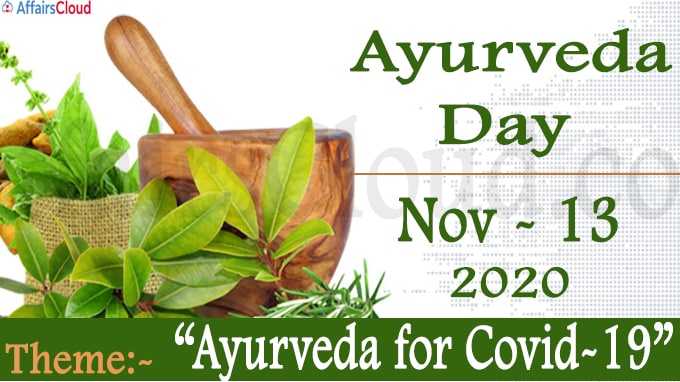 To promote the United Nations(UN)’s Sustainable Development Goal 3 – Ensure healthy lives and promote wellbeing for all at all ages.

The initiative is supported by The Ministry of Ayurveda, Yoga and Naturopathy, Unani, Siddha and Homoeopathy (AYUSH), Government of India and the Indian Council for Cultural Relations (ICCR).

In September 2016, The Ministry of AYUSH announced its decision to annually observe the Dhanvantari Jayanthi, also known as Dhanteras, as the National Ayurveda Day and the day was first celebrated in India on 28th October 2016.

i.The year 2020 marks the 5th Ayurveda Day which falls on 13th November 2020 and celebrated the Ayurveda Day 2020 under the theme – “Ayurveda for Covid-19” with a focus on the potential role of Ayurveda in the management of the COVID-19 pandemic.

i.Dhanwantri is a form of Lord Vishnu, who was considered as the god of Ayurvedic Medicine and the Physician of the Gods.

ii.The birthday of the lord Dhanwantari is celebrated as Dhanwantri Jayanti on the 13th lunar day in the month of Aswini.His birthday will be celebrated two days before Diwali every year.

To mark the celebration of the 5th Ayurveda Day, Prime Minister Narendra Modi has dedicated 2 future ready national premier Ayurveda institutions to the country over a virtual platform.

He also informed that the work is on to develop the National Sowa-Rigpa Institute for research and other studies related to Sowa-Rigpa in Leh.

About Institute of Teaching & Research in Ayurveda (ITRA):

i.Institute of Teaching & Research in Ayurveda (ITRA) is the first institute in the AYUSH Sector to have the INI status.

ii.ITRA is a forerunner in the research works in traditional medicine, which is currently conducting around 33 research projects.

iii.It was formed by the cluster of 4 Ayurveda Institutes at Gujarat Ayurveda University campus, Jamnagar.

About National Institute of Ayurveda (NIA):

i.National Institute of Ayurveda (NIA) has been contributing to promote, preserve and advance the authentic Ayurveda.

iii.With state of the art laboratory facilities, NIA has been a pioneer in research activities.

WHO is set to established a Centre for Traditional Medicine in India:

i.Tedros Adhanom Ghebreyesus, Director General of World Health Organisation(WHO) announced that WHO will set up a Global Centre for Traditional Medicine in India. He made the announcement at the event in which PM inaugurated 2 ayurveda institutions.

ii.This centre will support the endeavours of WHO to implement the WHO traditional medicine strategy 2014-2023.

Aim of the centre:

To support the countries in policy development and action plans to strengthen the role of traditional medicine in achieving the universal health coverage and to create a healthier, fairer and safer world.