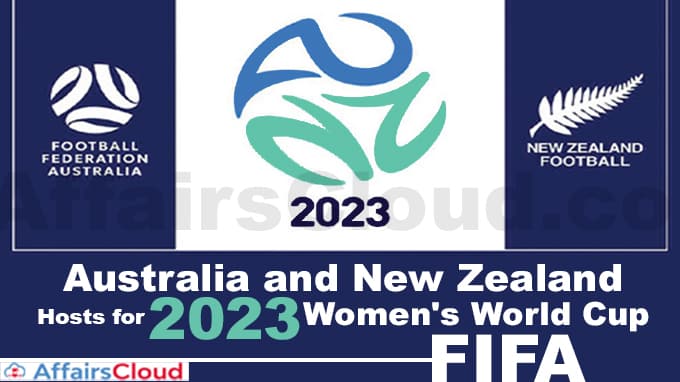 On 25th June 2020,the FIFA(Fédération Internationale de Football Association) Council voted over a video conference and handed the right to host the 2023 Women’s World Cup Football tournament, the first 32-team women’s championship to Australia and New Zealand. This is the first Women’s World Cup to be hosted in the Asia-Pacific Region.

After the audience response to the 2019 Women’s World Cup in France the FIFA President Gianni Infantino drove the campaign to increase the field teams to 32 from 24 in 2023 games.

The 2022 Men’s World Cup will take place in Qatar.

The bid of Australia and New Zealand:

i.The joint bid by Australia and NewZealand is the first of its kind from two countries and two confederations.

iii.Australia and New Zealand won the voting with 22 to 16 against Colombia.

The evaluators of FIFA noted that the countries have their infrastructures in place and their proposal was more commercially favorable.

i.The Council has approved an investment of 1 Billion USD to women’s football for the next 4 years.

ii.Similar to the Men’s World cup, the future decisions on the hosts of the event will be decided by FIFA’s member associations at its annual congress

iii.Only the bids of Australia and New Zealand, Colombia and Japan advanced to the evaluation phase.

iv.FIFA published the details of the evaluation process and the individual votes to maintain transparency in the selection process.

v.Infantino suggested conducting the tournament every 2 years instead of every 4 years.