Finance Minister Arun Jaitley inaugurated the Bandhan Bank as a full-fledged scheduled commercial bank at a function held in Kolkata’s Science City Auditorium on Sunday and on account of that India got its first private bank in 11 years. 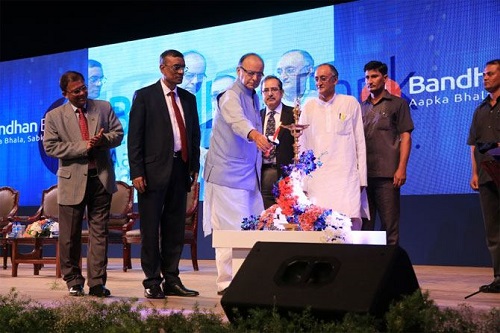 Bandhan is the first microfinance company to transform into a bank. As per RBI guidelines, Bandhan will now merge its micro-finance business with the bank. The bank will have two distinct wings – one will cater to the micro-banking segment, targeting the rural and un-banked areas and the other will look at general banking services.

The RBI licensing norms stipulate that a new bank must have a Rs 500 crore capital base. Bandhan Bank starts with a capital base of Rs 2,570 crore. Multilateral financier International Finance Corporation and the Singapore government-backed GIC are expected to invest Rs 500 crore collectively in Bandhan Bank soon, taking the net worth to Rs 3,200 crore.

Bandhan was founded in 2001 when Bandhan was operating as an NGO lending to the poor. Bandhan turned itself to a non-banking finance company in 2006.

Bandhan Bank Limited was incorporated on 23rd December 2014 as a wholly-owned subsidiary of Bandhan Financial Holdings Limited. Bandhan received the in-principal approval of the Reserve Bank of India (RBI) for setting up a universal bank in April 2014. The banking regulator gave its final nod in June 2015. Incidentally, Kolkata-headquartered Bandhan is the first bank to be set up in eastern part of India after Independence.

About the Bank Board:

Motto of the Bank: