Aqeela Asifi, an Afghan refugee who has dedicated her life to teach refugee girls in Pakistan has won the 2015 UNHCR Nansen Refugee Award. The award ceremony will be held on October 5th in Geneva. 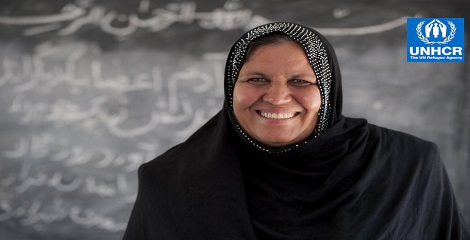 Asifi is a former teacher who fled from Kabul with her family in 1992, finding safety in the remote refugee settlement of Kot Chandana in Pakistan. Asifi was horrified by the lack of schooling for girls there. Before she arrived, strict cultural traditions kept most girls at home there but she was determined to give these girls a chance to learn. Gradually she convinced the community, and began teaching just a handful of pupils in a makeshift school tent. Today the tent school is a distant memory and over a thousand children are attending permanent schools in the village thanks to her early initiatives.

Despite minimal resources and significant cultural challenges, she has guided a thousand refugee girls through their primary education in the Kot Chandana refugee village in Mianwali, Pakistan. Asifi, a mother of six, has also worked hard to provide a solid education for her own children.

The United Nations High Commissioner for Refugees (UNHCR) was established on December 14th, 1950 by the United Nations General Assembly. UNHCR safeguards the rights and well-being of refugees and displaced or stateless people. In more than six decades, the agency has helped tens of millions of people restart their lives. UNHCR is on the front lines of the world’s major humanitarian crises, including Syria, Iraq, Central African Republic, Afghanistan, South Sudan, Democratic Republic of the Congo, and countless other emergencies.

According to UNHCR, there are around 1.5-million documented Afghan refugees in Pakistan, nearly half of them school-aged children. But approximately 80 percent of the refugee children currently are out of school. So such initiatives definitely need to be appreciated and promoted.