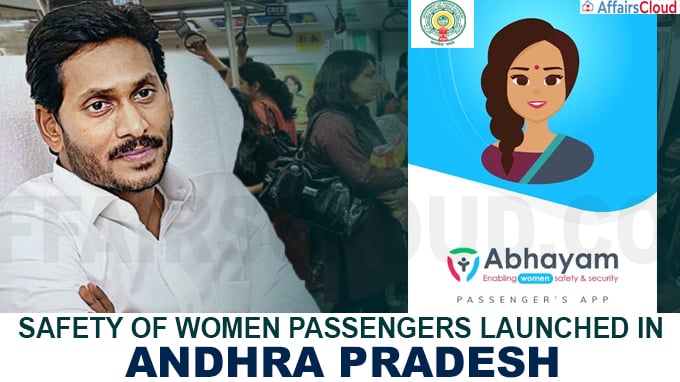 On November 23, 2020 Andhra Pradesh Chief Minister (CM) Jagan Mohan Reddy virtually launched the ‘Abhayam App’ for the safety of women travelling by Auto & Taxis. The app will help women to raise an alarm in case of any emergency.

i.This is the First Internet of  Things (IoT) based women safety project.

ii.The app was launched as part of the First Phase of the Abhayam Project.

During the First Phase 1000 auto rickshaws equipped with GPS (Global Positioning System)/Internet of Things (IoT) devices have been linked to the Abhayam app in Visakhapatnam.

The project has been sanctioned by the Central Government under the Nirbhaya Scheme.

i.The App will be operated by the Transport Department.

ii.In Case of any emergency during travel, woman passengers can alert the police by pressing the panic button in the application.  Police will track the vehicle using GPS and reach them in 10 minutes.

iv.In order to facilitate the tracking of the vehicle, the passenger needs to scan the QR Code on the vehicle.

v.Passengers not having access to smartphones can use the panic button installed on the vehicle to inform the Command Control Centre. This will stop the vehicle immediately and alert the nearest police station.

Monitoring the behaviour of the Driver:

Using the App, the Command Control Centre can monitor the behaviour of the Driver.

ii.It will also cover the cities of Vijayawada and Tirupathi in the later phase of the project.