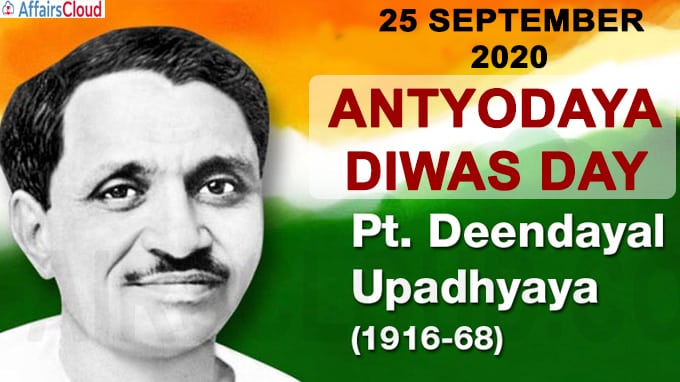 Antyodaya Diwas is annually observed across India on 25th September to mark the birth anniversary of Pandit Deen Dayal Upadhyaya, an icon of Bharatiya Jana Sangh and Bharatiya Janata Party(BJP), philosopher of nationalist movements of India and political activist.

“Antyodaya” means ‘uplifting the poorest of the poor’, the objective of Antyodaya Diwas is to reach out to the last person.

i.Deen Dayal Upadhyaya Grameen Kaushalya Yojana(DDU-GKY) was announced on 25th September 2014 as a part of the NRLM with two objectives,

i.As a part of the commemoration of Antyodaya Diwas 2020, MoRD is celebrating the foundation day of Deen Dayal Upadhyaya Grameen Kaushalya Yojana(DDU-GKY) with a program “Kaushal Se Kal Badlenge”, along with the beneficiaries and other stakeholders of the scheme across India.

iii.The MoRD organised the virtual celebration of this day with the states and Union Territories(UTs), Project Implementation Agencies, Employers and youths of the rural region across India.

About Ministry of Rural Development(MoRD):