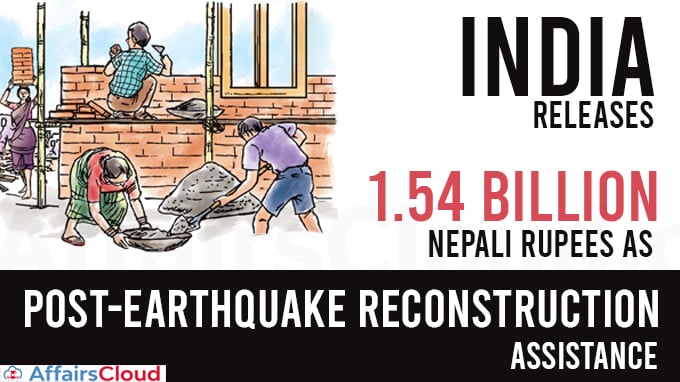 The Nepal earthquake of 2015 also known as “Gorkha earthquake” had severely affected thousands of lives as well as the economy. At that time, India being the Nepal’s immediate neighbour, was the first to respond with Operation Maitri which provided rescue and relief by its armed forces and also announced a post-earthquake reconstruction package of US$ 1 billion (which comprises US$ 250 million grant and US$ 750 million concessional Line of Credit).

–India has committed US$ 150 million in grant and Line of Credit towards housing sector projects supported by the Government of India.

–With this recent handover, India has reimbursed about US$72 million from grant to the Government of Nepal for housing sector reconstruction. Notably, out of Government of India’s commitment to rebuild 50,000 houses in Gorkha and Nuwakot districts, 92% of the houses have been completed.

–Similarly, Indian Government has committed support for reconstruction of 70 schools and 1 library under US$ 50 million grant assistance. Out of this, the first tranche of USD 4.2 million for ongoing schools was reimbursed to Nepal.

i.The Embassy of India and the Central Level Project Implementation Unit (CLPIU) of the Ministry of Education, Nepal signed 7 Memorandums of Understanding (MoUs) for re-building 56 higher secondary schools. Included areas in the MOU for the reconstruction of schools are located in Gorkha, Nuwakot, Dhading, Dolakha, Kavrepalanchowk, Ramechhap and Sindhupalchowk districts of Nepal.

ii.World Bank in its latest edition of the Global Economic Prospect (GEP) released in June 2020 projected a decline in Nepal’s growth to 1.8% due to exports and a drop in tourism (China and India contribute to one-third of the tourism sector).