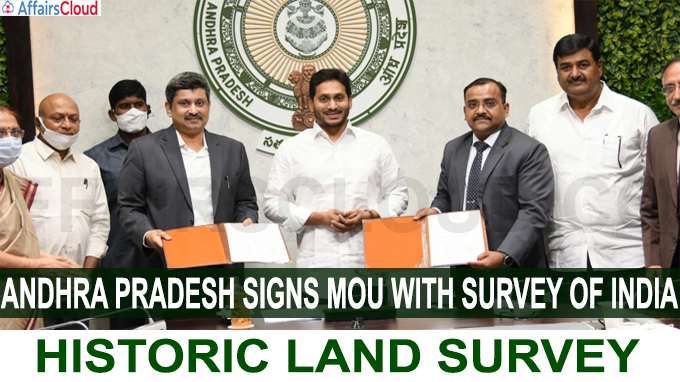 On December 9, 2020 Andhra Pradesh (AP) Government and Survey of India (SoI) signed a Memorandum of Understanding (MoU) for the implementation of ‘YSR Jagananna Saswath Bhoo Hakku-Bhoo Raksha Pathakam’ – a land resurvey project in Andhra Pradesh. This is the 1st time in 100 years that such a survey is being conducted in India.  The Survey will be launched on December 21, 2020.

ii.The project is estimated to cost about INR 1, 000 Crore.

iii.The Survey will be conducted in 3 phases and will take place from December 2021-January 2023.

ii.The measurements will be measured accurately with a minimum error rate of 2 cms.

iii.Latest Technologies like CARS (Computerized Automotive Recording System) Technology, drones and rovers will be used for the survey.

iv.AP will establish mobile tribunals to resolve land disputes on the spot.

v.After the survey, the Government will demarcate boundaries, and will issue passbooks to landowners.

Chief Minister, Jagan Mohan Reddy announced the setting up of a Land Titling Authority after the signing of the MoU between the two entities.

Benefits due of Land Survey:

i.A Land Titling Card will be prepared to be distributed for the people after the survey

ii.The Land Titling Card would have a unique identification number, measurements of the property, name of the owner along with the photo, and ownership.

A Digital Cadastral Map (showing extent, value, and ownership of land, taxation) will be prepared after the completion of the survey. The Map will bear all details of lands in the village.

Registration of sub-divisions and Distribution:

The survey will help in registration of sub-divisions and distribution at field level which have not been registered in the last 100 years.

i.Permanent land title to the owners will be provided 2 years after the finalisation.

ii.After the survey, Digitization of property registers, registry for complaints will be made available at the village secretariat level.

Infrastructure for the Survey:

In order to implement the survey, the SoI and AP government will set up 70 base stations.

ii.Each Mandal or Unit will consist of 1 Drone team, data processing team and a resurvey team.

iii.Around 9, 400 Surveyors have been provided training by SoI for conducting the survey.

A Training Institute will be established in Tirupati for training people in surveying.

ii.On 17th July 2020, The State Government of Andhra Pradesh(AP) announced the Andhra Pradesh Renewable Energy Export Policy 2020, which permits the sale of power to the other states of India.

About Survey of India:

Survey of India is a Department under the Ministry of Science & Technology, Government of India