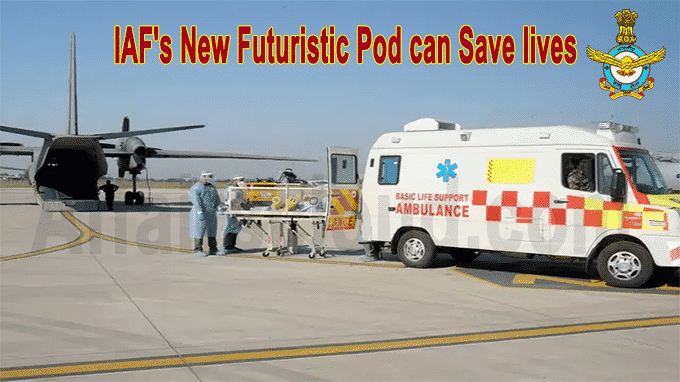 ARPIT (Airborne Rescue Pod for Isolated Transportation) was designed, developed and inducted by the Indian Airforce (IAF) for the evacuation of critical patients with infectious diseases from high altitude area, isolated and remote places.

The design requirements are developed on the guidelines issued by the Ministry of Health and Family Welfare (MoHFW), National Accreditation Board for Hospitals and Healthcare Providers (NABH) and Centre for Disease Control (CDC), USA. The IAF is inducting a total of 7 ARPITs.

Note: The first prototype was developed at 3 BRD AF and has undergone various modifications.

To support the “Atma Nirbhar Bharat” call of Prime Minister Modi, only aboriginal materials have been used to fabricate this pod, the designed system has been developed at a cost of Rs 60,000 only, which is low when compared to imported systems costing up to Rs 60 Lakhs.

Why the Pod was developed?

With COVID-19 declared a pandemic there was a requirement of an air evacuation system with the facility to prevent the spread of infectious aerosol from a COVID-19 patient during air travel.

ii.It has a transparent and durable cast Perspex for enhanced patient visibility which is larger, higher and wider than the existing models.

The Indian Air Force was officially established on 8 October 1932 an auxiliary air force to the British empire. In 1947 after the Independence the from the British, The name “Royal Indian Air force” was regained as the title. After India became a Republic in January 1950, the Indian Air Force dropped the prefix “Royal’’ and since then is known as “The Indian Airforce”.
Chief of Air Staff- Rakesh Kumar Singh Bhadauria