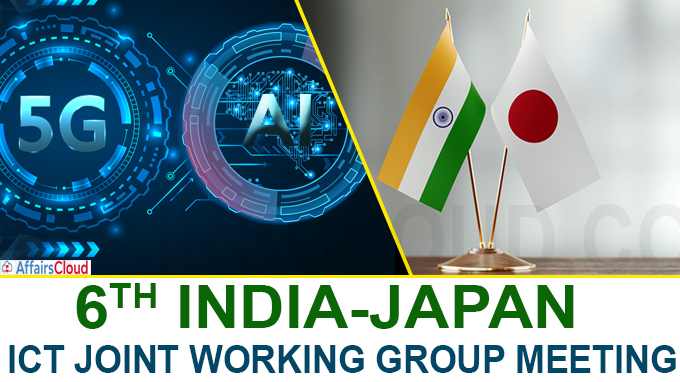 On December 8, 2020, The 6th Meeting of Joint Working Group under the India-Japan ICT (Information & Communications Technology) was held virtually. Cooperation in 5G technologies, medical applications of Artificial Intelligence (AI) were some of the key issues discussed during the meeting. The meeting was inaugurated by Anshu Prakash, Secretary, Telecom, Ministry of Communication, India.

i.The virtual meeting was held through VC Solution, a web platform developed by India’s C-DOT (Centre for Development of Telematics).

ii.The India-Japan Joint Working Group on ICT was established in 2014 as part of the Japan-India ICT Comprehensive Cooperation Framework.

ii.The Indian side was represented by K Ramchand, Advisor (Technology) from the Department of Telecommunication and Anshu Prakash, Secretary (Telecom), Department of Ministry of Communication, India.

ii.They also undertook a collaborative project at the Asian Institute of Gastroenterology in Hyderabad, the project involves the use of AI by Software to assist doctors in Colonoscopy diagnosis.

iii.The participants stated that ICT is an important tool to take forward the vision for a free, open and inclusive Indo-Pacific of the two countries.

In October, 2020 During the External Affairs Minister Jaishankar’s visit to Japan, both countries finalized the text of Cybersecurity pact which is expected to promote the Cooperation in sectors such as 5G, Internet of Things (IoT), Artificial Intelligence (AI).

ii.The committee will consist of members from Telecom companies such as Huawei, Ericsson, Nokia. Qualcomm Technologies Inc will have members for industry 4.0, smart grid and education.