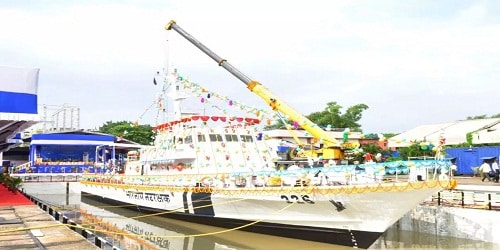 Key points
i. The ship is the last series of the five FPVs built by GRSE.
ii. It is to be Commissioned as Kanaklata Barua, named after a freedom fighter from Assam.
iii. The first ship of FPV class is ICGS (Indian Coast Guard Ship) Priyadarshini that was commissioned on March 27, 2019.

Basic features of the ship:
i. Its length is 50m and its breadth is 7.5m with displacement of 308 tonnes.
ii. They have a maximum speed of 34knots (1 knot= 1.15miles per hour) enduring more than 1500 nautical miles.
iii. The latest FPV series is an improvised version of Inshore Patrol Vessels built by GRSE in 2013. They are well suited for patrolling, anti-smuggling, anti-poaching and rescue operations.

Engine and navigation:
i. The main engines have advanced control system and water jet units.
ii. It has an integrated bridge system which takes in and understands fully about the communication and navigation systems.
iii. It can accommodate 35 personnel, key armament of 40/60 gun and improved habitability features with full air condition.

GRSE productions:
i. GRSE has so far built frigates, missile Corvettes, anti-submarine warfare Corvettes and landing craft utility ships for the Indian Navy.
ii. It can produce 20 ships concurrently by its enhanced shipping capacity and is the only shipyard to deliver over 100 warships.
iii. GRSE  also works for the engineering and business areas and builds ‘bailey type bridges’, ‘deck machinery for ships’ and diesel engines for marine applications.
iv. It has received orders of over Rs.27,500 crore.

About GRSE
♦ The company was nationalized in the year 1960 and was awarded Mini Ratna status on September 2006.
♦ Headquarters- Kolkata, India.
♦ Founded- 1884.
♦ Chairman and CEO- Rear Admiral VK Saxena, IN(retd).