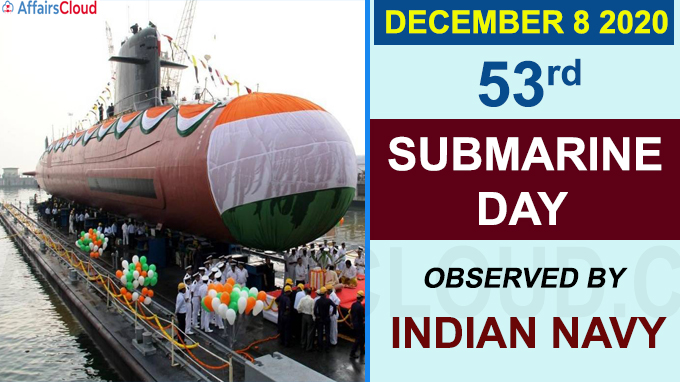 Indian Navy annually observes the Submarine Day on 8th December to remember and honour the submarines and martyrs of Indian Navy who lost their lives to serve the nation.Indian Navy observed 53rd Submarine Day in the year 2020.

The day marks the birth of the Submarine Arm of Indian navy and commemorates the induction of the first submarine, Indian Naval Ship(INS) Kalvari, a foxtrot class submarine, into the Indian Navy in 1967.

The maiden unfurling of the naval ensign of Indian Navy on the INS Kalvari took place in 1967 at erstwhile Soviet Union naval base Riga, Latvia.

After serving for around 29 years, INS Kalvari was decommissioned on 31st May 1996.

i.Indian Navy released a video showcasing the efforts made by Indian Submariners from the sea over the years.

ii.The video features the monitoring activities in the sea, launching rockets and missiles, and even destroying enemy vessels in hair-raising visuals.

i.Western Naval Command(WNC) of the Indian Navy observed the 53rd Submarine Day, at the memorial of INS Vajrabahu at Naval Dockyard, Mumbai, Maharashtra.

i.The submarine fraternity observes and celebrates the Submarine day with a series of events coordinated by the INS Virbahu and INS Satavahana, under the aegis of Submarine Headquarters(SMHQ).

i.INS Virbahu was commissioned in May 1971 by then Defence minister Jagjivan Ram.

ii.INS Virbahu which means “The Heroic Arm” is regarded as the “Home of the Dolphins”.