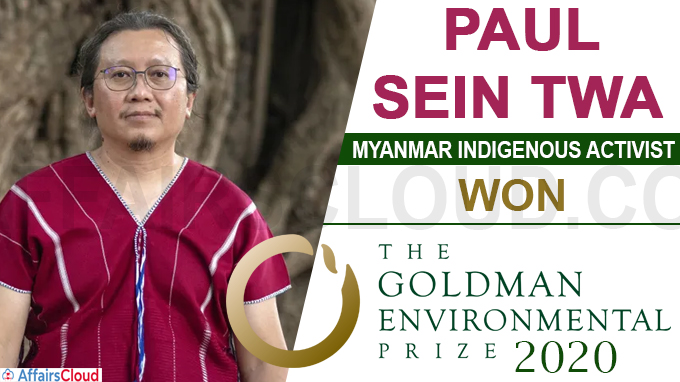 Following is the list of winners of 2020 Goldman Environmental Prize:

In December 2018 Paul Sein Twa led his people in establishing a 1.35-million-acre peace park as an approach of conservation in the Salween River basin.

He was recognized for his four-year grassroots campaign to stop the construction of a 700-megawatt (MW) coal power plant and adjoining shipping port to import coal in Ghana.

The coal power plant would have been Ghana’s first but his deeds wante nation’s energy future away from coal.

She was awarded for convincing the government of The Bahamas to ban single-use plastic bags, plastic cutlery, straws, and Styrofoam containers and cups.  In this regard, the nationwide ban went into effect in January 2020.

In 2017, France’s three largest banks eliminated financing for new coal projects and coal companies due to her activism, then, between 2017-2019 mega French insurers AXA and SCOR ended the insurance coverage for coal projects.

She led an indigenous campaign and legal action that resulted in a court ruling protecting 500,000 acres of Amazonian rainforest and Waorani territory from oil extraction.

It is the world’s first and largest award honoring grassroots environmental activists founded by Richard N. Goldman and Rhoda H. Goldman in San Francisco.The prize provides the winner international recognition and connection with other grassroots leaders along with Financial support to pursue their vision.