The 63rd Annual Regular Session of the International Atomic Energy Agency (IAEA) General Conference was held in Vienna, the capital of Austria with participation from 171 IAEA member states from September 16-20, 2019. The conference is conducted to jointly discuss about the issues related to the IAEA’s work, budget and priorities. 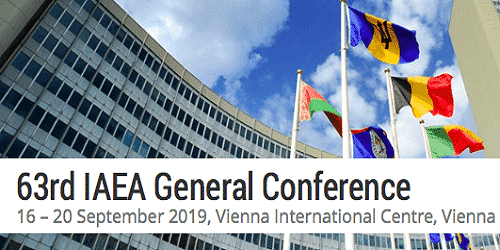 Key points
i. Indian Delegation: The Indian delegation to the conference was led by Dr. K N Vyas, Chairman of the Atomic Energy Commission(AEC) and Secretary of the Department of Atomic Energy(DEA). Vyas talked about various achievements made by the Indian government that formed part of support in the IAEA’s growth.
ii. NCG Vishwam Cancer Care Connect: The National Cancer Grid- Vishwam Cancer Care Connect (NCG-Vishwam 3C), which is a global cancer care network, was launched by Vyas in Vienna.  The NCG-Vishwam’s key work is to integrate hospitals and relevant cancer care institutes from partner countries with the National Cancer Grid (NCG) of India.

iii. Future plans: India currently has 21 power generation reactors under construction and planning, and has plans for nuclear power capacity additions in these reactors of capacity 15,000 MWe.
iv. 11 new members of IAEA Board of Governors: 11 new countries have been elected to serve the 35 member IAEA Board of Governors for the year 2019-2020. The 11 countries are Estonia, Ghana, Greece, Hungary, Kuwait, Mongolia, Nigeria, Norway, Panama, Paraguay, and Saudi Arabia.