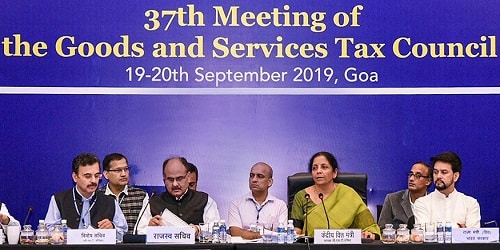 Exemptions from GST/ IGST
The following was exempted from GST/  Integrated Goods and Services Tax (IGST):

Measures for Export Promotion
Exemption was given from GST/IGST:
i. At the time of import on Silver/Platinum by specified nominated agencies.
ii. Supply of Silver/Platinum by specified nominated agency to exporters for exports of Jewellery.
iii. Inclusion of Diamond India Limited (DIL) in the list of nominated agencies eligible for IGST exemption on imports of Gold/ Silver/Platinum so as to supply at Nil GST to Jewellery exporters.
iv. A uniform GST rate of 12% on Polypropylene/Polyethylene Woven and Non- Woven Bags and sacks, whether or not laminated, of a kind used for packing of goods (from present rates of 5%/12%/18%).

Rate reduction sector wise:
Hospitality and tourism:
i. Reduced rate of GST on hotel accommodation service is as follows:

ii. The GST rate on outdoor catering services other than in premises having daily tariff of unit of accommodation of Rs 7501 was reduced from present 18% with ITC to 5% without ITC.  It is made mandatory for all kinds of catering.
iii. Catering in premises with daily tariff of unit of accommodation is Rs 7501 and above will remain at 18% with ITC.

Transportation
The validity of conditional exemption of GST on export freight by air or sea was increased by another year, i.e. till 30.09.2020.

Recommendations related to laws & procedures
The council recommended the following Law & Procedure related changes :
i. Relaxation was given for filing the annual returns for Micro, Small & Medium Enterprises (MSMEs) for FY 2017-18 and FY 2018-19 as under:

ii. A Committee of Officers will be formed to examine the simplification of Forms for Annual Return and reconciliation statement.
iii. Extension of last date for filing of appeals against the orders of Appellate Authority before the GST Appellate Tribunal as the Appellate Tribunals are yet not functional.
iv. In order to nudge taxpayers to timely file their statement of outward supplies, imposition of restrictions on availment of input tax credit by the recipients in cases where details of outward supplies are not furnished by the suppliers in the statement under section 37 of the CGST Act, 2017.
v. New return system will be introduced from April, 2020 (earlier proposed from October, 2019), in order to give ample opportunity to taxpayers and the system to adapt and accordingly specifying the due date for furnishing of return in FORM GSTR-3B and details of outward supplies in FORM GSTR-1 for the period October, 2019 – March, 2020.
vi. Issuance of circulars for uniformity in application of law across all jurisdictions:

vii. Rescinding of Circular No.105/24/2019-GST dated 28.06.2019, from the beginning,which was issued in respect of post-sales discount.
viii. Suitable amendments in CGST Act, UTGST Act, and the corresponding SGST Acts in view of creation of Union territories of Jammu & Kashmir and Ladakh.
ix. Integrated refund system with disbursal by single authority to be introduced from 24th September, 2019.
x. In principle decision to link Aadhaar with registration of taxpayers under GST and examine the possibility of making Aadhar mandatory for claiming refunds.
xi. In principle decision to prescribe reasonable restrictions on passing of credit by risky taxpayers including risky new taxpayers.