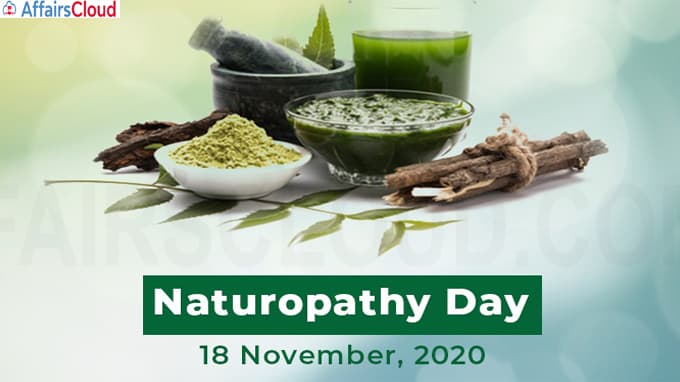 The theme of the 3rd Naturopathy Day 2020 is “Nurturing Vitality Through Naturopathy”. During 2020 celebration, three-day long programme was organized at the Nisargopchar ashram in Urli Kanchan in collaboration with National Institute of Naturopathy in Pune.

i.The National Institute of Naturopathy (NIN), Pune has organised a series of live sessions over the social media platform(Facebook) from 2nd October 2020, birth anniversary of Mahatma Gandhi to 18th November 2020.

ii.The live sessions were aimed to promote the principle of Naturopathy among the general public.

iii.NIN is set to release a book titled “Gandhi the Healer” which is a collection of multiple works published by Gandhi.

iv.The ebook format of “Gandhi the Healer” will be available for free download in the NIN Website.

v.As a part of the 3rd Naturopathy Day celebration, the Central Council for Research in Yoga and Naturopathy (CCRYN) organised various events from 17th to 18th November 2020.

vi.Shripad Yesso Naik, Union Minister of AYUSH, participated in the inaugural programme of the 3rd naturopathy day 2020 that started on 17th November 2020.

i.Naturopathy is a rational and evidence based system of treatment with natural elements.

ii.It is based on the Theory of Vitality, Theory of Toxemia, Theory of Self Healing Capacity of the body and the principles of healthy living.

About Ministry of (AYUSH):