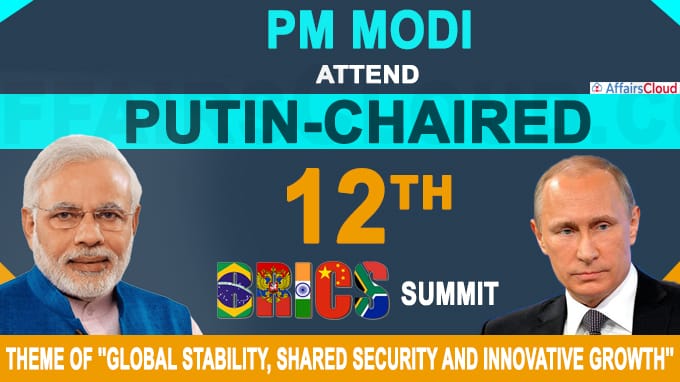 The 12th BRICS (Brazil-Russia-India-China-South Africa) Summit 2020 held virtually on November 17, 2020 which was attended by heads of state of the five member states. The summit was hosted by Vladimir Putin, President of Russia on the theme “Global Stability, Shared Security and Innovative Growth” where India was represented by Prime Minister (PM) Narendra Modi

During the summit, discussions were held on intra-BRICS cooperation and on global key issues including the reform of the multilateral system, measures to mitigate the impact of the ongoing COVID-19 pandemic, cooperation in counter-terrorism, trade, health, energy and people to people exchanges.

–In 2021, BRICS will complete 15 years therefore ‘sherpas’ can make a report to evaluate the various decisions taken by BRICS in the past years.

–Terrorism is the biggest problem facing the world today.

–India’s vaccine production and delivery capacity will work in the interest of humanity to tackle the COVID crisis.

–There is a need for reforms of the UN Security Council and organisations like World Trade Organisation (WTO), the International Monetary Fund (IMF) and the World Health Organisation (WHO)

–BRICS Business Council can make a plan to take the mutual business among the member nations to the target of USD 500 billion.

India is taking over the chairship of the BRICS, which would also be its third BRICS Presidency since its inception. India held the BRICS Chairship in 2012 and 2016. Therefore, it will be hosting the 13th BRICS Summit in 2021.

The five-nation grouping BRICS has adopted a new BRICS counter-terrorism cooperation strategy to effectively deal with terrorism.  The objective of the strategy is to strengthen the existing bilateral and multilateral ties among the BRICS countries for combating terrorism.

Goals for the BRICS Counter-Terrorism Strategy:

– BRICS countries will strengthen their unity in countering international terrorism and its financing;

– Deepen their cooperation to reaffirm the support for the central and coordinating role of the UN in combating international terrorism;

– Improve the practical cooperation among security and law-enforcement authorities to prevent and combat terrorism;

–  Facilitate research and development on measures to counter terrorism;

Click here to read more about the Principles and goal of the Counter Terrorism Strategy.

– XII BRICS Summit’s Moscow Declaration stressed the importance of the United Nations but focused much of its attention to fighting the Covid-19 virus.

– The XII Brics Moscow declaration said that the five member states would work to ensure that, once a vaccine becomes available, “it is disseminated on a fair, equitable and affordable basis.

Click here to read more about the Moscow declaration

The BRICS represents over 3.6 billion people, or half of the world”s population. The BRICS countries have a combined GDP of USD 16.6 trillion.