On December 29, 2019 according to an analysis of the data shared by Minister for Women and Child Development (MoWCD) Smriti Irani in the Parliament, merely 30% of the Poshan Abhiyan funds have been used in 3 years. Apart from Mizoram, Lakshadweep, Himachal Pradesh and Bihar, none of the state govt has used the fund granted to them in the past 3 years. The data in detail are as follows, 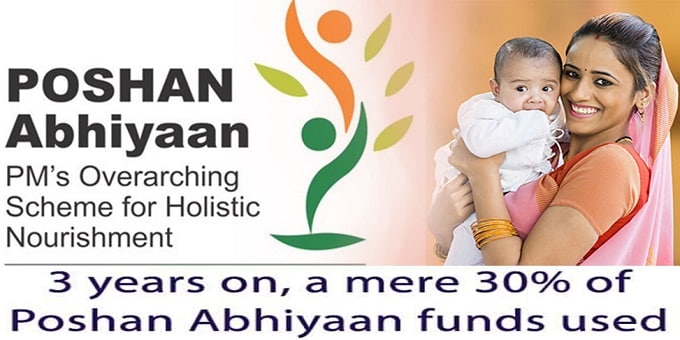 v.Various activities were launched over the years to enhance Poshan Abhiyam. Some of them include Integrated Child Development Services-Common Application Software (ICDS-CAS) to monitor anganwadis etc.

vi.CNNS data: Comprehensive National Nutrition Survey (CNNS) by the Ministry of Health and Family Welfare (MoHFW) in October 2019, showed that 35% of children below the age of 5 years were stunted, 17% were wasted(low weight for height) and 33% were underweight(low weight for age)

Aim: Poshan abhiyaan is the centre’s flagship programme which is aimed at improving nutritional benefits to pregnant women, lactating mothers and children by reducing the level of stunting, underweight, anaemia and low birth weight. It has also set an aim to achieve the above targets by 2022.

Launch: The scheme was launched in the year 2017 under Prime Minister Narendra Modi’s govt.

Budget: A total budget of ₹9,046.17 crore was allocated for three years, 50% of which is through budgetary support, that is further divided in the ratio 60:40 between the Centre and the States. For Northeastern & Himalayan states, the ratio is 90:10 while it is 100% for union territories(UTs) without legislature. The scheme has been meant to support more than 10 crore people in the country.