On December 7, 2019, The central government has agreed to include three airports one each at Jeypore in Koraput, Rourkela in Sundergarh & Utkela in Kalahandi district of Odisha under the regional connectivity scheme UDAN (Ude Desh ka Aam Naagrik).
The decision was taken in a meeting between Civil Aviation Secretary Pradeep Singh Kharola and Odishas Chief Secretary A K Tripathy at the state secretariat. 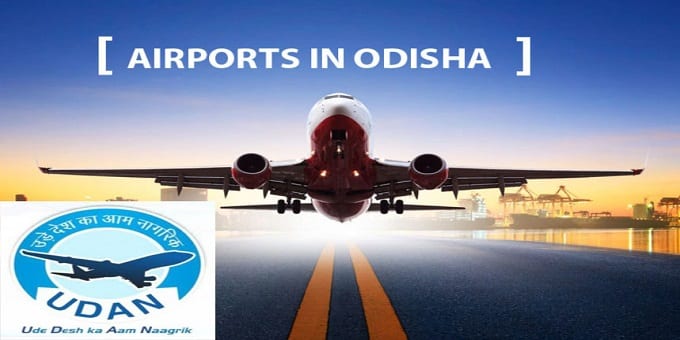 i.These 3 airports will be developed under UDAN-4.0. This would help in improving connectivity to remote areas of the state.

ii.It is noteworthy that Vir Surendra Sai (VSS)Airport of Jharsuguda was included in the UDAN-3 scheme.This year(2019), the airport started flying between the 6 cities of the country. The Center has approved Rs 160 crore for the development of these airports at Jharsuguda, Jeypore, Utkela and Rourkela.

UDAN scheme :
It was launched on 27 April 2017 by the Prime Minister (PM) Narendra Modi-led government with the goal of making air travel accessible to the common people of the country.

i.There has been an increase in the VGFs (Viability Gap Funding) available to airline companies. The funding that was provided for Category 2 and 3 aircrafts (> 20 seats) has now been enhanced to all flights in the states of Himachal Pradesh, Uttarakhand, J&K, North Eastern states and the islands.

ii.In the  Previous phases of UDAN a total of 106 Airports & 31 Heliports have been constructed.

iii.The government has set a target of starting air services from more than 100 new airports on one thousand new routes in the next 5 years, with a focus on starting air services in inaccessible and remote areas. Time has been given till December 11,2019 for potential bidders and to ask their queries.