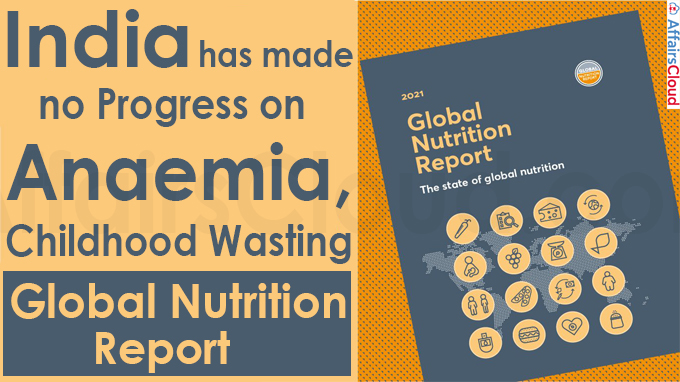 According to the (GNR, 2021) 2021 Global Nutrition Report: The state of global nutrition, India is making no progress or worsening to meet the targets on Anaemia & Childhood wasting.  The report also states that India is on course to meet 3 of the 13 global nutrition targets on Childhood stunting, Childhood overweight and Exclusive breastfeeding.

i.India is among 53 countries ‘on course’ to meet the target for childhood stunting, yet around 34.7 % of children under 5 years of age are still affected.

ii.This is higher than average for Asia, where nearly 21.8% are affected by stunting.

i.India is among the 161 countries that have made no progress or worsening in terms of reducing anaemia.

iii.In 2016 around 52.6% of Indian women were anaemic and since then India has recorded a rise in anaemic Indian women.

India is among the 105 countries that are ‘on course’ to meet the target for ‘childhood overweight’.

i.India is among the 53 countries that are ‘on course’ to meet the target for ‘exclusive breastfeeding’.

ii.In India around 58 % of infants aged 0-5 months are exclusively breastfed.

i.India is among the 23 countries that have made no progress or worsening in terms of reducing childhood wasting.

ii.Childhood wasting refers to a child whose weight is low for his or her height. It is the result of rapid weight loss or the failure to gain weight.

iii.Around 17.3% of children in India are affected by childhood wasting which is higher compared to the average for Asia which is around 8.9%.

India does not have adequate data on prevalence of ‘low birth weight’.

i.India has made only limited progress in achieving the diet-related non-communicable disease (NCD) targets.

ii.India has made no progress in achieving the target for obesity, where 6.2% of adult women and 3.5% of adult men are living with obesity.  This is lower compared to the regional average of 10.3% for women and 7.5% for men.

iii.It is estimated that diabetes has affected 9.0% of adult women and 10.2% of adult men.

About The Global Nutrition Report:

ii.The report sets out progress towards global nutrition targets and provides a concise data-focused update on the state of diets and nutrition in the world.

iii.The report also evaluates the impact of poor diets on human health and the planet, assesses the nutrition financing landscape and provides a comprehensive overview of reporting on past Nutrition for Growth (N4G) commitments.