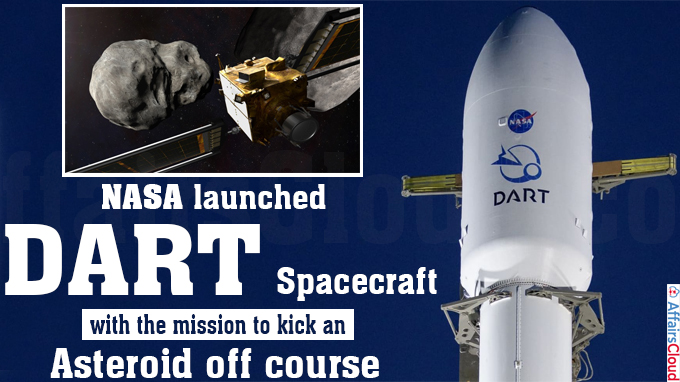 Goal – To slightly alter the trajectory of Dimorphos, a ‘moonlet’ around 525 feet (160 metres, or two Statues of Liberty) wide that circles a much larger asteroid called Didymos (2,500 feet in diameter). The Didymos-Dimorphos pair orbit the Sun together.

i.Impact might happen within the fall of 2022 when the binary asteroid system is 6.8 million miles (11 million kilometres) from Earth, nearly the closest level they ever get.

ii.The asteroid is not a threat but they belong to a category of Near-Earth Objects (NEOs) where asteroids and comets approach our planet within 30 million miles.

i.NASA’s DART will be the first-ever space mission to demonstrate asteroid deflection by the use of “kinetic impact technique,” to alter the orbit of an asteroid i.e. the spacecraft will smash into a space rock to change its direction.

ii.Dart mission will target a pair of asteroids that closely orbit each other – known as a binary which intercepts in September 2022 as it approaches within 6.7 million miles of Earth.

iii.Didymos is the larger of the two objects that measure around 780m across, while Dimorphos is its smaller companion which is 160m wide.

iv.Objects of Dimorphos’ size could explode with many times the energy of a typical nuclear bomb, damaging a large area.

Note – Asteroids with a diameter 300m and larger could cause continent-wide destruction, while those bigger than 1km would produce worldwide effects.

The Spacecraft also carries sophisticated instruments for navigation and imaging, including the Italian Space Agency’s Light Italian CubeSat for Imaging of Asteroids (LICIACube) to observe the accident and its aftermath.

ii.Astronomers have simulated deflecting an asteroid away from Earth with the force of nuclear blasts.

iii.The 1967 Outer Space Treaty prohibits the placement or use of nuclear weapons in space.