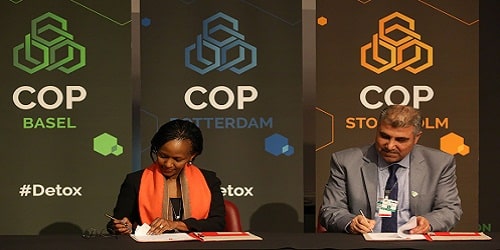 Key Highlights
i. The 14th meeting of the Conference of the Parties (COP-14) to the Basel Convention has taken the view to address environmentally sound management (ESM) of waste. The purpose is to develop technical guidelines on waste generated from electronics (e-waste), persistent organic pollutants (POPs), lead acid batteries and mercury as well as certain hazardous waste treatment methods.
ii. COP-14 has discussed among parties about matters related to implementation of the Convention which include the strategic framework entry into force of the Ban Amendment and the Cartagena Declaration on the Prevention, Minimization and Recovery of Hazardous Wastes and other wastes.
iii. According to the framework agreed in the 11th meeting of the Open-ended Working Group (OEW G11) of the Basel Convention held from September 3 to 6, 2018 in Geneva and the outcomes from the COP-14 include: